This is the California dogface poster that Fran Keller and Greg Kareofelas created. It's available at the Bohart Museum of Entomology.
Few people have seen California's state insect in the wild, but now thousands will this week--on TV.

The California dogface butterfly, Zerene eurydice, and its Auburn habitat will be featured on KVIE Public Television's "Rob on the Road" show at various times throughout the week. The piece is on prime time at 7:55 p.m. on Thursday, July 13 (in between Antiques Roadshow and Huell Howser's California's Gold). It is also online at http://vids.kvie.org/video/3002661342/

Found only in California, the dogface butterfly thrives at the Shutamul Bear River Preserve near Auburn, Placer County.  The 40-acre preserve, part of the Placer Land Trust, is closed to the public except for specially arranged tours.

The butterfly is there because its larval host plant--false indigo, Amorpha californica--is there. The plant is difficult to grow outside this habitat, according to Placer Land Trust manager Justin Wages. Perhaps, he says, it's the unique geography and soil near the Bear River. The California dogface butterfly made the news several years ago when UC Davis Bohart Museum of Entomology associates Greg Kareofelas and Fran Keller and former UC Davis student Laine Bauer, teamed to publish a 35-page children's book, The Story of the Dogface Butterfly. The trio visited the Auburn site for their research, and Kareofelas also reared and photographed a dogface butterfly at his home in Davis. The author, Fran Keller, is an entomologist and is now an assistant professor at Folsom Lake College. (She received her doctorate in entomology from UC Davis with major professor Lynn Kimsey, director of the Bohart and professor of entomology). Both Kareofelas provided photos for the book, and Bauer, the drawings, including depictions of the life cycle of the butterfly reared by Kareofelas. Fran Keller, who holds a doctorate in entomology from UC Davis and is now an assistant professor at Folsom Lake College, authored "The Story of the Dogface Butterfly." (Photo by Kathy Keatley Garvey)
Kareofelas and Keller also teamed to create a dogface butterfly poster of the male and female.  Both the book and the poster are available at the Bohart Museum of Entomology, 1124 Academic Surge, on Crocker Lane, UC Davis campus.

As for the book, it's favored by adults and children and is a  classroom treasure. "The ecology, life cycle, taxonomy and conservation issues presented are relevant to grades K-6 that can be used in classroom curriculum,” Keller says. It also includes a glossary.

Kareofelas, who has served for several years as a volunteer docent for the Placer Land Trust's dogface butterfly tours, helped guide the recent tour that included Rob Stewart of "Rob on the Road" and UC Master Gardeners.

He and Keller, along with others,  answered questions about the biology and history of the colorful butterfly, also known as "the flying pansy."

Recent dogface sightings elsewhere? Shapiro saw one this year on July 4 at Willow Slough, Yolo County. Kareofelas recently saw one in his backyard, where he is growing a false indigo. And Shapiro remembers seeing one in his driveway in Davis in 1972.

However, the dogface butterfly is more prevalent at the Shutamul Bear River Preserve than anywhere else, and Rob Stewart of "Rob on the Road" and the UC Master Gardeners were delighted to see it.

Fact is, although few have seen the dogface butterfly in the wild, all of us with California driver's licenses have seen it--but probably never noticed it. Look on your driver's license--right beneath your signature--and there it is! 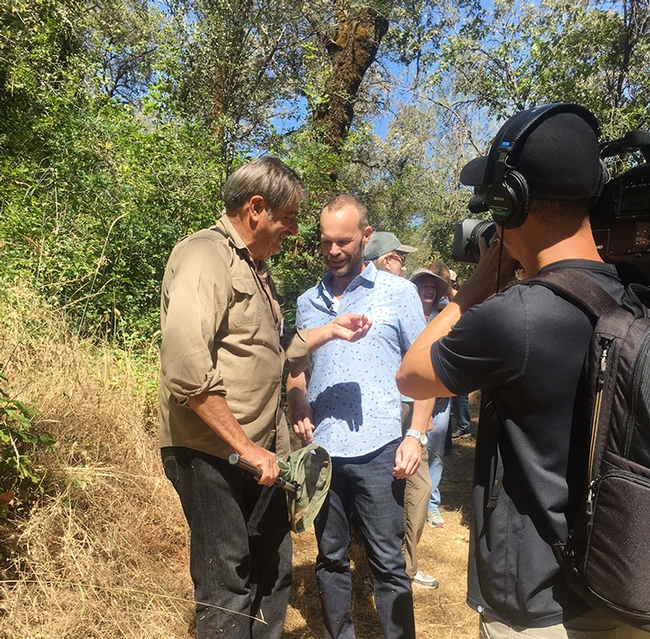 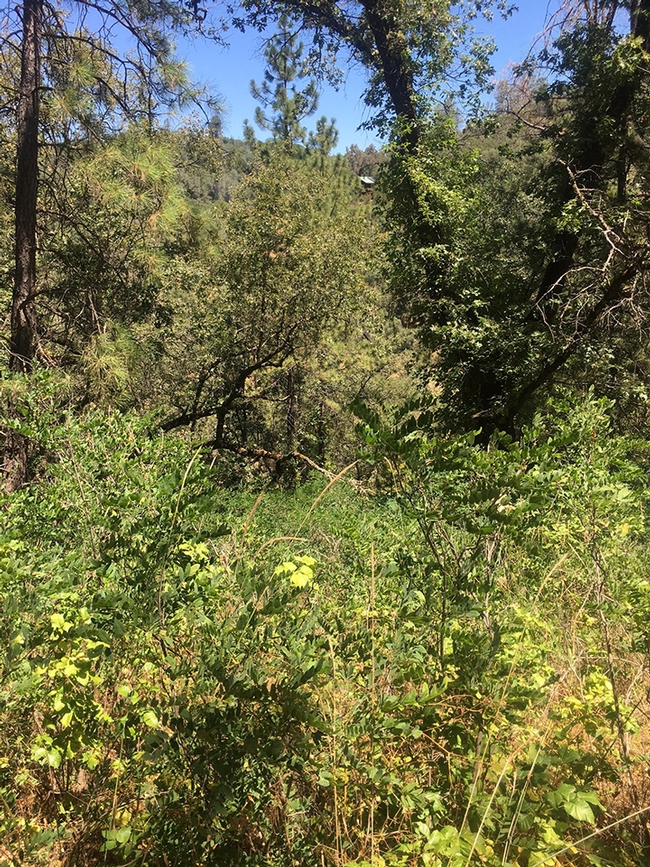 The Shutamul Bear River Preserve near Auburn, Placer County, encompasses 40 acres and is considered "the" best habitat for the dogface butterfly. (Photo by Fran Keller) 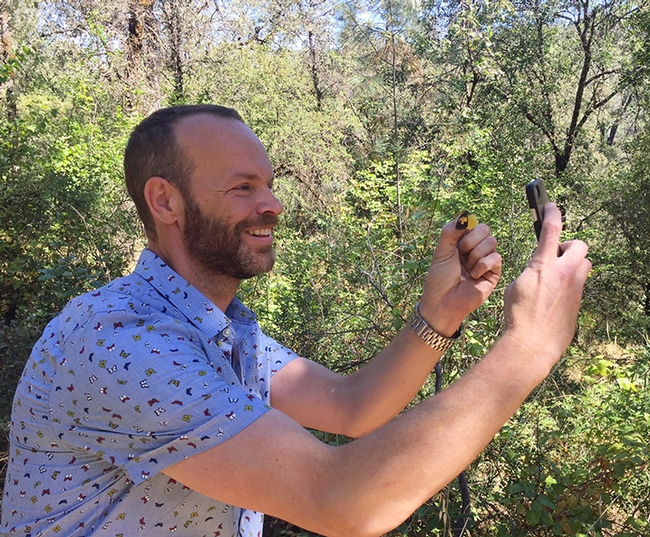 Rob Stewart of "Rob on the Road" takes a selfie with a California dogface butterfly. (Photo by Greg Kareofelas) 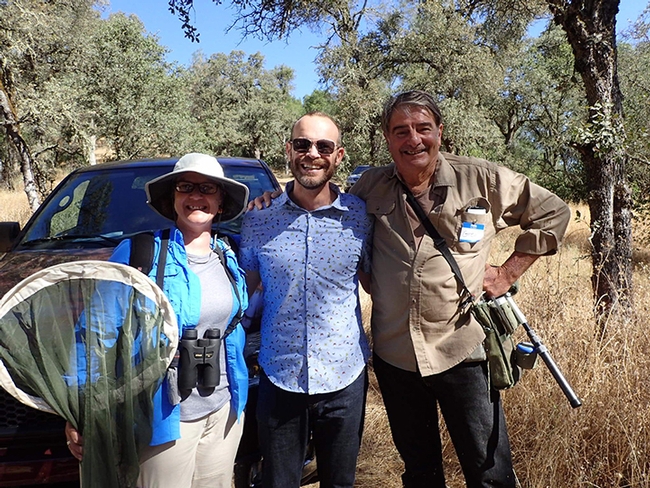 Bohart Museum of Entomology associates Fran Keller (left) and Greg Kareofelas pose with Rob Stewart of "Rob on the Road." Keller, an entomologist with a doctoral degree from UC Davis, is an assistant professor at Folsom Lake College, and Kareofelas is a naturalist/photographer. 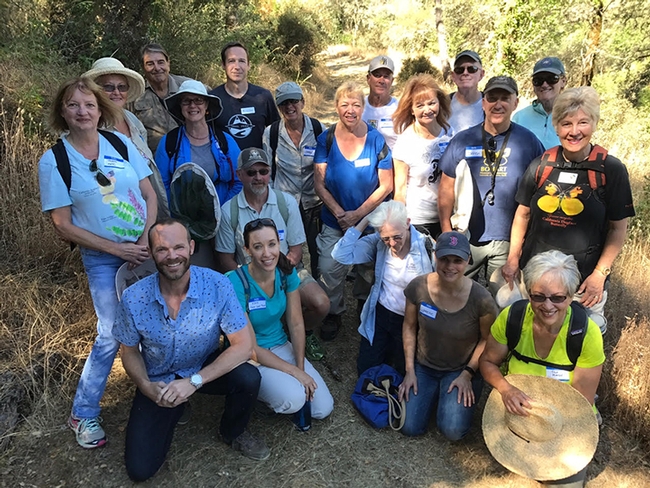 This is the group, including UC Master Gardeners, who toured the dogface butterfly habitat. Rob Stewart of "Rob on the Road" is kneeling, front left. Many wore butterfly shirts. Justin Wages, Placer Land Trust manager, is back row, fourth from left.
Tags: California dogface butterfly (13), Fran Keller (48), Greg Kareofelas (75), Justin Wages (1), Placer Land Trust (5), Rob on the Road (2), Rob Stewart (1), UC Master Gardeners (5)
Comments: 2
Comments:
by Peggy [GB] Beltramo
on July 13, 2017 at 3:13 PM
I was lucky enough to be along on this walk (as a Placer County Master Gardener). It was truly a magical day!
by Davis
on May 22, 2020 at 1:46 PM
Yo, this is COOL, sir, COOL!!!
Leave a Reply: