Geoffrey Attardo at his desk. He recently published a book of his macro photos, "Small World: Life Is in the Detail." (Photo by Kathy Keatley Garvey)
Medical entomologist/geneticist Geoffrey Attardo, the newest member of the UC Davis Department of Entomology and Nematology faculty, is a scientist with multiple and widespread interests, ranging from tsetse flies, mosquitoes and kissing bugs to macro photography, 3D modeling and stand-up comedy.

Attardo joined the department July 1 as an assistant professor after 13 years at the Yale University School of Public Health, New Haven, Conn., first as a postdoctoral fellow from 2004 to 2008, and then as associate research scientist and research scientist.

Geoffrey Attardo is eager to begin work. His research interests include the physiology and molecular biology of disease vectors, reproduction, nutrition, symbiosis, genetics, metabolomics, gene regulation, vector/parasite interactions “and any place the data leads me!”

“My lab will focus on aspects of the physiology of tsetse fly reproduction,” Attardo said. “The goal of this research is to identify and understand key aspects of tsetse's reproductive biology.” Tsetse flies, prevalent in much of sub-Saharan Africa, are known for vectoring human African trypanosomiasis, also known as sleeping sickness.

A native of Poughkeepsie, N.Y., Geoffrey received his bachelor's degree in entomology from the University of Massachusetts, Amherst, in 1994 and his doctorate in genetics from Michigan State University, East Lansing, in 2004.

A career in science came naturally. “My parents are both somewhat scientifically inclined, so I may have taken after them,” he says. “My father has a doctorate in metallurgy from Columbia University and led a long successful career at IBM. My mom was a full-time mom, but has a background in microbiology with a master's degree from Yale.” Close-up of a gravid tsetse fly (Glossina morsitans morsitans).(Photo by Geoffrey Attardo)
“I got my start in science working as an undergraduate researcher” at the University of Massachusetts in the lab of John Edman, who moved to UC Davis in 1999. There Geoffrey reared and worked with various mosquito species and kissing bugs for four to five years. He also worked on aspects of mosquito ecology, reproduction and nutrition with Edman and Thomas Scott, now both UC Davis emeriti professors of entomology.

“I decided to develop my career in science and went to work in Dr. Alexander Raikhel's lab at Michigan State University as a graduate student. I was always drawn to understanding the molecular mechanisms underlying the extreme biology of insects and Dr. Raikhel's lab provided that opportunity. There I focused on the molecular biology of egg development in mosquitoes.”

After receiving his doctorate, Attardo joined the Yale lab of Serap Aksoy to work on tsetse flies. “In terms of fascinating physiological adaptations, the tsetse fly is one of the champions of the insect world!” Attardo says. “In addition to being vectors of a deadly disease, Trypanosomiasis, these flies have undergone amazing alterations to their physiology relative to other insects. Some examples of this are their ability feed exclusively on blood, their obligate relationship with a bacterial symbiont, the fact that they lactate and that they give birth to fully developed larval offspring. The opportunity to study the adaptations these flies have made is like opening a toy chest for an insect physiologist. My work in tsetse has focused on the molecular biology underlying the adaptations associated with the development of lactation, symbiosis, male and female mating interactions/physiology and nutrient metabolism and mobilization.” A gravid tsetse fly (Glossina morsitans morsitans). (Photo by Geoffrey Attardo)
Another highlight of his career: the publication of the tsetse fly genome in the journal Science. He served as the annotation coordinator, editor and illustrator for the publication. One of his tsetse fly images graced the cover. “The publication of the genome opened up new avenues of research in tsetse that were previously unavailable and facilitates more work to be done on this important disease vector by making all this data available to the community,” Attardo related. “I am working on following up this work with a paper comparing the genome sequences of six different species of tsetse flies that differ in their geographic, ecological, host preference and vectorial capacity characteristics. We hope to connect the underlying genetics of these flies with with these differing life traits to understand their biology, evolution and identify potential targets with which to control this vector.”

His tsetse research also includes identifying the tsetse milk proteins and the genes that code for them. Said Attardo: “They are really interesting as they are functionally very similar to milk proteins in mammals!”

In newly published research (June) in the Proceedings of the Royal Society B, he and his colleagues examined the relationship between the fly and its obligate symbiotic bacteria called Wigglesworthia. “Tsetse flies without their symbionts are unable to reproduce and abort their larvae before the complete development,” he says. “We showed that the bacteria supplements the flies diet with B vitamins and that the fly appears to scavenge nucleotides (the component molecules of DNA and RNA) made by the bacteria. The B-vitamins made by the bacteria enable the fly to metabolize nucleotides, sugars, amino acids and produce chemicals essential for its overall metabolism.” A jumping spider peers at the photographer in one of Geoffrey Attardo's latest macro images. He captured this image in Hamden, Conn., on his back porch.
Attardo's work has drawn national and international attention. He won the 2010 Fogarty Grantee Photo Contest with an image of a tsetse fly. The Yale School of Public Health magazine featured his images in the fall of 2011 in “An Eye for the Tsetse Fly.” (Link to https://news.yale.edu/photos/eye-tsetse-fly?page=18). The Los Angeles Times publicized his video of a “tsetse fly giving birth” on its website at http://www.latimes.com/science/sciencenow/79993724-132.html.

Attardo traces his interest in insects and macro photography to his childhood. “I had always been fascinated with insects, but my earliest memory was feeding insects to a beautiful black and yellow garden spider (Argiope aurantia) that had set up her web in front of the bay window of our house. I was especially interested in spiders. Another early memory was being sick in bed with the croup and reading--and rereading multiple times--through a picture book I had on spiders that had amazing macro photos. I found jumping spiders particularly fascinating. From that point on I had been fascinated with seeing insects up close, but it was not until I was able to afford a good digital camera and the appropriate lenses that I was able to get into insect photography.”

Attardo's first professional camera was a Canon that he received in the mid-1990s.

His first digital? A Canon Rebel XT. He now uses a Canon EOS 5D Mark IV with macro lenses, the MPE-65mm and the 100mm.

“I love macro photography because it reveals the amazing details that are present in things that many people take for granted or for mundane,” Attardo says. “Insects especially benefit from macro treatment as I find that most people have no idea about the type of amazing creatures they have living in their yard or even in their house. I'm often asked if my photos were taken in South America, Africa or Asia as the insects appear to be so exotic, however, they are often surprised --and sometimes dismayed--to find out that most of my photos are taken locally.”

The many shapes, sizes and designs of insects fascinate him. “I am a bit of a science fiction geek and I find insects to be almost alien in how different they are from vertebrates. It is like traveling to another planet when you start to magnify the world. I am endlessly fascinated with all the different strategies and adaptations they have developed to survive/thrive in places where many animals couldn't. I think by taking photos of them it allows me to open a window and share my fascination with people who don't normally give much consideration to insects and treat them just as bugs or an annoyance.”

“As a scientist, I have taken my fascination with the magnifying things to the extreme in that my work tends to focus on the molecular biology underlying the physiology of insect adaptations. The molecular adaptations are just as amazing as the morphological ones. However, they are even harder to visualize and explain to lay people. I enjoy illustration and artwork as well, so when it is not possible to take a picture of something I am working on, I try to create a visual representation of it.”

“I also really enjoy digital illustration and have recently gotten into 3D modeling. My first model is a tsetse fly for which I was able to use my macro photos to texture. See (https://sketchfab.com/models/263750e5a9c54c56a77d63ac06f2f317

He and his wife, Meg Gurley and their son, Douglas, 13, are settling into their home in Davis. "Meg is a full-time mom currently," he says, "and a Master Gardener. We have a symbiotic relationship as she grows the plants that attract the insects I like to photograph. Douglas and I are both into computers and computer gaming together."

Future lab plans? Attardo said three undergraduates will join his lab in the fall, helping him to “get the lab set up and running.” He hopes to hire a lab manager, a postdoc and “a couple of graduate students.”

A few of the projects he is excited to pursue:

Geoffrey Attardo invites “anyone who is interested in meeting me and talking science, photography or anything else to stop by the lab and visit! My door is always open--unless I have a grant due!”

He can be reached at gmattardo@ucdavis.edu. 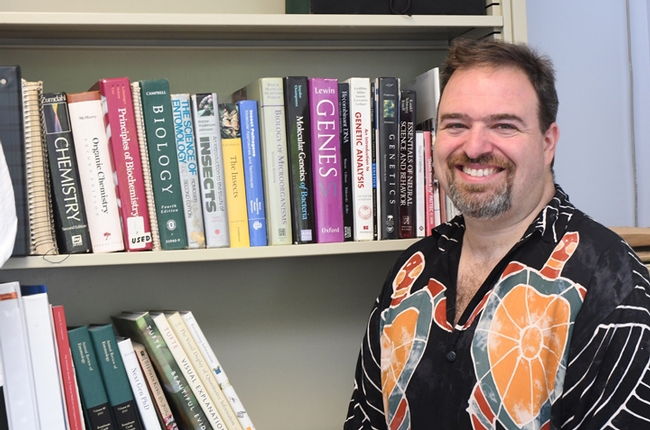