Bug Squad
sitenum=63
Happenings in the insect world
A Honey of a Day--And It Gets Better! Elina Lastro Niño
Saturday, Aug. 19 promises to be a honey of a day--in more ways than one! And it gets better!

It's a day when we applaud our bees, and the bee scientists, beekeepers, commercial breeders, and all the educational, scientific and research organizations that friend them, fund them, or fuel them.

Indeed, one third of the food we eat is pollinated by bees. What many folks don't realize is that honey bees are not native to the United States. European colonists brought them here in 1622, and it wasn't until 1853 when a beekeeper in the San Jose area introduced them to California.

Statistics provided by the National Honey Bee Day officials, help tell the story of the industry:

Bees will also take center stage at the 40th annual conference of the Western Apicultural Society (WAS) at the University of California, Davis. The conference, to take place Sept. 5-8 in the Activities and Recreation Center, is quite special because the organization was founded at UC Davis. WAS president is Extension apiculturist emeritus Eric Mussen of the UC Davis Department of Entomology and Nematology promises an educational program, complete with speakers, networking, tours and a silent auction.

Among those speaking will be Extension apiculturist Elina Lastro Niño, who will address the crowd on "The Impact of Varroa on Honey Bee Reproductive Castes (Queen Bee, Worker Bee and Drone): Where Will the Research Lead Us?” Her talk is at 8:30 a.m. on Thursday, Sept. 7. A varroa mite on a drone pupa (male bee pupa). (Photo by Kathy Keatley Garvey)
Niño, based in Briggs Hall and at the Harry H. Laidlaw Jr. Honey Bee Research Facility, UC Davis Department of Entomology and Nematology, wears a number of hats, including the protective bee veil. Through her extension activities, she works to support beekeepers and the beekeeping industry. Her lab offers a variety of beekeeping courses and educational opportunities for beekeepers, future beekeepers, other agricultural professionals and the public. Most recently, her lab has implemented the first-ever California Master Beekeeper Program. (E. L. Niño bee lab courses: http://eepurl.com/cjRern, CAMBP interest list: http://eepurl.com/cjRzY1). She serves as the faculty director of UC Davis Department of Entomology and Nematology's half-acre bee garden, the Häagen-Dazs Honey Bee Haven, located next to the Laidlaw facility.

Her research interests encompass basic and applied approaches to understanding and improving honey bee health and particularly honey bee queen health. Ongoing research projects include understanding the synergistic effects of pesticides on queen health and adult workers in order to improve beekeeping management practice, testing novel biopesticides for efficacy against varroa mites, a major pest of bees, and understanding the benefits of supplemental forage in almond orchards on honey bee health. (Read her apiary newsletters, access her lab website at http://elninobeelab.ucdavis.edu/ or her lab Facebook page at https://www.facebook.com/elninolab/)

Writer Stephanie Parreira of the UC Statewide Integrated Pest Management Program (UC IPM) recently interviewed Niño for a podcast on bee pests and how to manage them, using IPM methods. The podcast appears on the UC ANR Green Blog. You can read the transcript here.

Niño mentioned that varroa mites remain the key concern of beekeepers. "In fact, when I first started my position here as an extension specialist at UC Davis, I asked beekeepers what is one of the things that they would like me to focus on, and about ninety-nine percent of them said varroa mites," she said in the podcast. "Varroa mites are a problem because they basically suck honey bee blood, or honey bee hemolymph, they transmit viruses, [and] they can suppress immune genes in developing and adult bees. So they can kill the colony, basically, if they're not managed properly. We have seen in our own colonies that if we do not treat or manage varroa mites, we know that we will lose that colony over winter."

If you're interested in attending the WAS conference and learning more about bees, you can register here.  The speakers represent a wide spectrum of expertise and topics, from top-bar beekeeping to pesticides to how to keep your colonies healthy.  Or, you can contact President Mussen at ecmussen@ucdavis.edu for more information. 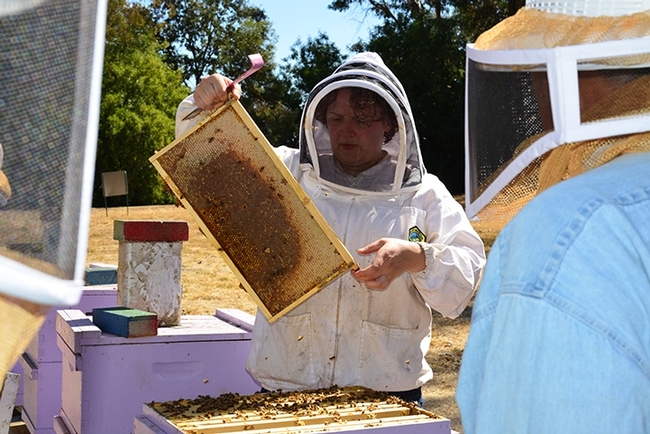 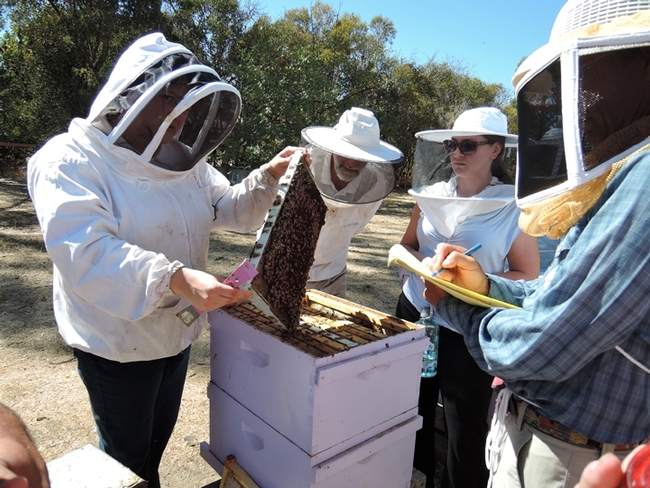