Bug Squad
sitenum=63
Happenings in the insect world
Migratory Monarchs Are on Their Way! They're on their way.

Entomologist David James of Washington State University, Pullman, Wash., who studies the migration routes and overwintering sites of the Pacific Northwest monarch population, told us last Friday, Aug. 25: "Many monarchs have been/are being tagged in Southern Oregon! One has already been recovered showing southern movement, so its likely they will be heading your way very soon!" He maintains a network of Pacific Northwest citizen scientists who rear, tag and release monarchs.

Last year on Sept. 5, Labor Day, a tagged monarch--a male--from his citizen scientist program in Ashland, Ore., fluttered into our yard in Vacaville, Calif. for a five-hour "pit stop" on his way to an overwintering site, probably in Santa Cruz or Pacific Grove. We followed him around, watching him sip nectar from Mexican sunflowers and butterfly bushes. Then we contacted James, sending him photos and information, and wrote about the encounter on a Bug Squad blog.

The tag read "monarch@wsu.edu," and serial number "A6093," which tied the butterfly to Ashland citizen scientist Steve Johnson of the Southern Oregon Monarchs Advocates (SOMA). Johnson tagged and released "A6093" on Sunday, Aug. 28.

"So, assuming it didn't travel much on the day you saw it, it flew 285 miles in 7 days or about 40.7 miles per day," James related.  "Pretty amazing. So, I doubt he broke his journey for much more than the five hours you watched him--he could be 100 miles further south by now. Clearly, this male is on his way to an overwintering colony and it's possible we may sight him again during the winter in Santa Cruz or Pacific Grove!”

As far as we know, the Ashland reared-and-released monarch wasn't sighted again.

Fast forward to this year. We are seeing fewer monarchs this year than last. Last year we reared and released 60 monarchs in our small-scale monarch program. This season, however, we've noticed a drastic drop in the number of visitors to our pollinator garden, which includes plenty of milkweed, their host plant, and even more nectar sources. So far we've reared and released only four monarchs--three females and a male. Four chrysalids remain.

"Yes, it's been a dismal year for monarchs in many areas of the West, unfortunately," James wrote in an email on Aug. 29. "I think it stems from the late winter storms that hit the California coast just as the overwintering colonies were beginning to disperse... I think the survivors that produced the first spring generation of larvae were fewer in number than 'normal.'  Consequently, the next generation (that begins migrating into the Pacific Northwest) was also smaller than usual.  Many areas of the PNW had very few monarchs this year."

The good news, though, the associate professor said,  is "that where monarchs did colonize in Washington, Idaho and Oregon, they had good breeding success, resulting in locally 'normal' or above normal sized summer populations.  So I'm expecting an overwintering population comparable to last year. Thus, you should see a definite increase in numbers of monarchs coming through your yard over the next month!"

We hope so! Meanwhile, keep a lookout for those WSU-tagged monarchs. If you see one, try to photograph it and mail the image and information to David James at monarch@wsu.edu. 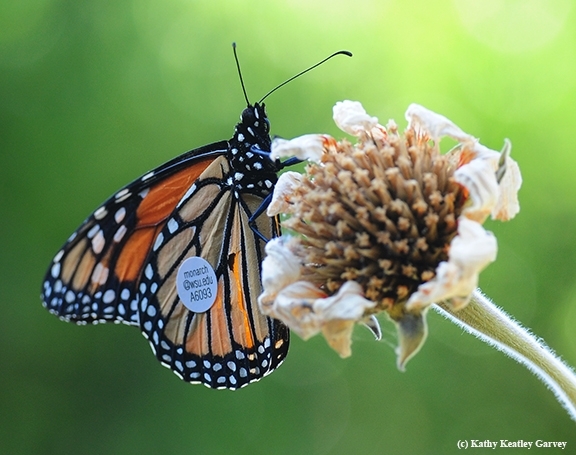 This 2016 tagged monarch butterfly flew 285 miles in 7 days from Ashland, Ore. on Aug. 28 to Vacaville, Calif., on Sept. 5, or about 40.7 miles per day, according to WSU entomologist David James. (Photo by Kathy Keatley Garvey) 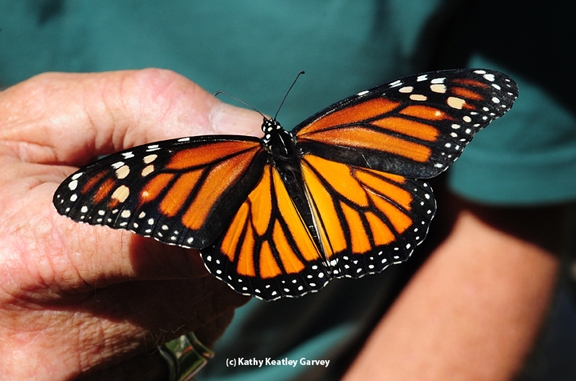