A Sept. 7 article in Reuters, headlined "Monarchs in Western United States Risk Extinction, Scientists Say," indicated that "Monarch butterflies west of the Rocky Mountains are teetering on the edge of extinction, with the number wintering in California down more than 90 percent from the 1980s, researchers said in a study published on Thursday."

Reuters' reporter Laura Zuckerman wrote that "The migratory monarchs of the western United States have a 63 percent chance of extinction in 20 years and an 84 percent chance in 50 years if current trends continue, according to the study."

The scientists, led by Washington State University conservation biologist Cheryl Schultz, published their work in the journal Biological Conservation. It was funded by the U.S. Fish and Wildlife Service, which is weighing the prospect of offering federal protection for monarch butterflies through the Endangered Species Act. The Xerces Society for Invertebrate Conservation is among those spearheading the effort.

Noted lepidopterist Arthur Shapiro, UC Davis distinguished professor of evolution and ecology who has studied butterflies, including the monarchs, for more than four decades, doubts that the western monarchs are teetering on the edge of extinction.

Shapiro, who maintains a website, Art's Butterfly World. says that yes, the western monarchs have been declining faster than the eastern monarchs, as per the Biological Conservation paper. However, during the drought, California populations appeared to rebound significantly, and it is not known whether the trend will persist, he says.


Their comprehensive and well-researched work, titled "Understanding a Migratory Species in a Changing World: Climatic Effects and Demographic Declines in the Western Monarch Revealed by Four Decades of Intensive Monitoring," was funded in part by the National Science Foundation. Their Oecologia abstract: "Migratory animals pose unique challenges for conservation biologists, and we have much to learn about how migratory species respond to drivers of global change. Research has cast doubt on the stability of the eastern monarch butterfly  (Danaus plexippus) population in North America, but the western monarchs have not been as intensively examined. Using a Bayesia hierarchial model, sightings of western monarchs over approximately 40 years were investigated using summer flight records from ten sites along an elevational transect in Northern California."

"Multiple weather variable were examined, including local and regional temperature and precipitation. Population trends from the ten focal sites and a subset of western overwintering sites were compared to summer and overwintering data from the eastern migration. Records showed western overwintering grounds and western breeding grounds had negative trends over time, with declines concentrated early in the breeding season, which were potentially more severe than in the eastern population."

"Temporal variation in the western monarch also appears to be largely independent of (uncorrelated with) the dynamics in the east. For our focal sits, warmer temperatures had positive effect during spring. These climatic associations add to our understanding of biotic-abiotic interactions in a migratory butterfly, but shifting  climatic conditions do not explain the overall, long-term, negative population trajectory observed in our data."

In acknowledgments, Shapiro and his colleagues thanked the Xerces Society for Invertebrate Conservation and the North American Butterfly Association for the monarch counts and making the data publicly available.

Meanwhile, since late August, the western monarchs (Arizona, California, Nevada, Oregon, Washington, Idaho and Utah) have been winging their way to their overwintering spots to forested groves along coastal California.

And then, around February, they will head inland to start the process again.

It's an amazing phenomenon.

As I write this, four monarchs are gathering some flight fuel, nectaring from two M's: milkweed and Mexican sunflower in our little pollinator garden in Vacaville, Calif., part of their migratory path to the coast. They flutter from flower to flower, seemingly unaware of the California scrub jay circling them and a photographer zeroing in on them. Or the rain about to fall. 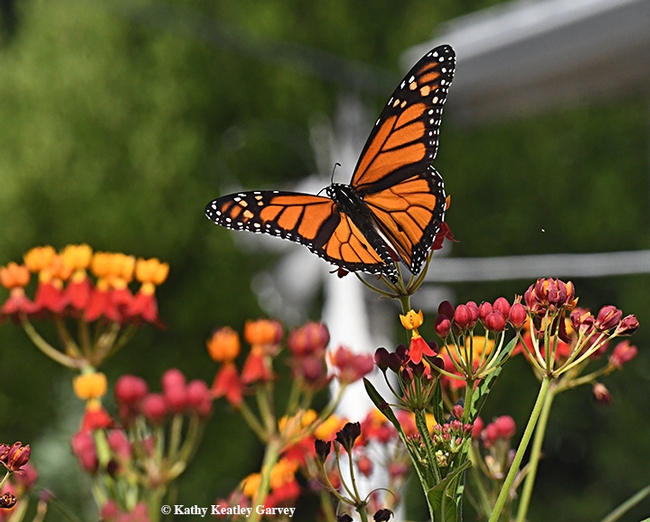 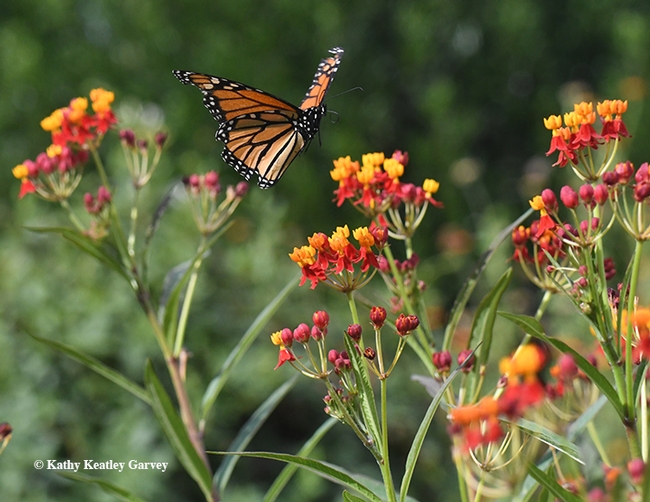 A male monarch heads for another flower on tropical milkweed, Asclepias curassavica, in Vacaville, Calif. (Photo by Kathy Keatley Garvey) 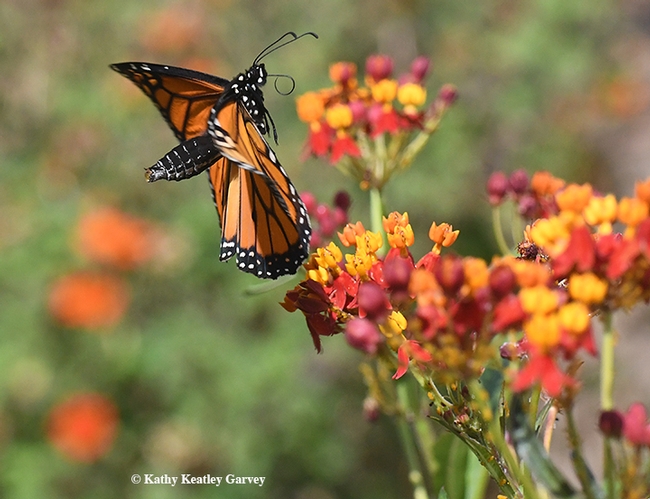 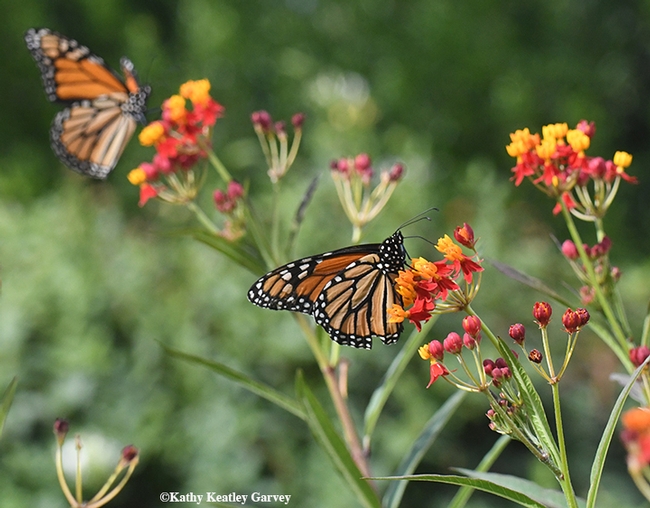 I am a Master Gardener in San Jose and co-lead an ornamental flower project @ the new Martial Cottle Agricultural Park. We have found Monarchs are very attracted to Asclepias curassavica with no harmful affects. This year we have grown a lot of A. fasicularis in our trial beds and so far have not seen any Monarchs attracted to them.

I've been trying to germinate A speciosa and have not been very successful. I've tried every method that I've found including stratification and warm water soaking. I've had most luck with the warm water soaking but not enough to be able to distribute plants.

I'd appreciate any advice for germinating them.

I bought one A.speciosa 'Davis' plant @ Annie's Annuals this summer.

I'm wondering if you have seeds for either of these that I may buy as we'd really like to grow more and offer them to the public.

Milli Wright - Master Gardener Santa Clara County
by Kathy Keatley Garvey
on September 13, 2017 at 2:33 PM
Thank you for your comment. Louie Yang, associate professor of entomology at UC Davis--he does monarch research--says about seed germination: "I’ve not really had any issues germinating those seeds if they are fresh. I have had low germination rates on older seeds that we’ve had for several years, but fresh seed usually has a >90% germination rate with minimal processing. When germination rates are low, we sometimes cold stratify (soak in water in the refrig for 4-7 days), and will sometimes germinate on filter paper. But we usually are able to just plant seeds directly into pots or plugs. I hope that helps!"
by Dawn Patton
on November 24, 2017 at 2:45 PM
Hedgerow Farms in Winters, CA sells native milkweed plugs and seeds. I got some last year but found that Monarchs prefer. Out of over 150 caterpillars, I only found 2 caterpillars on the A. speciosa.

Diabolical Ironclad Beetle: Crush It With a Car and It Still Survives
January 25, 2023