This was all that was left of the fly pinata following the Bohart Museum of Entomology's Halloween party. (Photo by Kathy Keatley Garvey)
Have you ever hit a piñata? Hit it and smashed it to smithereens?
It was probably a Fiesta-ish piñata--maybe a colorful unicorn, donkey, or pony, right?
Bet it wasn't a fly.
And bet it wasn't a fly from the genus Acrocera and family Acroceridae.
An Acrocera fly proved to be a big hit last Friday night at the pre-Halloween gall-a at the Bohart Museum of Entomology, University of California, Davis.
Open to Bohart Museum associates and members of the Bohart Museum Society, the event drew dozens of costumed characters, from honey bees to black widows to a tarantula hawk.
But it was the anatomically correct fly, masquerading as a piñata,  that grabbed the most attention. It was the work of UC Davis entomology PhD student Charlotte Herbert; her fiancé, George Alberts; and the Bohart crew.
It was all in keeping with UC Davis alumna Nicole Tam's creative  drawing on the party invitation that featured an Acrocera fly,  a larva, and a spider.  Mama Fly is telling her little one, "You look wonderful, my little larva!"  and the little one, in close association with a spider (her food), is responding with:  "Thanks, Mom!

You could almost feel the love. Or the larva.
Entomology PhD student Jessica Gillung calls the Acroceridae family "a remarkable group of endoparasitoids of spiders." She knows the family well; it's the subject of her thesis dissertation. She studies "the evolution and systematics of Acroceridae, focusing on understanding host usage patterns and trends in morphological variation."
"The piñata depicts a species of the genus Acrocera, one of the most species rich genus in North America," Jessica explained.  "These rare and elusive flies lay the eggs on the ground or vegetation, and the little larva is in charge of finding itself a suitable host. Upon finding the host, the larva enters its body and feeds inside until it's mature to come outside and pupate. They eat everything from the spider; nothing is wasted."
Charlotte, who studies Asiloidea phylogenetics with a focus on Asilidae (aka assassin flies) and their predatory lifestyle and venom, came dressed as Maggie the Maggot or an Acroceridae larva, about to pupate and turn into a fly. She added a spider corpse to her costume "as my meal in honor of the party invitation made by Nicole Tam."
Charlotte's fiance, George, came as "Farmer Maggot," or his interpretation of Farmer Maggot from "The Lord of the Rings."
And Jessica? What did she portray at the Halloween party?
A spider? No. A fly? No. Herself? No.
A Procyon lotor. A raccoon.
(Editor's Note: More photos of the variety of costumes to follow in Wednesday's blog) 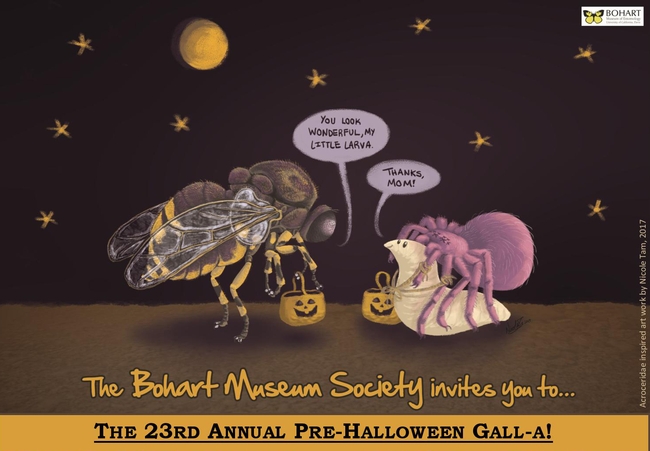 The Halloween party invitation from the Bohart Museum of Entomology featured an Acroceridae fly and larva. (Images the work of Nicole Tam, UC Davis alumnus) 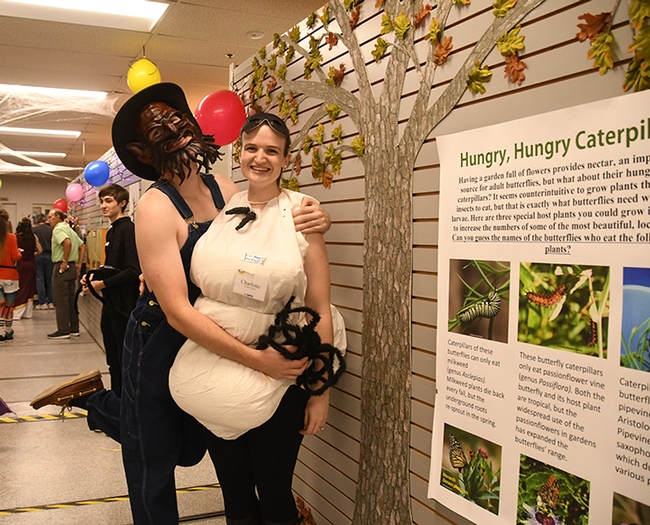 UC Davis PhD student Charlotte Herbert as"Maggie the Maggot," and her fiance, George Alberts, as "Farmer Maggot," or his interpreation of Farmer Maggot from "The Lord of Rings." (Photo by Kathy Keatley Garvey) 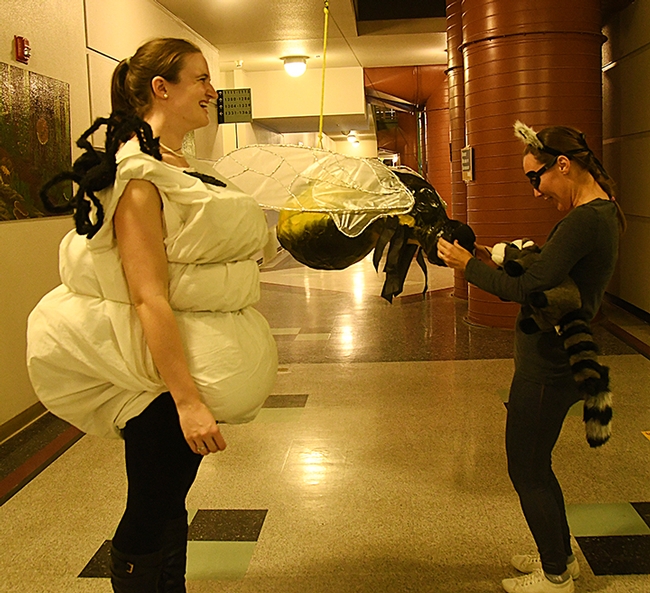 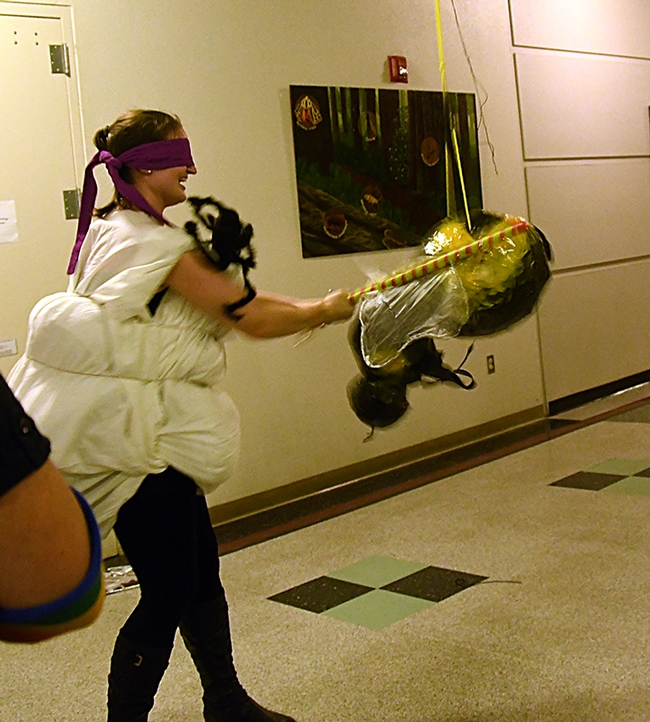 UC Davis PhD student Charlotte Herbert takes a swing at the fly pinata that she and her fiance, George Alberts, created for the Bohart Museum of Entomology Halloween party. (Photo by Kathy Keatley Garvey) 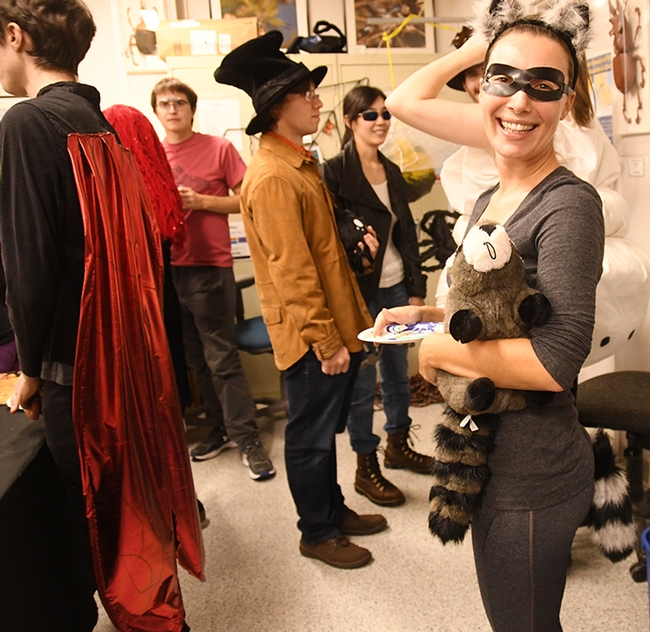