UC Davis PhD student Jessica Gillung researches the Acroceridae family, which she calls "a remarkable group of tiny parasitoids." (Photo by Kathy Keatley Garvey)
The Bohart Museum of Entomology will host a "Parasitoid Palooza!" open house from 1 to 4 p.m., Saturday, Nov. 18 in Room 1124 of the Academic Surge Building.

The event, free and open to the public and family friendly, is an annual open house focusing on parasitoids.

"An insect parasitoid is a species whose immatures live off of an insect host, often eating it from the inside out,"  said Tabatha Yang, education and outreach coordinator of the Bohart Museum. "It is part of their life cycle and the host generally dies."

Among the presentations or topics:

Members of the Acroceridae are "rare and elusive flies lay the eggs on the ground or vegetation, and the little larva is in charge of finding itself a suitable host," Gillung said. "Upon finding the host, the larva enters its body and feeds inside until it's mature to come outside and pupate. They eat everything from the spider; nothing is wasted." The tachinid fly lays its eggs on caterpillars. There are more than 8,200 described species. (Photo by Kathy Keatley Garvey)
Her dissertation involves "the evolution and systematics of Acroceridae, focusing on understanding host usage patterns and trends in morphological variation."

Lauren Camp, who received her doctorate from UC Davis, studying with major professor Steve Nadler, professor and chair of the UC Davis Department of Entomology and Nematology, will display a variety of nematodes amd answer questions.

She describes nematodes in one word as "worms" and in expanding,  “Nematodes are an amazing phylum of organisms--they exist in almost every known environment on the planet, and different species eat everything from bacteria and fungi to plant and animal tissue." Diagnostic parasitologist Lauren Camp of the UC Davis School of Veterinary Medicine, will display nematodes. (Photo by Kathy Keatley Garvey)
"I find parasites particularly fascinating, because they are dependent on another organism (or organisms) for part or all of their life cycle," Camp said.

The late UC Davis entomologist Richard M. Bohart (1913-2007) researched Strepsiptera, or twisted-wing parasites, for his doctorate in 1938. Both the Bohart Museum and an entire family of Strepsiptera, the Bohartillidae, are named in honor of Professor Bohart. 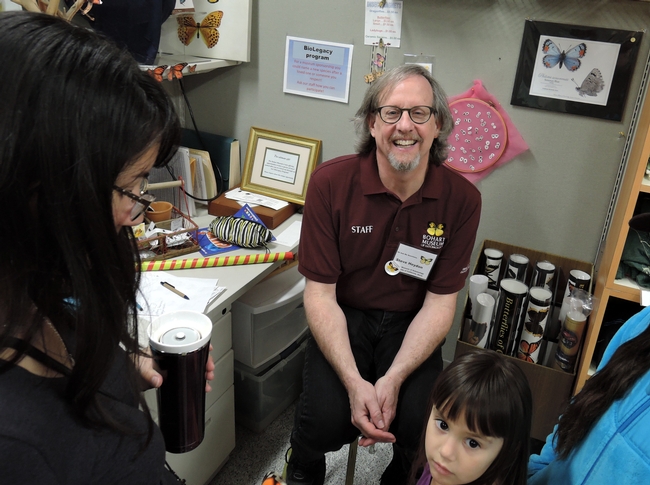