You can begin the process by registering on the California Master Beekeeper Program (CAMBP) website, announced program director and California Extension Apiculturist Elina Lastro Niño, based in the UC Davis Department of Entomology and Nematology.

Go to https://cambp.ucdavis.edu/levels/apprentice.  Applications are due May 1. Those accepted into the program will be notified by June 1. CAMBP is about giving back to the community and becoming a better beekeeper and mentor, said Niño, who is based in the UC Davis Department of Entomology and Nematology. The Master Beekeepers engage in community outreach, communicate with a growing network of fellow master beekeepers, and receive discounts to classes offered by UC Davis Extension Apiculture and Honey and Pollination Center,

Bernardo Niño, the founding program coordinator of CAMBP, congratulated the Class of 2017 and presented each with a pin. New program manager is Master Beekeeper Wendy Mather of El Dorado Hills.  Bernardo Niño who recently accepted a position as head of bee research and development at UBEES Inc., an organization headquartered in New York City. Bernardo will be based in Davis area. He will continue to work with CAMBP as the educational advisor.

"Honey bees are arguably the most important managed pollinator and are used as the primary pollinator for over 30 crops in California many of which are considered specialty crops such as almonds," wrote Niño in her successful grant application. "Therefore, the food security of our state and our nation depends largely on robust and healthy honey bee populations. However, in recent years, U.S. beekeepers have been reporting annual colony losses of up to 45 percent. These losses are attributed to many pathogens and pests associated with bees, as well as pesticide exposure and lack of access to plentiful and diverse forage."

"Colony losses have also prompted those who have never kept bees before to try their hand at beekeeping in an effort to help honey bee conservation," she pointed out. "Currently, in California there are an estimated 11,000 backyard and small-scale beekeepers, with many of them belonging to one of 35 beekeeper associations within the state. While these associations often serve as hubs of information transfer, the information provided is not always accurate or supported by research findings. Considering the importance of California to the US agriculture and the fact that almost 80 percent of the U.S. colonies start their pollination and honey production routes in almonds, it is clear that there is an urgent need to develop a comprehensive, science-based, and state-wide apiculture curriculum."

Niño noted that "Development of these educational opportunities will help minimize potentially disastrous consequences, such as increased pest and pathogen transfer or spread of Africanized bees which are considered a public-health risk, due to lack of understanding of proper honey bee husbandry. To fulfill this need we established the first-ever California Master Beekeeper Program which provides California-centric, contemporary, research-based training in apiculture." 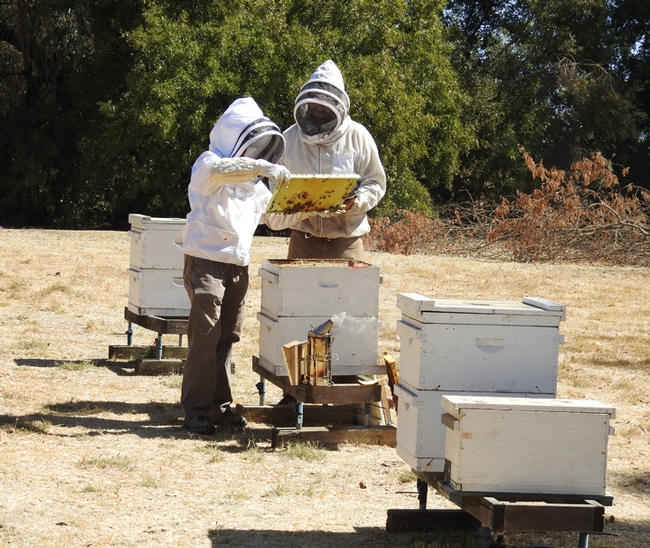 This was the scene at the Harry H. Laidlaw Research Facility, UC Davis, for a testing of applicants for the California Master Beekeeper Program. (Photo by Kathy Keatley Garvey) 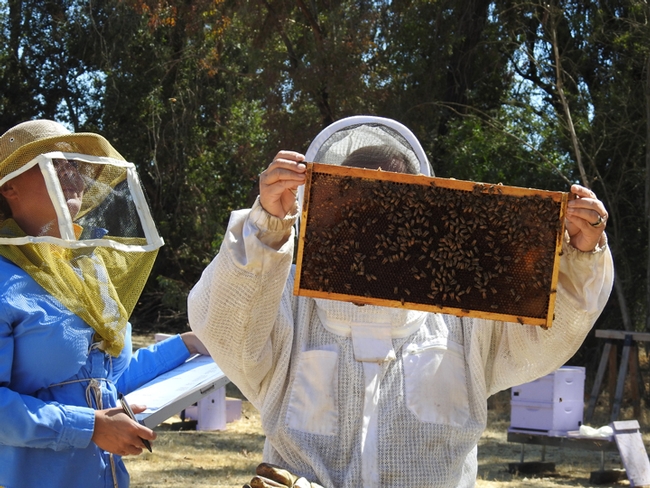 An applicant for California Master Beekeeper examines a frame, while a proctor looks on. (Photo by Kathy Keatley Garvey) 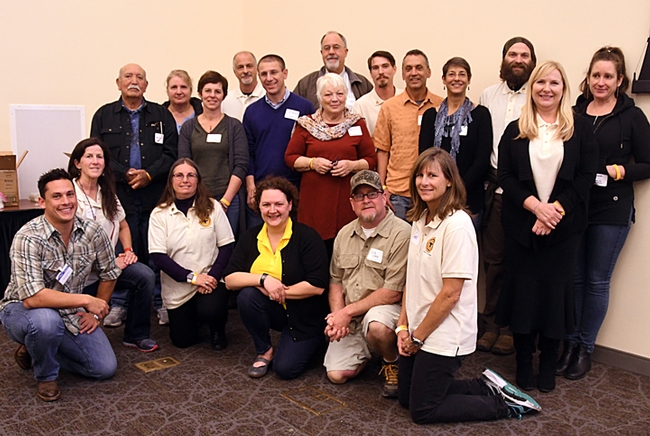