It's not the prettiest of plants.

No matter. The honey bees love it.

Lacy phacelia (Phacelia tanacetifolia), a leggy three-foot plant with clusters of light blue to purple flowers, attracts not only honey bees but syrphid flies, bumbles bees and other pollinators.

Some folks call it "the honey plant" because it's considered one of the top 20 honey-producing flowers.

Native to the southwestern United States and northern Mexico, it's an annual that's used as a cover crop and as bee forage. It's especially popular in Europe and in California vineyards.

We planted some in our bee friendly garden to see what it would attract. Last Sunday one of the first insects it drew was an aged honey bee, her thorax worn of hair and her wings ragged.

The slow-moving bee foraged among the delicate blossoms. Indeed, the soft breeze moved faster than she did.

Then, lift off and she was gone. 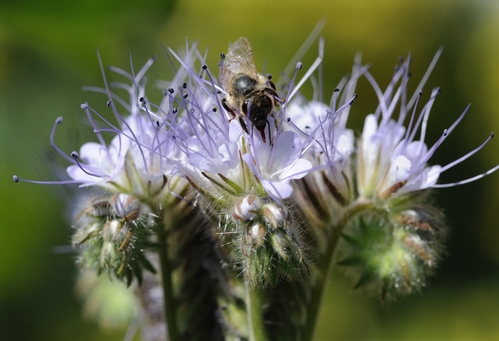 Aged Bee
AGED BEE forages among the blossoms of the lacy phacelia (Phacelia tanacetifolia). This is considered one of the top 20 honey-producing flowers. (Photo by Kathy Keatley Garvey) 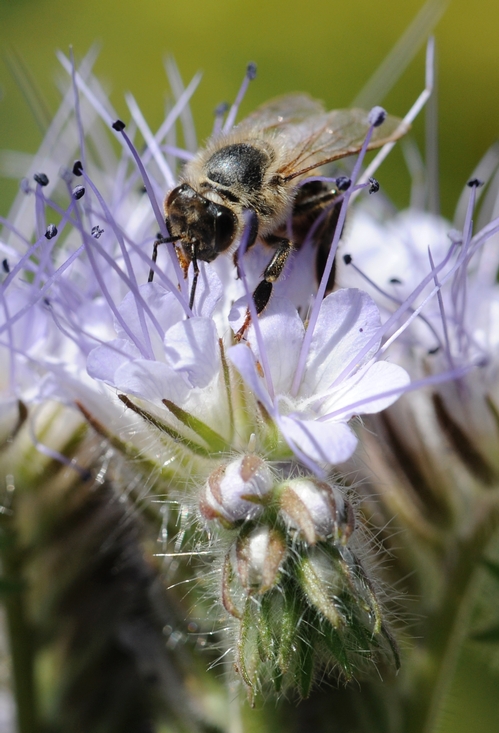