Bug Squad
sitenum=63
Happenings in the insect world
It's National Pollinator Week: Do You Know Where Your Bee T-Shirts Are? This is a favorite among bee enthusiasts. It's the work of former UC Davis graduate student Danny Klittich, now a Ph.D working as a California central coast agronomist.
You've heard the phase, "wear your heart on your sleeve"--which means to show your emotions openly.

How about wearing a pollinator on your heart?

The UC Davis Entomology Graduate Student Association (EGSA) offers a wealth of t-shirts as part of its year-around fundraising efforts. It's for a good cause. The EGSA, comprised of UC Davis graduate students who study insect systems, is an organization that "works to connect students from across disciplines, inform students of and provide opportunities for academic success, and to serve as a bridge between the students and administration," according to EGSA president Brendon Boudinot, an ant specialist/doctoral student in the Phil Ward lab.

The t-shirts can be ordered online at https://mkt.com/UCDavisEntGrad/, according to medical entomologist and EGSA treasurer Olivia Winokur, a doctoral student in the Christopher Barker lab.  She serves as the t-shirt sales coordinator and can be reached at ocwinokur@ucdavis.edu.

One of the favorite bee t-shirts depicts a honey bee emerging from its iconic hexagonal cells. It's the 2014 winner of then graduate student Danny Klittich, who recently received his doctorate in entomology from UC Davis and now works as a California central coast agronomist.

"The Beetles" t-shirt is EGSA's all-time best seller. Instead of the English rock band John Lennon, Paul McCartney, George Harrison and Ringo Star crossing Abbey Road in single file (that's the iconic image on the cover of their album, Abbey Road), think of The Beetles (four insects) crossing Abbey Road in single file. Beneath the images of the beetles are their family names: Phengogidae, Curculionidae, Cerambycidae and Scarabaeidae. Think glowworm, snout, long-horned, and scarab beetles.

One thing's for certain: Pollinators matter.  Not just during National Pollinator Week but every day of the year. 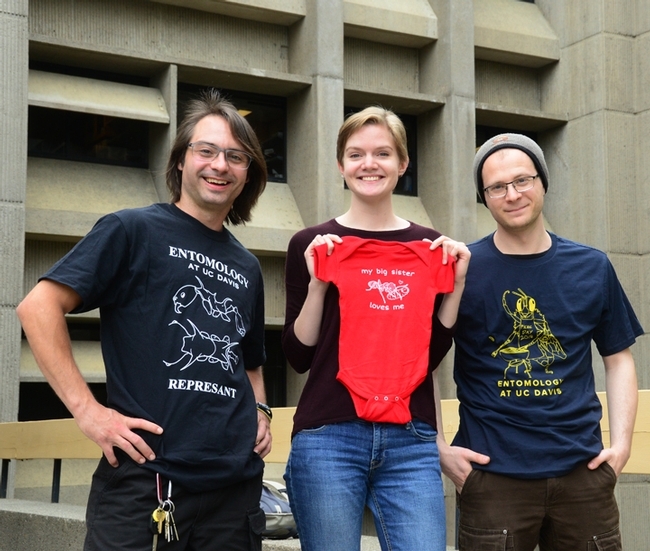 EGSA's 2018 t-shirt winners: Brendon Boudinot wearing his t-shirt, "REPRESANT"; Jill Oberski with her onesie, "My Sister Loves Me" and Corwin Parker wearing his "BarBeeCue" t-shirt. All are available online at https://mkt.com/UCDavisEntGrad/. (Photo by Kathy Keatley Garvey) 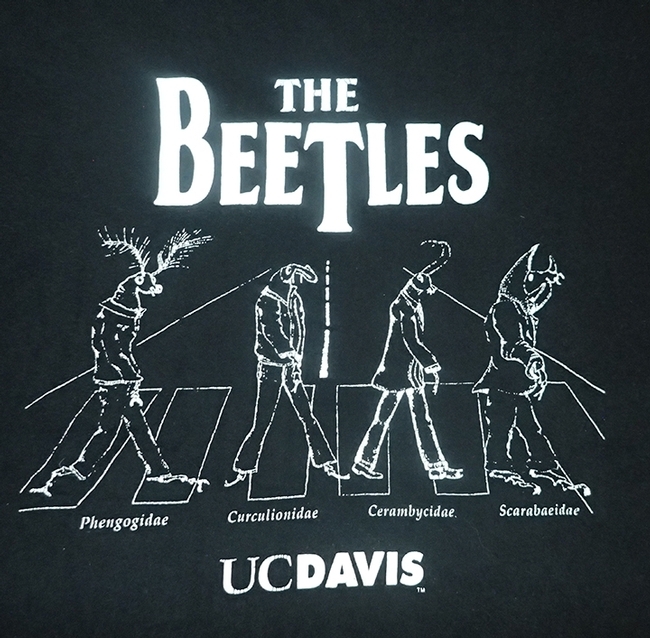