steveseybolduc
There's a killer in our midst, and a chemical ecologist will tell us all about it.

Seybold (right), a research entomologist with the Chemical Ecology of Forest Insects, USDA Forest Service, Pacific Southwest Research Station, Davis, will speak on “Walnut Twig Beetle and Thousand Cankers Disease:  Characterizing an Emergent Threat to Forest and Agroecosystems in North America” at a noonhour seminar sponsored by the UC Davis Department of Entomology. It will take place from 12:10 to 1 p.m., Wednesday, May 19 in 122 Briggs Hall on Kleiber Drive.

You can listen live to the webcast. The lecture later will be archived on the department's website.

Thousand cankers disease is a newly discovered disease that is becoming a “significant problem” in California and seven other western states and could very well spread throughout the United States, researchers say.

“Thousand cankers disease, caused by a newly described fungus spread by the tiny walnut beetle, has been detected in 15 California counties from Sutter County to Los Angeles,” said Seybold, a chemical ecologist and affiliate of the UC Davis Department of Entomology.

How can a tiny little beetle fell a mighty tree? When it's associated with a specific fungus, a newly described fungus that's so new it has no name.

When it tunnels into the wood, the walnut twig beetle (Pityophthorus juglandis) carries the fungus (proposed name of Geosmithia morbida) with it.  Often the first symptoms of the disease are flagging and yellowing leaves and branch dieback. Affected branches show sap staining and pinhole-sized beetle holes. Peel back the bark and you'll see dark stains caused by the fungus.

To date, the disease has been found in Utah, Colorado, New Mexico, Arizona, Idaho, Washington as well as California.

“The potential spread of the disease to the eastern United States is now of great concern, especially through movement of infested/infected raw wood and firewood,” Seybold said.

The walnut twig beetle, believed to be native to Arizona, California, New Mexico, and Mexico, was first collected in Los Angeles County more than 50 years ago.

The disease was first noticed in canker-riddled black walnuts in Utah and Oregon in the early 1990s, but scientists attributed that to environmental stress. In 2006, plant pathologist Ned Tisserat and entomologist Whitney Cranshaw of Colorado State University identified the pathogen and characterized its association with the beetle in declining black walnut trees in central Colorado.

This is a very serious disease of black walnuts. Let's hope they don't go the way of the American chestnut or the American elm. 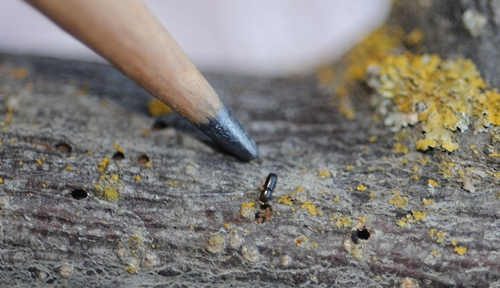