Bug Squad
sitenum=63
Happenings in the insect world
Noah Crockette: From an 11-Year-Old Bohart Intern to an 18-Year-Old Entomology Student at Cornell Noah Crockette encouraging youngsters at the Solano Ag Day, Vallejo, to get acquainted with insects at the Bohart Museum of Entomology. (Photo by Kathy Keatley Garvey)
“Go as far as you can [young scientists]. The world needs you badly.”—E.O Wilson.

That sign greets visitors to the Bohart Museum of Entomology, University of California, Davis, and that's exactly what Noah Crockette, 18, an intern there since age 11 and the winner of an international beetle research award as a teenager, plans to do.

This week he's already gone far--a distance of more than 2700 miles--from Davis to Ithaca, N.Y., where he is majoring in entomology at Cornell University.

Fondly known as “The Beetle Boy,” Noah won the 2015 Coleopterists' Society Award (senior division) for his project, “Survey of the Dung Beetles of Stann Creek, Belize.”

He volunteers at the Bohart Museum, home of nearly eight million insect specimens, and a live petting zoo of Madagascar hissing cockroaches, walking sticks and tarantulas. He has helped out with open houses, outreach programs and collecting trips.

“Yes, Noah has been volunteering here for quite a few years,” said Lynn Kimsey, director of the Bohart Museum of Entomology and professor of entomology at UC Davis. “We've seen him go from a middle school kid to a very mature 18-year-old. He's a great kid, always ready with a big smile, great attitude and really hard working. Smart, too. He should do very well at Cornell. We already miss him.” The cake featured a snow scene. (Photo by Kathy Keatley Garvey)
Last Friday Bohart Museum officials, museum associates and volunteers turned out in force to honor "the great kid," with a going-away party.

Two Cornell University alumni--Tabatha Yang, the Bohart Museum's education and outreach coordinator,  and UC Davis doctoral candidate student Emily Bick of the Christian Nansen lab, serenaded him with the Cornell fight song. Yang's degree is in general biology, and Bick's degree in entomology. After they sang the fight song, they told him how cold the winters are! At age 16, Noah Crockette participated in an insect collecting trip to Belize. He won an international award to do beetle research. (Photo by Fran Keller)
Noah arrived on the Cornell campus on Wednesday, Aug. 15. “The first thing I did when I got here was grab coffee from Ithaca Coffee Company and drive around campus," he related. "I also got to watch some of the birds and insects flying around which was cool because many of them are so different from what I'm used to in California. I'll have to work on learning all the life around here now! I saw some eastern tiger swallowtails around and a few cool blow flies.”

His major advisor is drosophila (fruit flies) expert Patrick O'Grady, who taught at UC Berkeley for 12 years before joining the Cornell faculty last year. His ecology professor is UC Davis alumnus Anurag Agrawal, an ecologist who received his doctorate in 1999, studying with Richard Karban.

His acceptance into Cornell, one of the top-ranked entomology programs in the country, came in 2017. Noah graduated in 2017 from The Met Sacramento High School, and Cornell offered him a one-year student transfer contract for the fall of 2018.

“I have always been interested in bugs but my interest in entomology started in sixth grade,” Noah said. “I mostly became interested in insects through my internship at the Bohart and participating in the undergraduate UC Davis Entomology Club (open to all interested persons). Before then I had only known that I was interested in zoology and started going to the Ent Club after learning about it from talking to (UC Davis forensic entomologist and club advisor) Robert “Bob” Kimsey at UC Davis Picnic Day. After attending the club for awhile, Danielle Wishon (club president and entomology major) and Bob got me connected with the Bohart to start the internship from which my interest grew.”

Career plans? Noah is keeping his options open as to specialty, but he wants to work in research. Beetles fascinate him, especially scarab beetles. “I have a tendency towards scarab beetles,” he said. “I particularly like the tribe Cyclocephalini, the masked chafer beetles. I really like that they are a Dynastines like the Hercules beetles but lack any sort of horns or other glitzy features. Even though they are small and brown, I love the subtle beauty of the markings which remind me of the Rorschach ink tests.

”I also really love venom so I have also thought about going into venom research but would like to grow more familiar with it before considering it more.”

As a Bohart Museum intern and associate, Noah collected insects twice in Belize on Bohart-affiliated collecting trips “where I was able to get field work experience in entomology as well as herpetology and ornithology.”  Fran Keller, assistant professor, Folsom Lake College, and David Wyatt, an entomology professor at Sacramento City College, led the collecting trips. Keller, who served as his mentor, received her doctorate in entomology from UC Davis, studying with Lynn Kimsey.

“My last trip to Belize," Noah said, "was when I completed my Coleopterists' Society project in which I designed and constructed 12 baited pitfall traps which I used to survey the dung beetle species on the property as well as determine their preferred bait, between human feces, pig feces, chicken manure, rotten chicken, and rotten fruit."

In his freshman year, Noah taught an entomology class to elementary students, and as a senior project, organized a museum day at Shriners Hospital for Children.

Outside of entomological pursuits, he enjoys hiking, kayaking and birdwatching. “I really love the outdoors,” he said. “Last year after my trip to Belize I was also given the opportunity through my school to go on a month-long backpacking and kayaking trip through the National Outdoor Leadership School (NOLS) in Alaska. I also played rugby for C.K. McClatchy High School during my senior year which was a fun experience and I now plan on continuing with the sport. At home I like to keep reptiles and invertebrates--mostly tarantulas--as pets and enjoy collecting zoology related books and objects.”

During the going-away party, a photo of Noah Crockette flashed on the wall-mounted computer screen. It pictured him at about age 14, enthusiastically working with insects.

Doing what he loves.

Not overlooked was the quote from noted scientist E. O. Wilson “Go as far as you can [young scientists]. The world needs you badly." 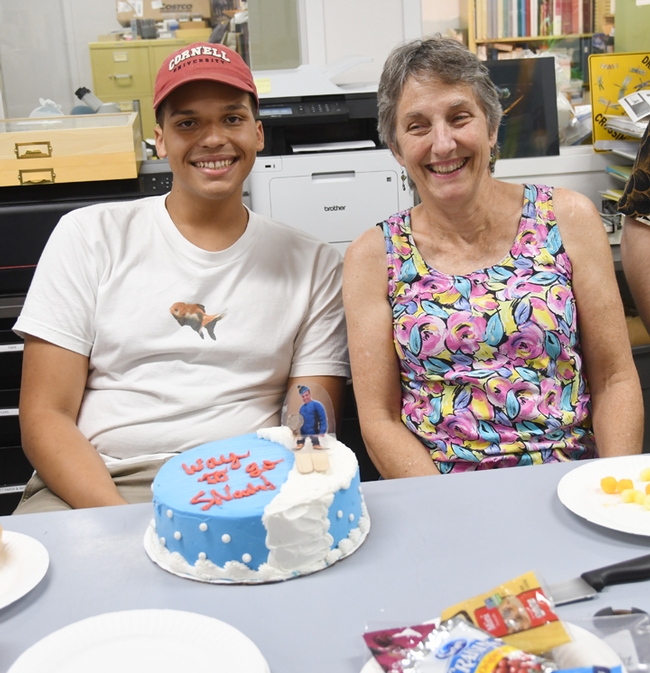 Lynn Kimsey, director of the Bohart Museum of Entomology, shares a laugh with Noah Crockette, now an entomology major at Cornell. (Photo by Kathy Keatley Garvey) 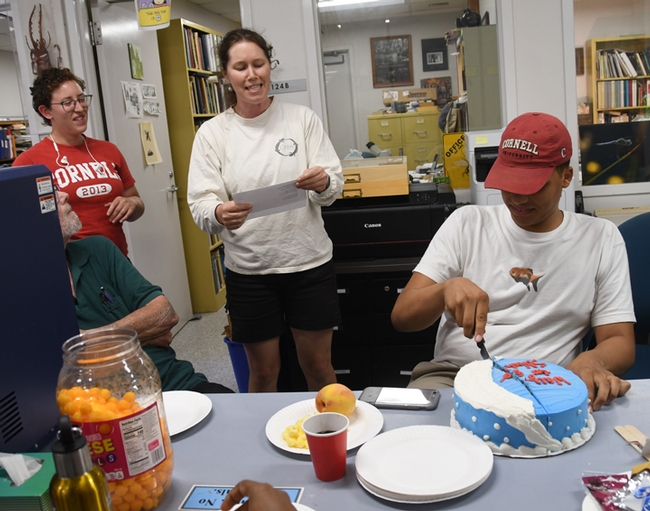 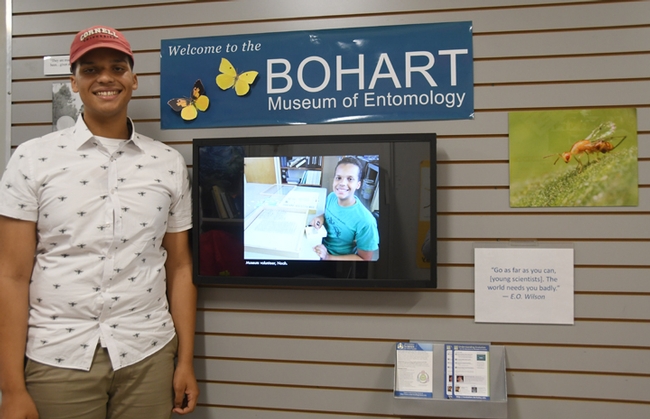 Noah Crockette stands by a wall-mounted computer screen with an image of him at age 14. (Photo by Kathy Keatley Garvey) 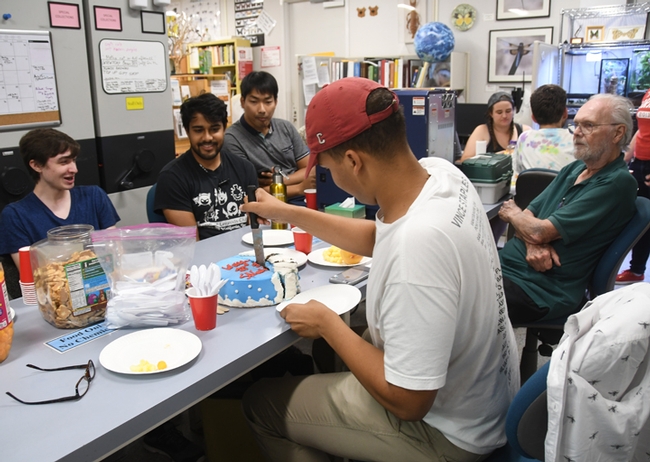