The aggressive (cannabilistic?) caterpillar that attacked his or her sibling, is now a beautiful chrysalis. (Photo by Kathy Keatley Garvey)
Curiosity didn't kill the 'cat.

We were delighted to find 10 monarch caterpillars (the first of the year!) on our narrowleaf milkweed a couple of weeks ago in our Vacaville pollinator garden--but not so delighted to see what happened to one of them.

We tucked the 10 'cats in two Bohart Museum of Entomology butterfly habitats: six in the larger-sized one, and four in the medium-sized one. We filled each with lots of milkweed so they'd have plenty to eat and plenty of room to grow.

They ate. They ate. And they ate some more. They began to pupate and form those gorgeous jade green chrysalids rimmed with gold.

Just as they always do.

All was well and good except for what occurred next in the medium-sized habitat.

One of the 'cats spun its silklike mat, attaching itself to the top of the netted  habitat. It was j'ing (or hanging upside down in a J-shape) and beginning to spin rapidly to form a chrysalis. Two of its siblings were already chrysalids.

Now, j'ing is a vulnerable stage in the wild. Parasitoids, such as tachinid flies and Trichogramma wasps, can and do lay their eggs in them. And they're also, in this helpless state, fair game for such predators as birds.

But this was a "safe environment," right? Wrong.

Just as the j'ing caterpillar was spinning, an aggressive (cannibalistic?) caterpillar left its milkweed and climbed up the net and attacked it, killing it. A stream of fluid cascaded down the side of the habitat.  Then the combative caterpillar climbed back down and continued eating milkweed. Several days later, it pupated and formed a chrysalis. (See image above.)

Meanwhile, its sibling remains quite dead, never completing the metamorphosis we expected it to do. 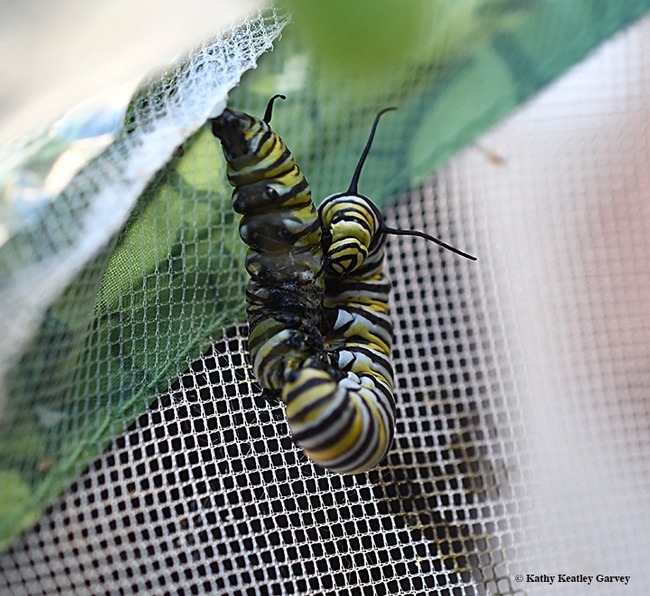 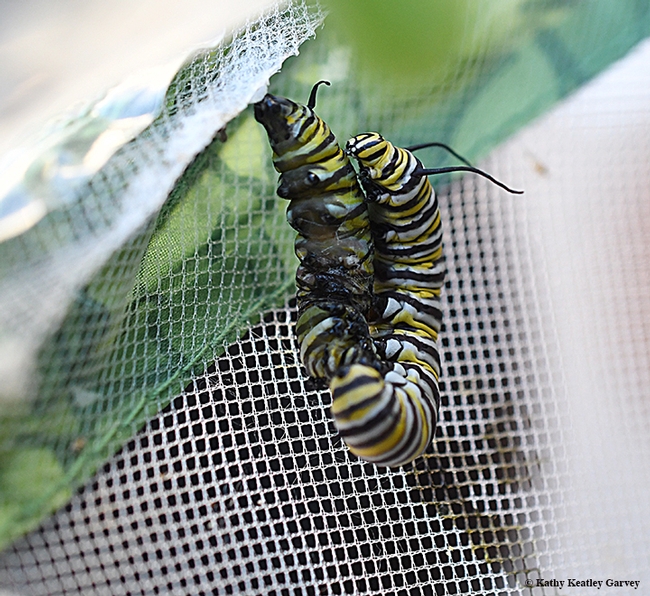 The combative monarch caterpillar latches on tight to the 'cat about to pupate. (Photo by Kathy Keatley Garvey) 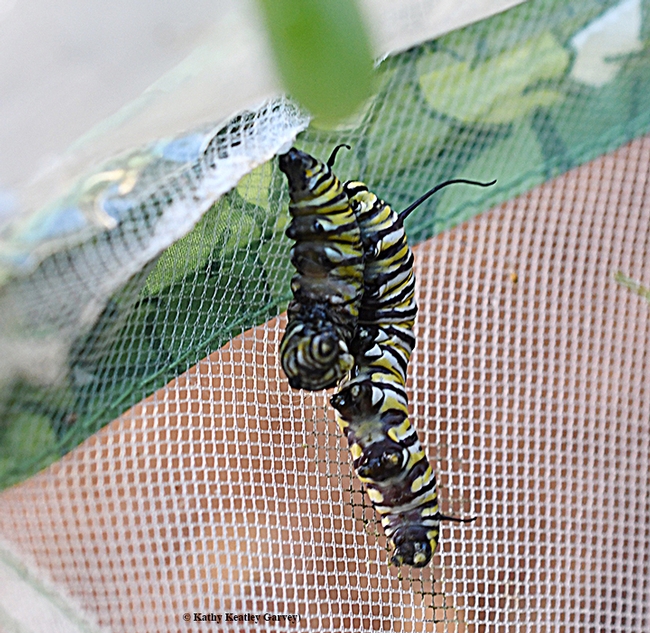