This ruby-tailed wasp image by Levon Biss hangs in the hallway at the entrance to the Bohart Museum of Entomology.
Picture this!

When you visit the Bohart Museum of Entomology at the University of California, Davis, that's what will greet you at its entrance.

It's a huge microsculpture of a cuckoo or emerald wasp, the work of noted British photographer Levon Biss and graces the entrance to Room 1124 of the Academic Surge Building on Crocker Lane.

The 5x6-foot photographic image dwarfs its real-life counterpart, Parnopes grandior, commonly known as the “ruby-tailed wasp,” which measures 1.2 centimeters or about 0.5 inches in length.

Visiting scientists, schoolchildren and the general public who enter the door to Room 1124, Academic Surge Building on Crocker Lane, are marveling at Biss's intricate work, which encompasses more than 8,000 separate images, said Lynn Kimsey, director of the Bohart Museum and professor of entomology at UC Davis.

The ruby-tailed wasp image may rival Dorothy's ruby slippers in the Wizard of Oz. Chrysidid wasps are renowned for their highly sculptured, brilliant metallic colors.

“We chose it partly to honor the work that the museum founder, Richard ‘Doc' Bohart did,” said Kimsey, who was one of his  last graduate students. ”It belongs to the group that he researched. He spent much of his career studying chrysidid wasps or parasitoid wasps.” “It's a European species, found throughout Europe but not here in the United States,” Kimsey related. The wasp, most diverse in arid regions, prefers dry and sandy soils in subtropical and Mediterranean climates.

These wasps, are  "famed for their bright colors," says Biss, who says this particular insect came from France. "Also known as cuckoo wasps, most species are parasites of other solitary wasps or bees. The exoskeleton is heavily sculptured with indentations and extremely tough, providing effective armor against the stings of their hosts."

Members of the Bohart Museum Society funded the wasp image project, part of the museum's major redesign, which includes new signage, graphics and paint in the hallway.

Biss, based in London, works across many genres, including news, sports, portraiture and insects. He developed his interest in insects after his son, Sebastian, found a ground beetle in their backyard. He photographed it and other insects, showed them to the Oxford Museum of Natural History, and gained access to the museum's historical collection of insects, including some collected by Charles Darwin.

Biss now creates micro-scale images for what he calls his Microsculpture series. Over the course of two years, he photographed 37 insects from the Oxford collection. To create the final insect portraits, he composites thousands of images using multiple lighting setups. Biss photographed most of them in about 30 sections, “each section lit differently with strobe lights to accentuate the microsculpture of that particular area of the body.”

The British photographer launched a world gallery tour of his images two years ago; the show is now at the Houston (Texas) Museum of Natural Science, July 13, 2018 through Jan. 13, 2019.

Richard “Doc” Bohart (1913-2007), former professor and chair of the UC Davis Department of Entomology (now the Department of Entomology and Nematology), founded the Bohart Museum of Entomology in 1946. He was an authority on the family Chrysididae, which includes more than 3000 described species. During his 32-year academic career, he identified more than one million insect specimens, many of which are housed in the museum that bears his name. Today the museum, dedicated to teaching, research and public service, houses nearly eight million specimens, collected throughout the world. It also includes a live “petting zoo” of stick insects, Madagascar hissing cockroaches, tarantulas and praying mantids, as well as a year-around gift shop.

The museum is open to the general public Mondays through Thursdays, from 9 a.m. to noon and from 1 to 5 p.m.,   plus occasional, weekend open houses​. The next weekend open house is from 1 to 4 p.m., Sunday, Nov. 18 and centers around urban entomology. 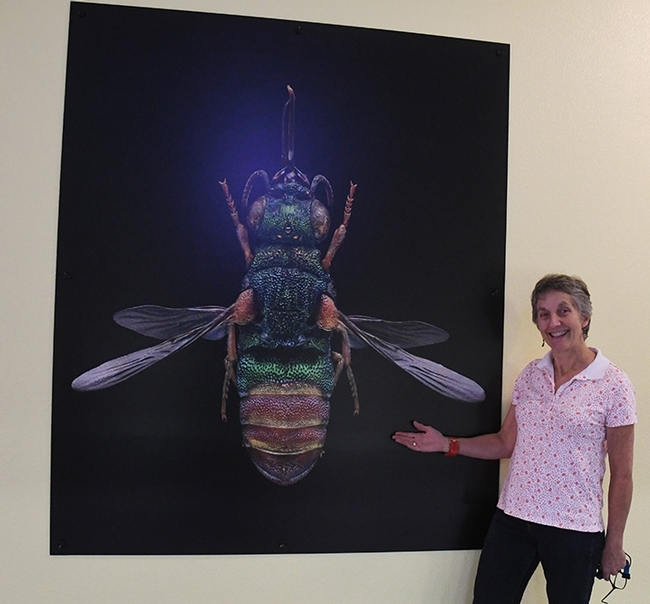