Lark Coffey, an assistant professor in the Department of Pathology, Microbiology and Immunology, UC Davis School of Veterinary Medicine and a member of the Center for Vectorborne Diseases, will speak on "Zika Virus in Macaques, Mice and Mosquitoes: Contrasting Virulence and Transmissibility in Disparate Hosts."

And her host is medical entomologist and seminar coordinator Geoffrey Attardo, assistant professor in the UC Davis Department of Entomology and Nematology. This is part of the department's series of fall seminars.

Coffey says on her website: "Mosquito-borne viruses like Zika, chikungunya, West Nile, St. Louis encephalitis and dengue virus are expanding to cause more human infections worldwide. Unfortunately, no licensed human vaccines for these viruses are available. Management of disease is therefore restricted to palliative care for infected people and minimizing exposure to mosquitoes. Our research focuses on several central themes with a common goal of reducing the burden of disease caused by arboviruses. These include: understanding viral genetic factors that promote arbovirus outbreaks predicting viral mutations that enhance arbovirus transmissibility by mosquitoes and disease in humans or animals increasing safety of candidate live-attenuated vaccines improving arbovirus surveillance in mosquitoes."

Her abstract of her seminar Nov. 7 is technical. "Fetal microcephaly and death are now recognized as severe forms of congenital Zika syndrome; however, it is still unclear whether recent Zika virus (ZIKV) mutations contribute to this phenotype," Coffey says in her abstract. "We identified a single intrahost variant in the ZIKV NS2B protein (NS2BM1404I) from a rhesus macaque (RM) fetus that died after experimental ZIKV inoculation in the first trimester. Targeted deep sequencing flanking NS2B1404 in subsequent cohorts of RM mothers and their fetuses identified NS2BM1404I at minority frequency and sometimes at consensus levels in 3 additional dead or stillborn RM fetuses and/or the plasma of their mothers and in 2 more RM mother and fetus pairs whose fetuses survived to near term or were born alive. In outbred pregnant mice inoculated subcutaneously, we observed that NS2BI1404 engineered into an infectious clone confers fetal infection while ZIKV-NS2BM1404 does not. By examining sequence data from recent epidemics, we found that NS2BM1404I occurs rarely (5/500, 1%) in consensus human ZIKV genomes.

"We also deep sequenced ZIKV genomes from non-pregnant human adults, infants, and Ae. aegypti from the epidemic and observed that NS2BI1404 was more often present at intra-host levels in humans compared to mosquitoes," she continues in her abstract. "Since the primary ZIKV transmission cycle is human-mosquito-human, viral mutations that arise in one host must be maintained in the alternate host to be perpetuated. We therefore hypothesized that ZIKV NS2BM1404Imay not be efficiently transmitted by Aedes aegypti mosquitoes, explaining its low frequency in humans during outbreaks. Using infectious clone-derived ZIKV, we examined vector competence in Ae. aegypti from Puerto Rico. Although infection and dissemination rates were not different, we found that Ae. aegypti did not transmit ZIKV-NS2BI1404 as efficiently compared to ZIKV-NS2BM1404 5 [7/20 (35%) versus 10/20 (50%), p>0.05] and 7 [3/20 (15%) versus 13/20 (65%), P<0.001, Chi-squared] days post-feed. The poor transmissibility of this potentially vertebrate adaptive ZIKV mutation may explain its low frequency in febrile humans. This data highlights the evolutionary complexity during arbovirus transmission cycles and suggests that some pathogenic viral mutations are not likely to spread in epidemics."

Coffey received her bachelor of science degree in biology from the University of the South, Sewanee, Tenn., in 2000, and her doctorate in experimental pathology at the University of Texas Medical Branch, Galveston, Texas in 2005. 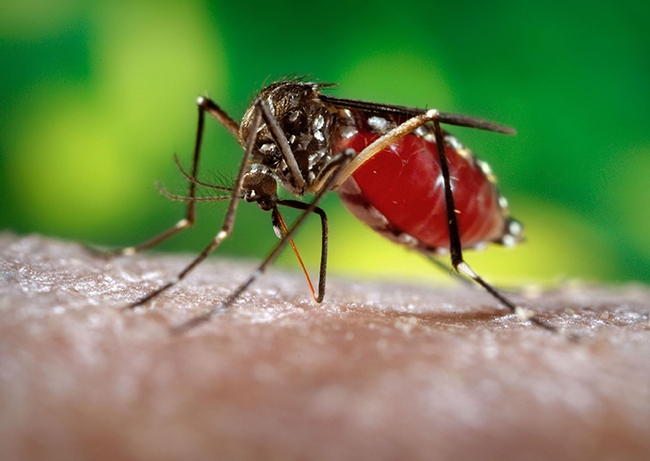