Bug Squad
sitenum=63
Happenings in the insect world
Beer-for-a-Butterfly Contest: We Have a Winner!

And the winner is…drum roll…

Shapiro, who has sponsored the annual contest since 1972 as part of his scientific research to determine the first flight of the cabbage white butterfly, Pieris rapae, netted it--a male--at 1:12 p.m., Friday, Jan. 25 near the Suisun Yacht Club, Solano County.

Shapiro recorded it as the fourth earliest flight of a cabbage white butterfly in Suisun in 47 seasons.

The professor provides a pitcher of beer or its equivalent to the person who collects the first cabbage white butterfly of the year in the three-county area of Sacramento, Solano and Yolo.

He will have to drink his own beer.

“I was two days behind to do Suisun, due to various commitments on campus,” Shapiro related. “I kept Friday open because I had the overwhelming feeling yesterday that the first flight of Pieris rapae was due.”

So on the train ride to Suisun, he took a net with him. “That was silly insofar as rapae always starts later at Suisun than in, say, West Sacramento, so the odds of seeing the first one of 2019 there were minuscule,” Shapiro commented. “In fact, if I recall correctly, the first of the year was only recorded at Suisun once, Jan. 31, 2011. But I went prepared, if I saw one."

Shapiro described the day as “the warmest Jan. 25 at Suisun since the Medieval Warm Period: 68F, wind E-5 mph, clear.” His notes read: “Very little in bloom: many dandelions, one Eucalyptus, three Hirschfeldia (mustard), two Raphanus (radish), many Malva (mallow) and a few Picris (sunflower family). Site still 30 percent flooded. I went to all the usual Vanessa (butterfly) places and found nothing. I searched more than 100 Malva plants for larvae and found nothing.”

“But near the Suisun Yacht Club (703 Civic Center Blvd., Suisun City) at 1:12 p.m. I saw a rapae. It didn't land and I had to take it in the air. It's a small and very heavily infuscated male.” It had just eclosed that day, he said.

Shapiro placed it in a glassine envelope and returned to Storer Hall, home of the Department of Evolution and Ecology,- where administrative staff “certified that it was alive and kicking.”

It was the only butterfly Shapiro saw in Suisun during the two-plus hours of record warmth. “I said rapae is usually later at Suisun than elsewhere near sea level. The year 2011 was the exception. It was out at Suisun on Jan. 31 but at Gates Canyon (Vacaville) not until Feb. 7; West Sacramento, Feb. 6; North Sacramento, Feb. 13; and Rancho Cordova, Feb. 23.”

However, something just as exciting awaited him when he returned to the Davis train station. When he exited the parking lot at 3:06 p.m., a “painted lady, Vanessa cardui, an immigrant from the desert, flew right in front of me in migratory mode. It was unambiguously old, worn, and ‘desertic,'not locally bred. That was more of a surprise than the rapae! In 47 years of data, I have two earlier cardui records—Jan. 18, 1987 and Jan. 23, 2014 and one tie, Jan. 25, 2009.”

“If anybody sees more, let me know,” he said. “This could be the start of something big...”

Since 1972, the first flight of the cabbage white butterfly has varied from Jan. 1 to Feb. 22, averaging about Jan. 20. In 2018, Shapiro collected the winner at 11:23 a.m. Friday, Jan. 19 in one of his frequented sites—a mustard patch by railroad tracks in West Sacramento, Yolo County.

Shapiro, who maintains a research website at http://butterfly.ucdavis.edu, usually wins his own contest. He has been defeated only four times, and all by UC Davis graduate students.

Shapiro has monitored butterfly population trends on a transect across central California for 47 years and records the information on his research website.  His 10 sites stretch from the Sacramento River Delta through the Sacramento Valley and Sierra Nevada mountains to the high desert of the Western Great Basin. He visits his sites every two weeks "to record what's out" from spring to fall. The largest and oldest database in North America, it was recently cited by British conservation biologist Chris Thomas in a worldwide study of insect biomass.

Shapiro, a member of the UC Davis faculty since 1971 and author of the book, Field Guide to Butterflies of the San Francisco Bay Area and Sacramento Valley Regions, has studied a total of 163 species of butterflies in his transect. 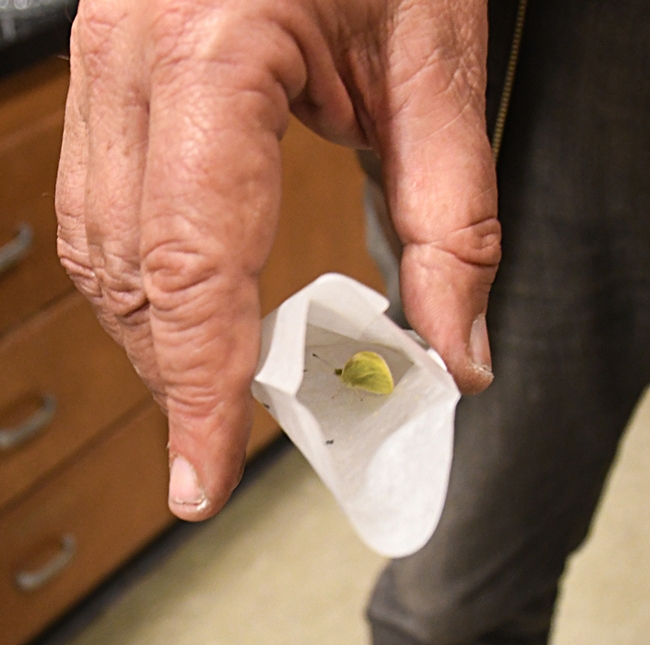 Inside this glassine envelope is the first-of-the-year cabbage white butterfly, ready to fly. It's a male collected in Suisun City.(Photo by Kathy Keatley Garvey) 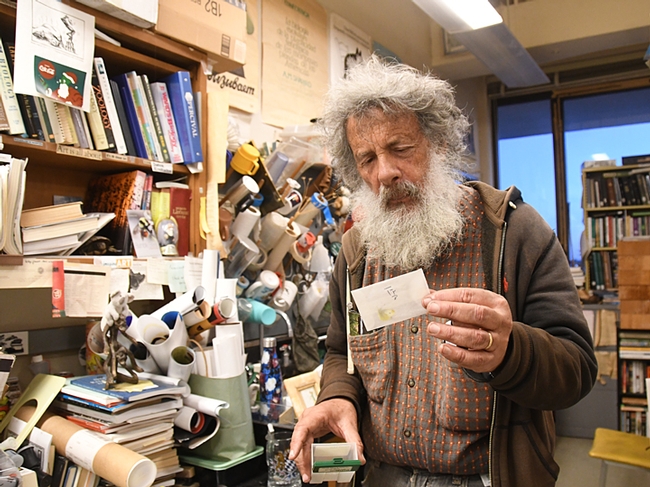 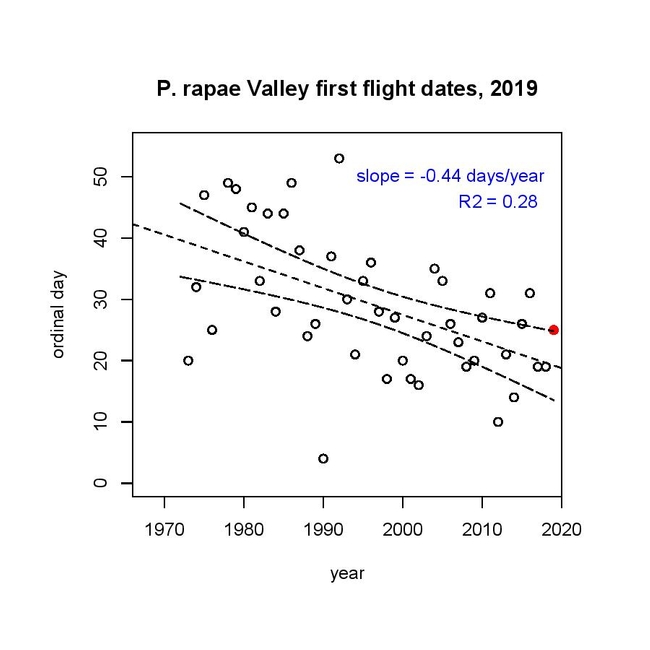