Female red rock skimmer, Paltothemis lineatipes. (Photo by Kathy Keatley Garvey)
If a dragonfly lands on your window screen and rests there for several hours, is that good luck?

A female red rock skimmer,  Paltothemis lineatipes, did just that.

She was several feet from our fish pond and several yards from our pollinator garden. And inches from where we stood.

This dragonfly is a species of skimmers in the family Libelluidae, the fame family as those red flame skimmers Libellula saturata. Want to learn more about dragonflies? Check out the Bohart Museum of Entomology at UC Davis. It's located in Room 1124 of the Academic Surge Building on Crocker Lane. Dragonflies are not only represented among the insect museum's nearly eight million global insect specimens, but in jewelry, books and on a poster in the gift shop, "Dragonflies of California," the work of Kareofelas and Fran Keller, then a graduate student in entomology at UC Davis and now an assistant professor at Folsom Lake College.

Some folks think dragonflies yield special powers. "In almost every part of the world, the Dragonfly symbolizes change, transformation, adaptability, and self-realization," says one website. "The Dragonfly has been a symbol of happiness, new beginnings and change for many centuries.  The Dragonfly means hope, change, and love."

When it landed on our window screen in the early morning, it brought one thing: joy.

"Look!  A dragonfly on the screen! Cool! Never seen one there before." 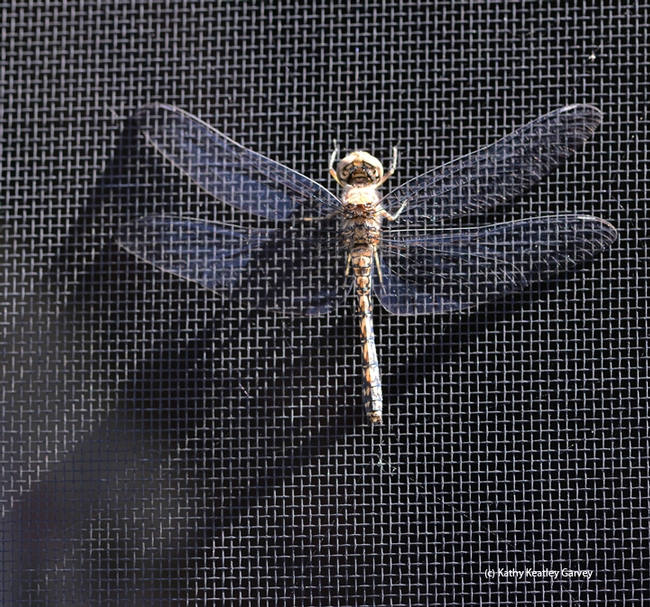