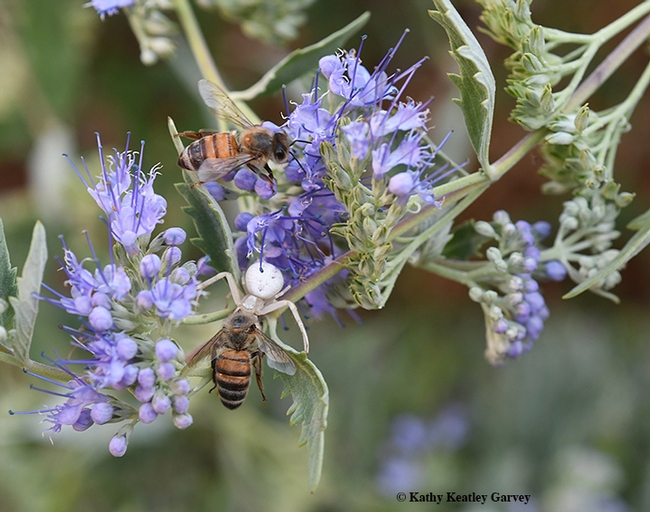 A crab spider nails a honey bee while another honey bee watches. This image, on bluebeard, Caryopteris x clandonensis, was taken in Vacaville, Calif. (Photo by Kathy Keatley Garvey)
Focus Areas:
Focus Area Tags: Agriculture, Economic Development, Environment, Innovation, Natural Resources, Pest Management, Yard & Garden
Tags: Brian Johnson (20), honey bee scientist (2), honey bees (358), James Nieh (3), predators and prey (1), Rachel Vannette (17), UC Davis Department of Entoomlogy and Nematology (1), UC San Diego (3)
Comments: 1
Comments:
by S. Snow
on September 18, 2019 at 10:41 AM
Thank you for posting that beautiful image in the bluebeard.
The pollinator populations as well as that of their predators are all remarkably high this year in my Davis yard. Partly because of last season's heavy rains and the resulting reinvigorated food supplies and partly because of the maturation of a pollinator garden.
I discovered a gravid female mantid noshing on a honey bee last week, then a few minutes later found her beginning to feed on what looked like a black and white Phidippus spp. “jumping spider,” with the bee's abdomen still in her clutches. Maybe she was saving it as dessert! I'm glad to share the photo.
Leave a Reply: