At a recent public meeting held in Contra Costa County by UC Cooperative Extension, a female cattle rancher representing a family that has owned land in the Sacramento-San Joaquin Delta for generations dumped out a grocery bag with dozens of envelopes onto the table in front of her.

“This is the amount of mail I get in one week from agency people," she said, her voice trembling with anger. "They want to come onto my land and look at where they want to put big tubes to carry water down south. My family has been on this property for a long time. It’s my family’s land.”

For this woman and many others, UCCE directors in the five Delta counties opened the flood gates when they invited the public to share their feelings about water. Ten meetings were hosted to give ordinary citizens a chance to speak.

“There is a lot of frustration in the Delta region,” said Carole Paterson, director of UC Cooperative Extension in Solano County. “People felt their voices weren’t being heard.”

Paterson and county directors in Yolo, Sacramento, San Joaquin and Contra Costa counties held community conversations in local libraries and invited the public to have their say. The participants’ thoughts will be synthesized in a written report and some of their comments - videotaped during the sessions - will be part of an audio-visual presentation.

A few common themes emerged from a preliminary review of the 10 conversations, Paterson said.

Education. People do not understand what is happening to their water. The issues are extremely complex and over the years, layer upon layer of legislation, lawsuits, court decisions and media reports have muddied the water.

Science. People are concerned that science is being manipulated by various stakeholders to support a particular point of view.

The reports on the water conversations will be shared with county boards of supervisors, farm bureaus, legislators, agencies and individuals involved in the state’s water policy.

The Delta faces a host of problems, including invasive species, water degradation due to urban and agricultural runoff, aging infrastructure and the threat of flooding should the sea level rise due to climate change.

“We weren’t looking for solutions,” Paterson said. “We just wanted to give citizens a chance to share their experiences." 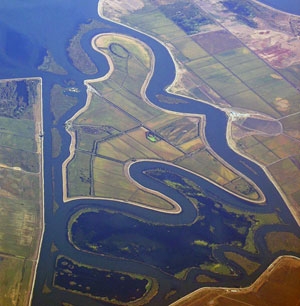