sarahdalrympleforweb
Diane Ullman, Donna Billick and Sarah Dalrymple (Sarah is shown at right) are used to thinking outside the box.

Now they are thinking inside and outside the hive.

“They’re fantastic,” said bee breeder-geneticist Susan Cobey. “They’re beyond fantastic—the art work is awesome. Not only is the quality of artwork highly impressive, the coverage and accuracy of the honey bee life cycle and activities depicted are extremely well done.”

Cobey is right. They are amazingly bee-utiful.

The colorfully painted bee hives are the work of the UC Davis Art/Science Fusion Program, co-founded and co-directed by Ullman and Billick. Ullman is an entomology professor and associate dean for undergraduate academic programs at the College of Agricultural and Environmental Sciences, and Billick is a noted artist who holds a bachelor’s degree in genetics and a master’s degree in fine arts.

Dalrymple, a UC Davis entomology graduate student, served as the teachers’ assistant for the program’s Graphics and Communications Studio section.

As part of their research, the students enrolled in the class visited the Laidlaw facility, learning about bees from Cobey and staff research associate-beekeeper Elizabeth Frost.

“From my view, watching this come together has been a highlight, as the students asked their numerous questions seeking accuracy and sought the experience of opening a colony and observing  bees in their numerous duties,” Cobey said. “The delight and amazement  of students  holding a frame of brood, watching a new bee emerge from her cell,  feed larvae or pack in pollen for first time, is also is a thrill for me.”

Each sculpture is stacked with seven real bee hives, so real that curious Laidlaw bees try to enter them.  One column depicts life inside the hive, and the other column, life outside the hive. Among the images: a queen bee laying eggs, nurse maids caring for the brood, and foragers collecting nectar, pollen, propolis and water.

The half-acre bee friendly garden, open year around at no charge, includes a 6-foot-long honey bee, created by Billick and funded by Wells Fargo. It's a worker bee appropriately placed beneath an almond tree.

Ceramic tiles on the bench below the bee were created by undergraduate students in a freshmen seminar for Davis Honors Challenge students; community members; and sixth grade students at Korematsu Elementary School, Davis.

Lynn Kimsey, director of the Bohart Museum of Entomology and former chair of the UC Davis Department of Entomology, once said that the honey bee haven is sure to become "a campus destination."

(See this web page for more information on the grand opening.) 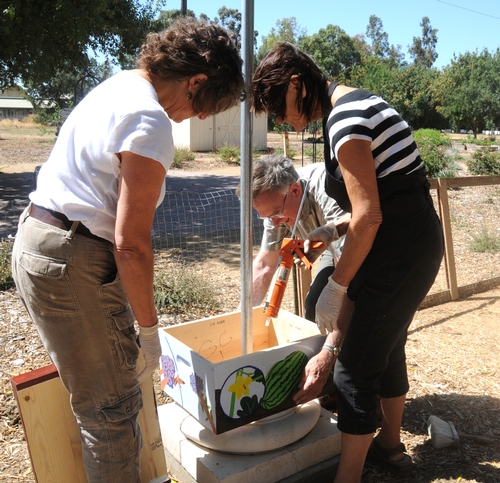 Intricate Work
THE TWO BEEHIVE columns installed at the Haagen-Dazs Honey Bee Haven involved intricate work. Here Diane Ullman, Eric Mussen and Donna Billick adjust the structure. Ullman and Billick are the co-founders and co-directors of the UC Davis Art/Science Fusion Program that created the art for the haven. Mussen is an Extension apiculturist and a member of the UC Davis Department of Entomology faculty. (Photo by Kathy Keatley Garvey) 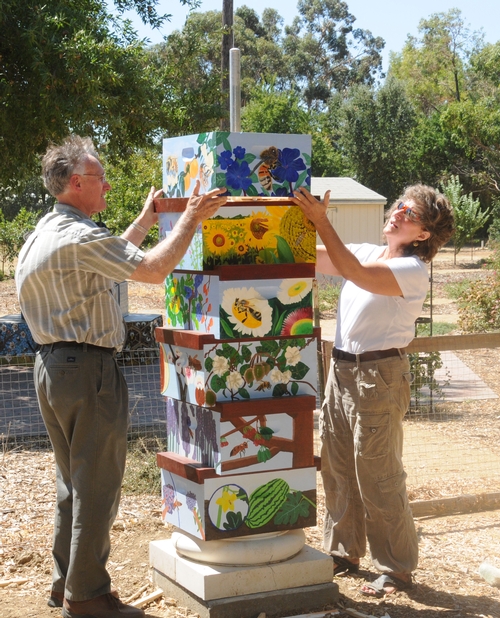 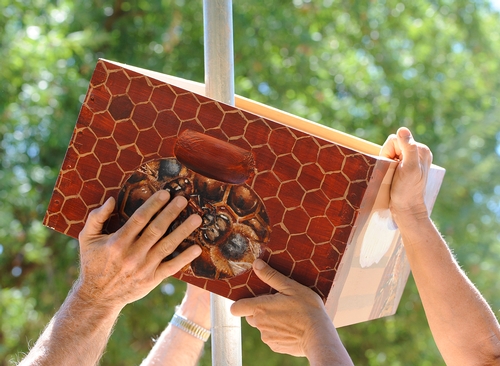