beesuitforweb
Many beekeepers keep bees, but Norman Gary wears them.

Gary, who received his doctorate in entomology (apiculture) from Cornell University, served as a professor at the University of California, Davis for 32 years, retiring in 1994.

Now 76, he's been a beekeeper for 62 years and a researcher for more than three decades. He’s published more 100 peer-reviewed scientific papers and four book chapters.

His research on honey bees is well known. Among his accomplishments: he invented a magnetic retrieval capture/recapture system for studying the foraging activities of bees, documenting the distribution and flight range in the field.

He's also well known as a "bee wrangler"--he trains bees to perform action scenes in movies, television shows and commercials. His credits over the last 35 years include 18 films, including “Fried Green Tomatoes”; more than 70 television shows, including the Johnny Carson and Jay Leno shows; six commercials, and hundreds of live Thriller Bee Shows in the Western states.

Gary will appear Thursday, Sept. 16 on a History Channel show wearing 75,000 bees. The show, part of Stan Lee’s “Super Humans,” is scheduled to be broadcast at 10 p.m., Pacific Time (Channel 64 for local Comcast viewers in the Davis area).

A crew from England filmed Gary in mid-May at the Harry H. Laidlaw Jr. Honey Bee Research Facility at UC Davis; at Rick Schubert’s Bee Happy Apiaries in Vacaville-Winters; and then in a UC Davis open field where the 75,000 bees clustered his entire body.

“That’s about 20 pounds, depending upon how much honey or sugar syrup they have consumed,” Gary said.  “A hungry bee weighs approximately 90 mg and within a minute of active ingestion she can increase her weight to 150 mgs!”

“Bees are not inclined to sting if they are well fed—happy and content—and are ‘under the influence’ of powerful synthetic queen bee odors—pheromones—which tend to pacify them,” Gary said.

Bees are attracted to pheromones and they cluster on drops of pheromones he places on himself.  While at UC Davis, he formulated a pheromone solution that is very effective in controlling bee behavior.

Gary (check out his website) once trained bees to fly into his mouth to collect food from a small sponge saturated with his patented artificial nectar.  He holds the Guinness World record (109 bees inside his closed mouth for 10 seconds) for the stunt.

His book for beginning beekeepers, “The Honey Bee Hobbyist,” is to be published in early December by Bow Tie Press.

Don't be too surprised if he also writes one on bee wrangling.

The next generation can learn a lot from him. 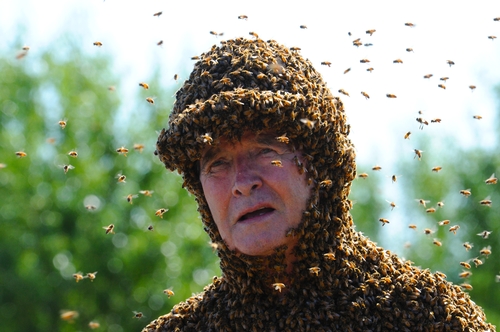 Bee Man Norman Gary
BEE MAN Norman Gary, emeritus professor, University of California, Davis, is covered with bees during a shoot for the History Channel. The segment, for Stan Lee’s “Super Humans,” is scheduled to be broadcast at 10 p.m., Pacific Time. (Photo by Kathy Keatley Garvey) 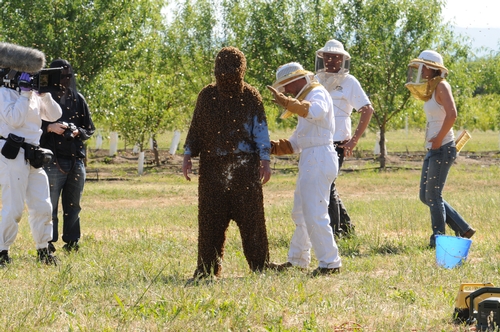 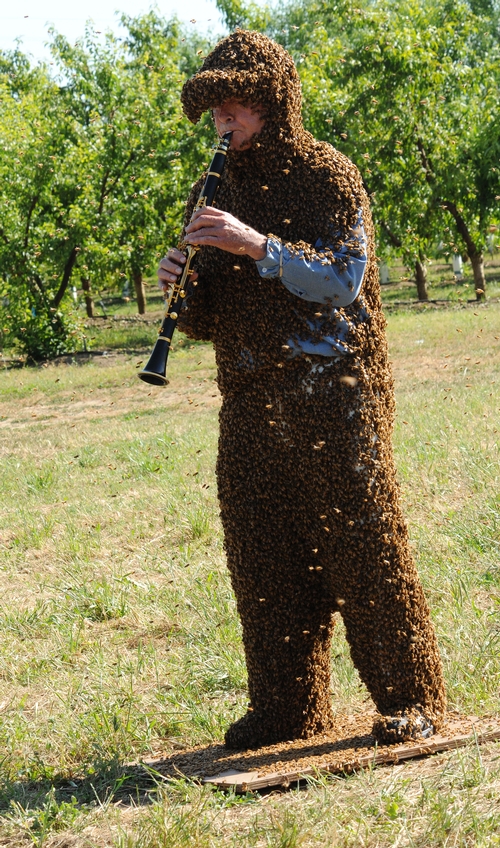