Four baby Pacific fishers were released in the forest this week, with the aid of UC Berkeley scientists who are studying the Sierra Nevada population of the rare weasel-like carnivore.

Pacific fishers were once an abundant species, but the population has been in decline for more than 20 years. As part of the Sierra Nevada Adaptive Management Project (SNAMP), an ongoing study aims to determine what factors are influencing the fishers' fate, such as habitat loss, timber harvest, disease, development and climate change.

"We are extremely excited that the four fisher kits have been repatriated back out in the forest, where we hope they will survive and become part of the fisher population in this area," said Rick Sweitzer, UC Berkeley Research Wildlife Biologist and Adjunct Associate Professor.

Last May, two fishers being monitored as part of the SNAMP study were killed – one by a bobcat, the other hit by a car on Highway 41. It just so happened they were both nursing mothers.

“We knew that the female fishers had kits, and that these animals are rare in California,” Sweitzer said. “We couldn’t in good conscience let the baby animals perish in their den cavities knowing we might be able to intervene.”

The scientists staged two daring rescues and spirited the babies to the Fresno Chaffee Zoo for care. In time, the young animals were moved to a large pen and taught to hunt live prey by a regional wildlife rehabilitation organization.  The young fisher kits have been under the care of the Fresno Chaffee Zoo, by agreement with the California Department of Fish and Game.  Last week, the Department of Fish and Game gave approval for the "juvenile" fishers to be released back out into the forest.

"We aided this process by finding the most appropriate release areas where the animals will be most likely to find food in good quality fisher habitat," said Sweitzer.

Two of the fisher kits were released in the west Kaiser area. Two others were returned to the Beasore Road/Chilkoot Lake area of the Sierra National Forest, close to where their mother was killed in the SNAMP study area.

Unusual circumstances precipitated the two fishers' release into an area where their population is being researched. Late last year, two fishers died during captures when they were given anesthetic agents from a particular production lot that, unbeknownst to the scientists, had been causing serious problems with domestic pets and other animals and were subsequently recalled, but not until after both fisher deaths had occurred.  With permission from the California Department of Fish and Game, two of the fisher kits replaced the two that died because of the research project. 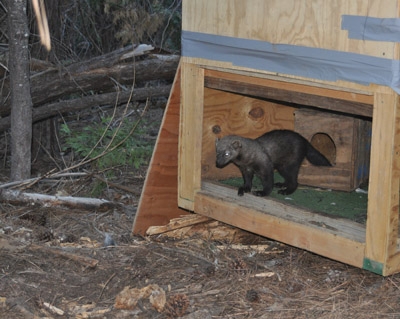 A young Pacific fisher steps out into wildnerness.
Tags: endangered species (5), Rick Sweitzer (1), Sierra Nevada Adaptive Management Project (12), wildlife (24)
Comments: 1
Comments:
by Tanala Turner
on March 17, 2015 at 2:34 PM
I really want to see this plan go through. I hope they can get the fisher cats back on track.
Leave a Reply: