beetowardnectarine
Some folks have the best of both worlds.

Cobey, affiliated with the Harry H. Laidlaw Jr. Honey Bee Research Facility at the University of California, Davis,  since 2007 and as a bee research collaborator at Washington State University since 2007, now has a dual appointment: UC Davis and WSU.

She is dividing her time 50-50 between the two universities.

Honey bee research is the winner.

Cobey will continue her work on enhancing domestic honey bee breeding stock and improving colony health. Her WSU appointment is based in western Washington at the Mt. Vernon Research Station.

“The overall goal is to improve colony health to supply the critical and demanding need for pollination of the nation’s agricultural crops,” she said.

Cobey will continue teaching her spring classes at UC Davis on queen bee rearing and instrument insemination.  Her classes draw students from throughout the world.

“A major focus of my dual appointment is to expand the collaborative effort to enhance our domestic honey bee breeding stocks through the incorporation of germplasm collected from bees around the world,” Cobey said. “Genetic diversity is critical to maintain healthy honey bee populations.”

European colonists brought the honey bee (Apis mellifera) to what is now the United States in the 1600s. “Importation was banned in 1922 to avoid the tracheal mite,” Cobey related. “To avoid the introduction of tracheal mites, a small founder bee population was established before the  importation ban in 1922. This small subset of a few subspecies from limited importations represents a genetic bottleneck. This is an increasing concern with the continuing high losses of colonies due to parasitic mites, the plague of new pathogens  and the phenomena of colony collapse disorder.”

Cobey collaborates with apiculturist Steve Sheppard, professor and chair of the WSU Department of Entomology, in an ongoing honey bee stock improvement project between the two universities.

WSU holds the APHIS-USDA (Animal and Plant Health Inspection Service) quarantine in an ecological reserve isolated by a sea of wheat. “This is where we are introducing, observing and testing the colonies resulting from the semen importations,” Cobey said. “We have brought in Apis mellifera carnica stock from Germany, Apis mellifera ligustica from Italy, and most recently Apis mellifera caucasica from the Republic of Georgia.” Carniolans and Caucasians are dark races of bees. The Italian bee (Apis mellifera liguistica) is the  most prevalent bee in the United States.

This effort also includes research into developing protocols for the safe importation of germplasm and the development of cryopreservation techniques for long term storage.

The dual appointment basically means two springs. "I can enjoy the early spring season in California and then head north to follow the season in Washington state," she said. "Queen rearing in California usually can be started in late February.  By June, the summer heat  and dearth make this more difficult, especially in maintaining a large pool of drones for mating.  Spring in Washington kicks in by May, so this is prime queen-rearing season in the Pacific Northwest.”

Working in both California and the Pacific Northwest will allow the evaluation and selection of stocks in different climates. “This will also provide reservoirs of stock in different places  to spread the risk of losing valuable lines.” 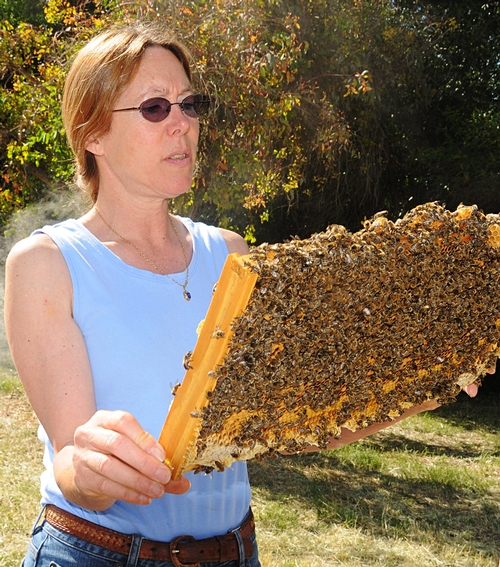