"He is slim and intense, with graying hair and clipped sentences jagged with inflections from his years in Brazil and Japan. And he does not, perhaps cannot, quit."

So wrote freelance journalist Carrie Peyton Dahlberg, formerly with the Sacramento Bee, in her excellent profile of chemical ecologist Walter Leal, published today on the American Association for the Advancement of Science website.

Leal, professor of entomology at the University of California, Davis, "tries to understand at the molecular level exactly what an insect is smelling, and how it relies on scent to interact with the world," she wrote.

Her article included a great quote from Leal's colleague, John Hildebrand, a neurobiology professor at the University of Arizona, Tucson.

“He’s one of the most dynamic people in the field. He’s a remarkably energetic and passionate person about his work … and notorious almost for the rapid fire way he speaks. He loves to joke that he can say twice as much in a lecture as anyone else because he only says half of each word.”

It was the Leal lab that discovered the secret mode of DEET. The groundbreaking research proved that “DEET doesn’t mask the smell of the host or jam the insect’s senses," Leal said in a UC Davis Department of Entomology news story. "Mosquitoes don’t like it because it smells bad to them.”

DEET’s mode of action or how it works puzzled scientists for more than 50 years.  The chemical insect repellent, developed by scientists at the U.S. Department of Agriculture and patented by the U.S. Army in 1946, is considered the "gold standard" of insect repellents worldwide. Worldwide, more than 200 million use DEET to ward off vectorborne diseases.

Scientists long surmised, incorrectly, that DEET masks the smell of the host, or jams or corrupts the insect’s senses, interfering with its ability to locate a host. Mosquitoes and other blood-feeding insects find their hosts by body heat, skin odors, carbon dioxide (breath), or visual stimuli. Females need a blood meal to develop their eggs.

In her article, Peyton Dahlberg said Leal is trying to find something better than DEET.

Wrote Peyton Dahlberg: "DEET is a flawed tool, a chemical that needs to be used at high doses, can affect human biology, and isn’t recommended for very young infants, according to Leal and others who have studied it. The point is finding something better than DEET, something more targeted to the most problematic insects and less dangerous for everything else, including people."

Leal told her that that to search for safer alternatives to DEET and other insecticides, researchers need to better understand the mechanisms of scent detection and chemical communication.

Leal indeed has a "nose for insects' sense of smell," as the AAAS headline pointed out. 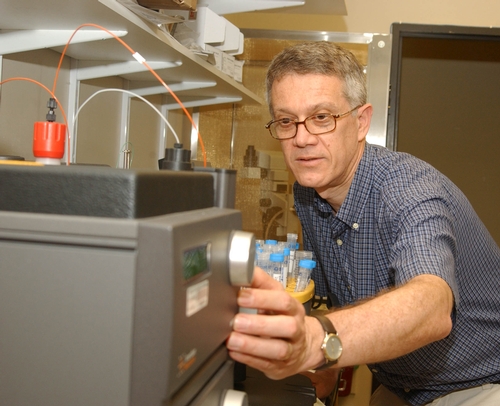