By Penny Pawl, U. C. Master Gardener of Napa County

One of spring's miracles is about to occur. The California Pipevine Swallowtail butterflies will start emerging from their pupas and gather around California pipevine plants to create a new generation sometime in March.

Last March, temperatures were low. The butterflies did not appear until April. I feared they would be deformed but all were perfect.

The Pipevine Swallowtail is the one floating around dressed in blue and black. It is about the size of a Monarch. The females do not have the blue lower wing.

To attract this particular butterfly, you need to grow California pipevine (Aristolochia californica). This plant is the only food that Pipevine Swallowtail larva or caterpillars (also known as cats) eat before they go into the pupa. The pipevine plant contains acids that taste bad to other creatures and may even poison them. This feature improves the chances that the cats will make the transition to butterflies.

California pipevine grows in Napa County along creeks and river ways under trees. It even crawls up trees. It is called pipevine because the flowers, which start to bloom in February, are shaped like a Dutchman's pipe with stripes on their sides. I know there is a good plot of these at the Martha Walker Garden in Napa's Skyline Park. John Hoffman, a now-deceased Master Gardener, supplied the vines.

Pipevine flowers are fertilized by gnats. One day, out of curiosity, I opened a flower to see if anything was inside. There was a gnat flying around. A few months after the flowering, a seed pod forms. The cats love the taste of those.

I have gathered pipevine seed on occasion but have had no luck getting the seed to germinate. If you leave the seed pod to ripen on the vine, it will attract yellow jackets so I remove any pods I find.

On the other hand, pipevine will easily reproduce from a cutting. The cutting should be as long as possible—three to four feet. Coil it up and bury it one to two inches deep in potting soil in a container. Keep it watered and you will eventually have another pipevine, although it takes a while to get to the size that attracts butterflies. Mine required two summers of growing before any butterflies appeared, and even then, there weren't many.

I water my pipevine all summer and it continues to grow. All summer long I see the butterflies fluttering along the fence the vine is planted on. Checking the underside of the leaves and the newer stems I find eggs in groups of eight to ten. I collect some of them and raise them indoors.   Others I leave on the vine and I see the beautiful cats all summer. The cats do have some predators, but because of the toxins they have consumed, birds leave them alone.

It takes a lot of pipevine meals before these cats go into the pupa stage. When I move the group into the house to raise them, I know I have made a five-week commitment to feeding and cleaning their enclosures daily. Then they go walkies (as I call it) and make the pupa.

More about walkies: all the cats I have raised, of every type, do the walkies before they settle down and make the pupa. They are releasing liquids and finding the perfect spot to make their pupa. It is amazing how far they will crawl. Occasionally a butterfly emerges in my house from under the table or another place, because the cats have escaped and walked to a hidden spot.

The pupa is made by shedding their outer skin. Moths weave a cocoon web around themselves. Once they become a pupa, the waiting game begins.

Some will emerge from their pupa in a month and go on to lay more eggs. Others will take almost a year to transition. Sadly, like all butterflies, they have a short life—only about six weeks.

To learn more and enjoy more about pipevine swallowtail, visit these websites:

The UC Master Gardeners of Napa County are volunteers who provide UC research-based information on home gardening and answer your questions. To find out more about upcoming programs or to ask a garden question, visit the Master Gardener website (http://napamg.ucanr.edu) or call (707) 253-4221 between 9 a.m. and noon on Mondays, Wednesdays or Fridays. 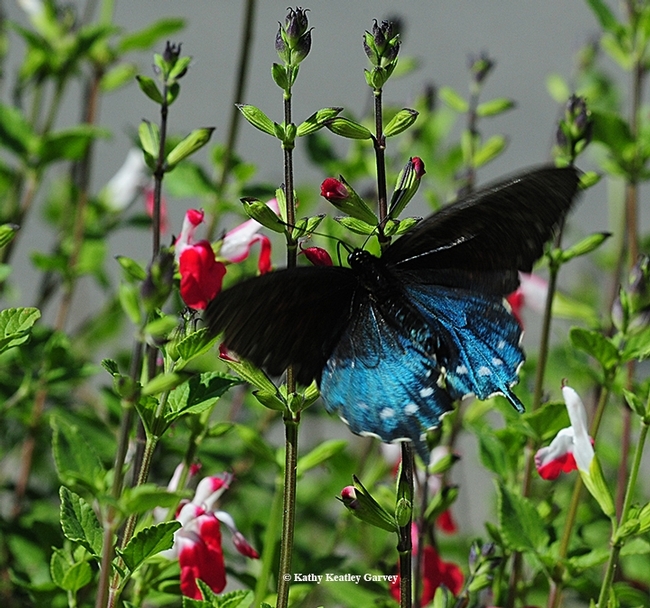