Lynn Kimsey, director of the Bohart Museum of Entomology, UC Davis, shows a queen Asian giant hornet, one of 20 in the Bohart's global collection. The largest in the collection, it is about an inch and a half long, she said.
The news stories and social media comments about the Asian giant hornet detected last year in British Columbia and Washington state and labeled “the murder hornet,” are drawing the ire of entomologists throughout the world.

And well they should.

UC Davis wasp expert and researcher Lynn Kimsey, director of the Bohart Museum of Entomology and professor of entomology, UC Davis Department of Entomology and Nematology, called the name "ridiculous" and said "it's no more likely to sting and kill a human than a honey bee." (See Bug Squad blog)

Kimsey, a two-term past president of the International Society of Hymenopterists, told us yesterday that “Actually it's less likely, as honey bee venom packs quite a punch and it is exclusively designed to defend against vertebrates."

A colony of the Asian giant hornet (AGH), Vespa mandarinia, was found and destroyed Sept. 18, 2019 in Nanaimo, Vancouver Island, and the single dead hornet was found Dec. 8, 2019 in Blaine.

These were the first detections of this species in North America, and no, the so-called "murder hornets" are not out to get us. They're not out to kill you. They're not taking over the world.  (Expect some upcoming horror movies, though!)

Twenty Asian giant hornet (AGH) specimens are housed in the Bohart Museum of Entomology, home of a global collection of nearly 8 million species. The largest AGH, a queen, measures about an inch and a half long, Kimsey said. She's never seen any larger than that.

Meanwhile, entomologists are bemoaning the name, "murder hornet" and the sensationalism and fear-mongering ensuing. Apparently the name originated with a Japanese researcher; out of the translation came "murder hornet."

“It's a bloody dumpster fire,” said entomology advocate, traveler and photographer Stephane De Greef, administrator of a newly created Facebook page, “Is This a Murder Hornet?”

“One colony was found and exterminated in Nanaimo on Vancouver Island in September of 2019, with a few sightings associated,” Yanega wrote. “One wasp believed to be from that colony was found--dead--on the U.S. side of the border near Nanaimo in December. Right now, all the authorities are doing is asking people to keep their eyes peeled JUST IN CASE there were queens that escaped the destruction of the Nanaimo nest, and established their own nests nearby. I was one of the authorities brought in to consult on this case, and to my knowledge there have not been any sightings in 2020 that would suggest the eradication attempt was unsuccessful. Put bluntly, as far as we know, there are no Asian giant hornets alive in either the U.S. or Canada as of 2020, and if there are, then they would be in the immediate vicinity of Vancouver Island (about a 50 mile radius or so).”

Want to know more about them? Read the fact sheet published by Washington State University Extension. It's the work of the husband-wife team of Susan Cobey, bee breeder-geneticist and Timothy Lawrence, county director of Island County Extension (both formerly of UC Davis), and also Mike Jensen, county director of Pend Oreille. (See https://bit.ly/2SA3TxS)

The sensationalism on the media is a concern, said Lawrence, "but...we need to find out just how extensive this infestation is."

Facebook users are posting images of so-called Asian giant hornets that are actually such species as cicada killers, European hornets, southern yellow jacket queens, sawflies, hoverflies, a beetle, and even a moth.

“Yes, it is possible this species could establish,” wrote Sloan Tomlinson, a parasitoid wasp specialist and educator. “Has it yet? No. Until concrete evidence is presented about any further establishment by this species, it's simply conjecture. Additionally, even IF this species is established, their infamy is overhyped and sensationalized. In Japan they do indeed kill around 30 people a year. Around 40 people are killed annually in the US by domestic dogs.”

Doctoral candidate and researcher Ellie Field of Iowa State University wrote on Facebook that “the murder hornet articles are making the rounds quickly and they seem to be doing more harm than good. Yes, it is awesome to track insect populations (particularly staying watchful for non-native and potentially invasive species). But no, the Asian giant hornet (Vespa mandarinia) is not going to destroy America. The one nest and individual that was found around Vancouver last year was destroyed, and this doesn't indicate any establishment. Introduction events happen all the time, all across the world! That region should continue to keep a watchful eye, but for everyone else this is not going to be relevant. There is no invasion, just a small possibility that some may have overwintered in that area.”

Those unsure about insect identification can email an image to Lynn Kimsey at lskimsey@ucdavis.edu or contact the Entomological Society of America at https://www.entsoc.org/ or https://bit.ly/2W2jRmi.

Meanwhile, they're trying to douse the "bloody dumpster fires." 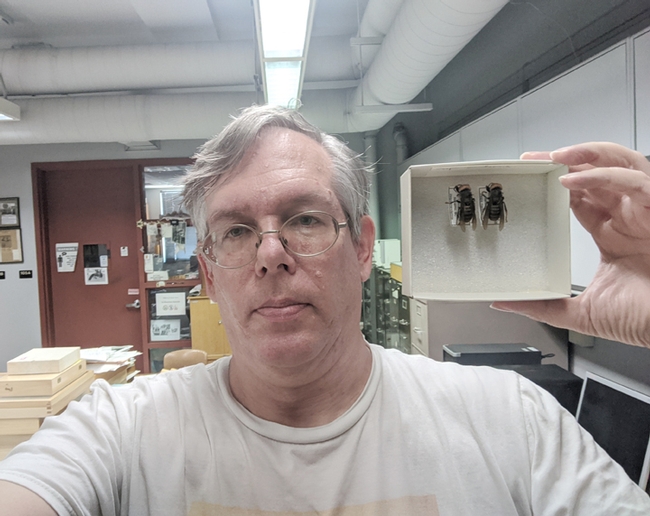 Entomologist Doug Yanega of UC Riverside shows two Asian giant hornets, one of which is from the colony detected and killed on Vancouver Island, British Columbia. He was sought out to identify the species. 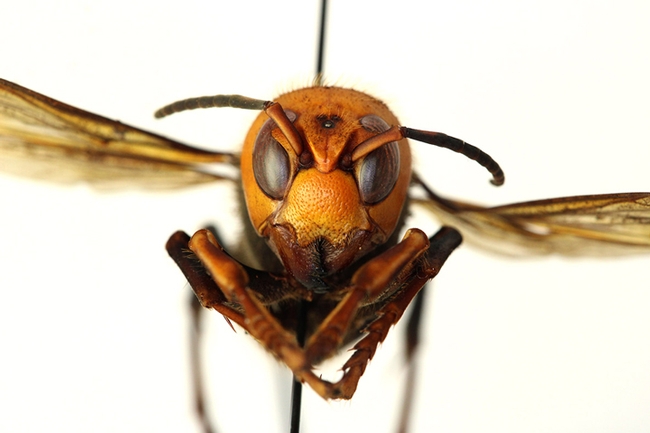