Bug Squad
sitenum=63
Happenings in the insect world
A Damsel, But Not in Distress

It's a damsel, but not in distress.

It's a Familiar Bluett, but it's not all that familiar--unless you study Odonata.

Lately we've been seeing scores of damseflies zigzagging in our pollinator garden in Vacaville, Calif. Seven showed up at one time on our soon-to-bloom Mexican sunflower (genus Tithonia). They found some prey and decided to stay...for awhile.

Greg Karofelas, an associate at the Bohart Museum of Entomology, UC Davis, identified the damselflies as the Familiar Bluett, (Enallagma civile), family Coenagrionidae. They are native to much of the United States and southern Canada.

"The name fits time of the year, and locality, males are light blue, females dark," Karofelas commented. "Enallagma is a genus with a bunch of very similar looking damselflies--they can be hard to identify, even under 10X magnification, in hand."

Wikipedia describes damselflies as "an ancient group," insects that have existed since at least the lower Permian. "All damselflies are predatory; both nymphs and adults eat other insects. The nymphs are aquatic, with different species living in a variety of freshwater habitats including acid bogs, ponds, lakes and rivers."

Watch for them! They're the insect version of the flying needles, and their fabric is our landscapes. 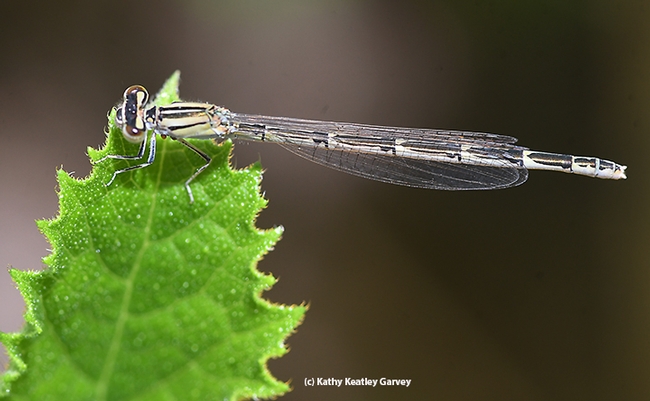 A female damselfly, identified as a familiar bluet, Enallagma civile, rests on a Tithonia leaf in Vacaville, Calif. (Photo by Kathy Keatley Garvey) 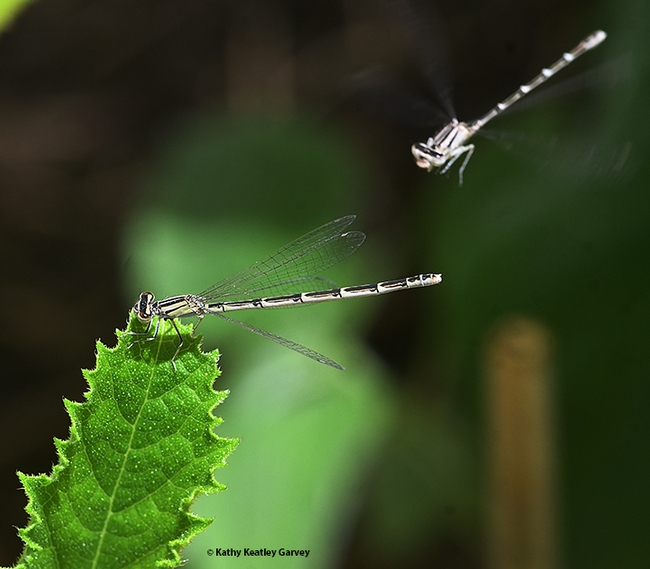