Emily Bick, who received her doctorate in entomology from UC Davis in 2019, is now a postdoctoral researcher at the University of Copenhagen, Denmark
If that heavy growth of water hyacinth in the Sacramento-San Joaquin Delta in central California alarms you, then you'll want to read a newly published research paper that provides the most thorough look at how salinity impacts the invasive plant and its biological control agent, the weevil Neochetina bruchi.

“The water hyacinth, Eichhornia crassipes, is considered the world's most economically damaging aquatic weed,” said author Emily Bick, a UC Davis alumnus and a postdoctoral scholar at the University of Copenhagen, Denmark.

All-Hands-on-Deck
The paper, titled “Effects of Salinity and Nutrients on Water Hyacinth and its Biological Control Agent, Neochetina bruchi,  “was truly an all-hands-on-deck effort,” Bick said. "Specifically, a major project hurdle was the temperature in Davis."

She related that the greenhouse experiments on water hyacinth “weren't producing consistent results due to the high variation—and high heat--in water temperature.”   So fellow scientists  Danny Klittich, then a UC Davis doctoral student in entomology with the Michael Parrella laboratory, and Bob Starnes, then UC Davis senior superintendent of agriculture,  built a giant water bath out of a leftover evaporative cooler from the Michael Parrella lab.

The Abstract
“Water hyacinth, Eichhornia crassipes (Mart.) Solms (Commelinales: Pontederiaceae), is an important aquatic weed worldwide. Previous studies demonstrate that releases of Neochetina bruchi Hustache (Coleoptera: Curculionidae) provide biological control in many locations, but not all. Notably, N. bruchi were unsuccessful at regulating water hyacinth in tidal brackish waters. Abiotic factors, including salinity and nutrients, affect water hyacinth growth, but little is known about the impact of salinity on weevil survival. We hypothesized that N. bruchi has a relatively low salinity tolerance. In a mesocosm experiment, we assessed weed growth in response to a range of salinity and nutrient concentrations. In a laboratory, we assessed adult N. bruchi mortality in response to various salinity concentrations. Results indicate that increasing nutrient concentration increases weed growth. When both nutrient and salinity levels were varied, nutrients increased leaf count, but not biomass, while salinity reduced growth and increased mortality. Increasing salinity concentrations increased adult weevil mortality; required concentrations were higher than that for weeds. Thus, these results did not provide support for the suggested hypothesis. Potential effects of salinity via other exposures to weevils need to be investigated. Elucidating abiotic factors important for weed growth and weevil survival may increase effectiveness of water hyacinth management practices.” 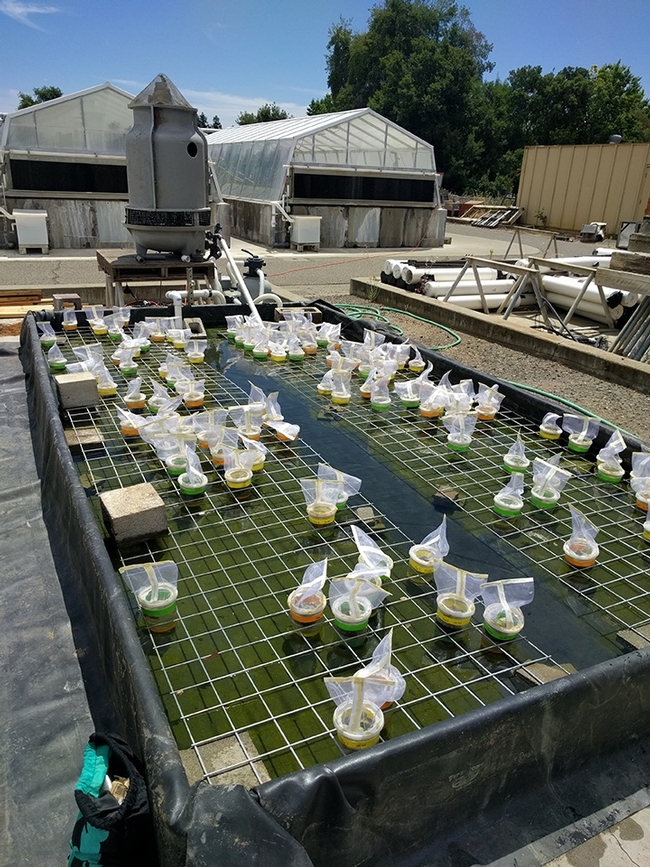 This is the giant water bath created from a leftover evaporative cooler from the Michael Parrella lab. 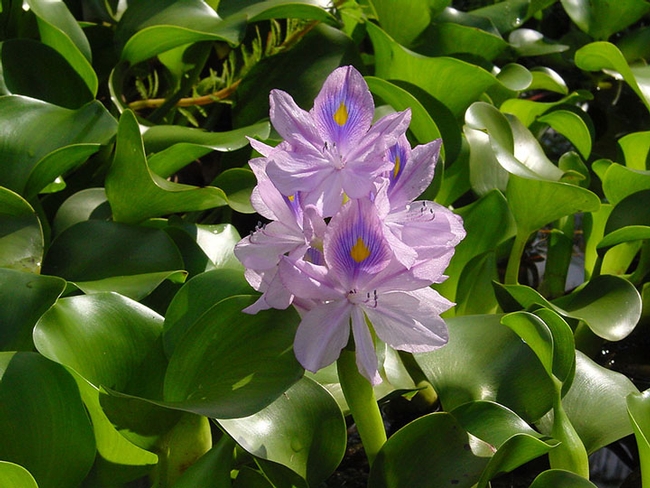