Soil health has been described as the ability of soil to function and is characterized by biological, chemical, and physical soil properties that are sensitive to changes in management. Studies have shown that reducing tillage, increasing rotational crop diversity, and employing cover crops during the fallow season can improve soil health characteristics. In turn, improvements in soil health may enhance various soil functions, like improving crop productivity, reducing input costs, and buffering plant health from living and non-living stresses.

Over the last year and a half, I have been working on a project to characterize a suite of soil health properties in alfalfa receiving full and deficit irrigation. When I was developing the project, I had two hunches. The first was that alfalfa production may improve certain soil health characteristics. Alfalfa provides soil coverage for several years. Alfalfa is also a deep-rooted crop that can scavenge water and nutrients deep in the soil profile. Additionally, alfalfa has been shown to provide a nitrogen benefit to subsequent crops. For reasons like these, I hypothesized that certain soil health characteristics might improve over the years of an alfalfa stand.

My second hunch, however, was that deficit irrigation could negatively impact soil health properties. In recent years, California alfalfa production has received negative press for water usage that exceeds that of other crops. Alfalfa does represent an important footprint in California's agricultural water use. Alfalfa has a high water demand (i.e. crop evapotranspiration, ETc) that is directly related to yield. All else being equal, as ETc increases, alfalfa yield also increases up to maximum ETc. Studies conducted by UC Alfalfa and Forage Specialist, Dan Putnam, have demonstrated, however, that alfalfa is resilient under water deficit conditions. While alfalfa may be resilient under deficit irrigation, water facilitates soil microbe functioning and nutrient availability. Therefore, I also hypothesize that soil health may degrade under deficit irrigation. This is critical knowledge to develop not only for deficit irrigation strategies but also in the event of drought, where growers may be asked to sacrifice crop irrigation for water transfers to other uses. Such knowledge could demonstrate how prioritization of water uses may impact soil conservation outcomes.

This project is being conducted at UC Davis on a Yolo silt loam and was initiated in Spring 2019. The treatments, which are replicated four times, are: 1) full irrigation (100 percent ETc), 2) full irrigation at the beginning of the season with a sudden cutoff toward the end of the season (60 percent ETc), 3) gradual deficit where each irrigation imposes restriction (60 percent ETc), and 4) more-severe gradual deficit (40 percent ETc). The treatments are applied using overhead irrigation – an 8000 series Valley 500 feet, four span linear-move system. The site allows us to observe soil characteristics under different levels of deficit, imposed at different stages of the cropping season. Soil sampling occurs twice each year – in the spring before irrigation begins and in the fall after the last irrigation. We are testing a comprehensive nutrient analysis, organic matter, total carbon and nitrogen, salinity, compaction, bulk density, N mineralization, and particulate organic carbon.

This project is ongoing, but we have interesting preliminary results. One example is with particulate organic carbon. Particulate organic carbon (POC) is a biological indicator of soil health because it is the fraction of soil organic matter that is readily available as an energy source for soil microorganisms. Though not statistically significant (Fig. 1, P = 0.066), there is a trend for the higher irrigation rates – and sustained irrigation throughout the season – to have higher POC. Between the two irrigation treatments providing approximately 60 percent of ETc, the third treatment which provides a sustained deficit throughout the season tends to have higher POC than the 60 percent ETc treatment that has a sudden cut-off of water about two-thirds of the way through the season. These results suggest the importance of water in sustaining soil biological activity.

Likewise, there is a similar trend for higher irrigation rates and sustained irrigation through the season to result in lower soil compaction readings (Fig. 2, P = 0.2691). At the 6-inch depth, the full irrigation rate trended toward having the lowest compaction, followed by the 60 percent sustained deficit treatment. All treatments, however, had average readings below 300 psi, which is the pressure above which root growth is believed to be constrained.

These are preliminary results. We will soil sample again this fall, and hopefully again next spring and fall, to see if these trends continue. I want to acknowledge my UC Davis collaborators on this project: Dan Putnam, Isaya Kisekka, Daniel Geisseler, Umair Gull, and Veronica Romero. I also want to acknowledge the South Delta Water Agency for funding support. 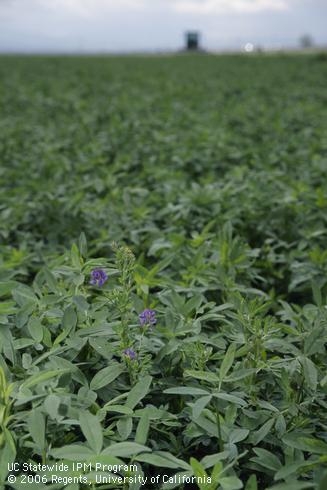