Unlike the Saints, the ants won't "go marching in"; they'll be "marching on."

The "Ants Go Marching On” will set the theme for the Bohart Museum of Entomology's open house from 1 to 4 p.m., Sunday, March 13 at 1124 Academic Surge, California Drive, UC Davis campus.

There you can learn about ants from myrmecologists--those are the folks who study ants.

The Bohart is home to more than seven million insects.

“The Hymenoptera (bees, ants and wasps) form about 30 percent of the Bohart collection,” said Tabatha Yang, education and outreach coordinator.

The Bohart Museum also has a live “petting zoo” that includes Madagascar hissing cockroaches and walking sticks; and a gift shop where visitors can purchase such items as t-shirts, sweat shirts, posters, jewelry and insect candy.

The R. M. Bohart Museum of Entomology, directed by Lynn Kimsey, professor of entomology at UC Davis, was founded in 1946 by noted entomologist Richard M. Bohart. Dedicated to teaching, research and service, it houses the seventh largest insect collection in North America.

The museum holds specimens collected worldwide and is the home of the California Insect Survey, a storehouse of the insect biodiversity of California’s deserts, mountains, coast and great central valley.

The museum’s regular hours are from 8:30 a.m. to noon and from 1 to 5 p.m., Monday through Thursday.  It is closed on Fridays and on major holidays. More information is available on the Bohart website or by contacting Tabatha Yang at tabyang@ucdavis.edu or (530) 752-9464. Due to limited space, group tours will not be booked during the weekend hours. 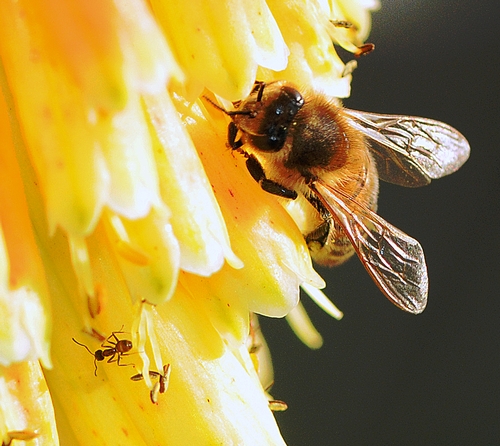 Kissin' Cousins?
ARGENTINE ANT (Linepithema humile) and honey bee (Apis mellifera) share a flower in the Storer Garden at UC Davis. They both are members of the order, Hymenoptera, which includes bees, ants and wasps. (Photo by Kathy Keatley Garvey) 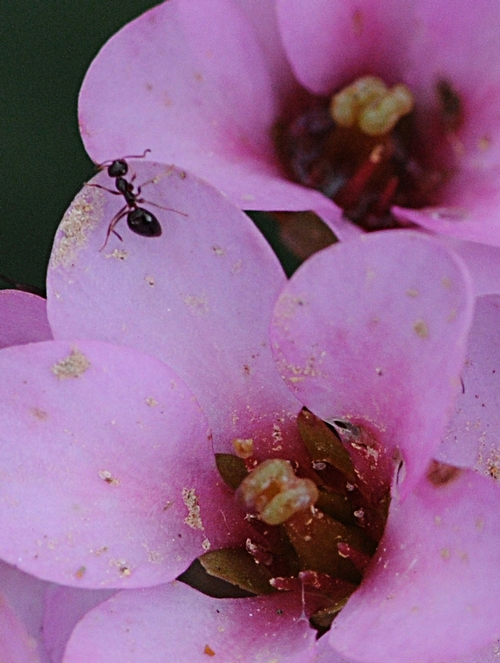