Amy Toth of Iowa State University researches wasps.
What a delight to see that European paper wasp nest tucked beneath the overhang of a fence in a Vacaville, Calif. neighborhood.

My first thought was "Wow! Haven't seen a Polistes dominula nest for years!" (The last one I saw was hanging out on the lip of a trash can in a UC Davis parking lot; it vanished the next day.)

And the second thought: #wasplove," a hashtag coined on Twitter by Amy Toth of Iowa State University.

Back in May of 2015, Toth, now an associate professor in the Department of Ecology, Evolution and Organismal Biology and the Department of Entomology, delivered a presentation on wasps at a seminar hosted by the University of California, Davis. As her website indicates, she's interested in the mechanisms and evolution of insect sociality, using paper wasps and honey bees as model systems. Current research projects involve de novo sequencing of paper wasp genomes and transcriptomes, comparative genomic analysis of Hymenoptera, genomic and epigenetic mechanisms regulating caste evolution, and the influences of nutrition and viruses on honey bee behavior and health.

Toth holds a doctorate from the University of Illinois at Urbana–Champaign, where she studied with Gene Robinson, and also did postdoctoral work with Christina Grozinger at Pennsylvania State University.​

Wasps are pollinators and they attack pests of agricultural crops, Toth told the Department of Entomology and Nematology at her seminar.

However, many folks we know just aren't fond of wasps. They're unwelcome guests in their yard, patio or picnic. See the information on "Yellowjackets and Other Social Wasps" on the UC Statewide Integrated Pest Management Program website, which includes "Preferring to live in or near orchards or vineyards, they (paper wasps) hang their paper nests in protected areas, such as under eaves, in attics, or under tree branches or vines. Each nest hangs like an open umbrella from a pedicel (stalk) and has open cells that can be seen from beneath the nest. Sometimes white, legless, grublike larvae can be seen from below. Paper wasp nests rarely exceed the size of an outstretched hand, and populations vary between 15 to 200 individuals. Most species are relatively unaggressive, but they can be a problem when they nest over doorways or in other areas of human activity such as fruit trees."

We remember asking Toth to list what she loves about wasps.

Here's her list, as posted earlier on a Bug Squad blog:

And my No. 10: they are quite photogenic. 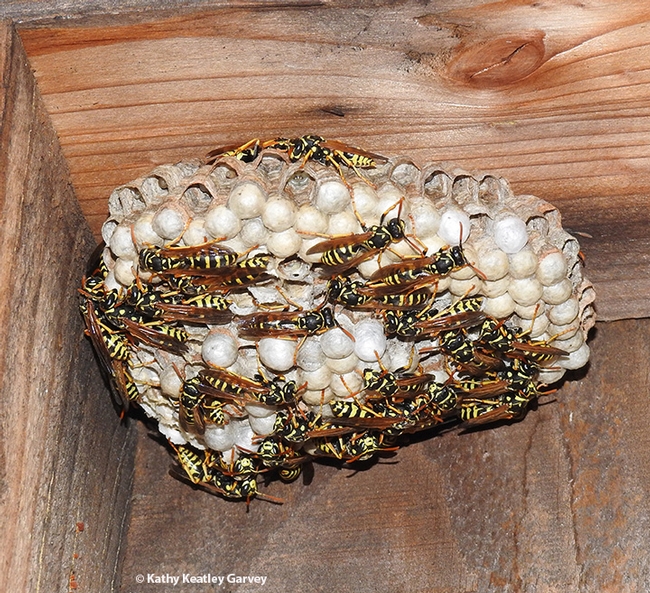 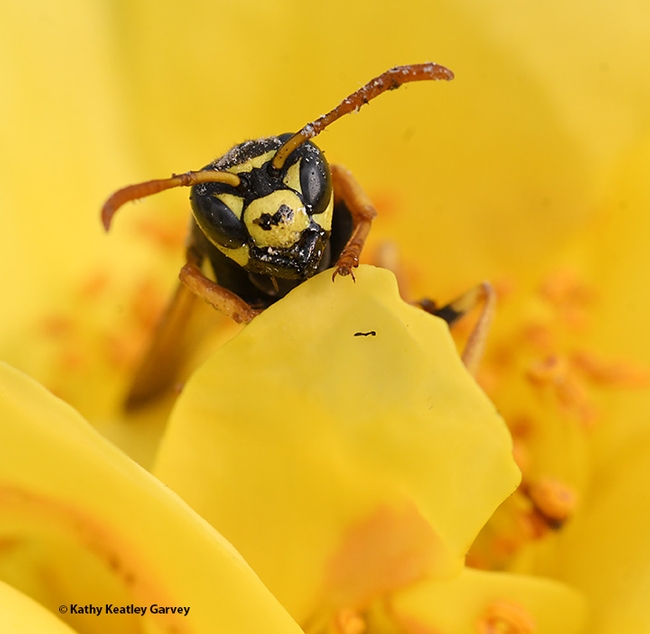