I see garden escapees whenever I go for a walk: canna lilies at Quarry Park, Mexican Feather Grass infiltrating coastal bluffs, and Agapanthus above Montara beach. When such escapees are not native to the area but are able to survive and reproduce on their own, they are considered naturalized. Many of these plants do not cause significant problems. Many introduced plants, however, do cause harm, and these are generally referred to as invasives. Once naturalized, they can become threats to agriculture, human health, and the local ecology. One of our responsibilities as gardeners is to make sure we don't let invasives out of our garden. Safer still, don't have them in the first place.

Nearly forty percent of invasive plants in California were introduced accidentally as seeds, often via clothing, equipment, soil, animals, and packing materials. The majority, however, were intentionally introduced as ornamentals, animal forage, soil stabilizers, and various other human uses. It is still pretty easy to unknowingly buy invasive species from garden centers. A UC Master Gardeners research project several years ago found approximately 265 California nurseries offering invasive plants for sale, so unless gardeners have done a bit of research, they may not know some of the offered plants are threats to our coastal natural areas.

UC Master Gardeners who design and work in gardens along the coast advised against the following popular and widely available plants that are escaping and outcompeting our native species:

There are many other ornamentals to look out for. Do some quick checks before you add a new one to your garden. Is it on a California invasives list (such as Cal-IPC)? If so, there might be a better alternative (plantright.org). Read the nursery or grower's information on the plant container. If it says the plant "reseeds happily," or "establishes itself quickly," or "spreads easily," take a second look. Happy gardening!

Cynthia Nations, a UC Master Gardener, works daily on succulents and edibles in her El Granada garden and home-schools her grandchildren. Susan Kornfeld gardens professionally in San Mateo County. She is a UC Master Gardener and can be found at the Plant Clinic at the San Mateo Arboretum the first Sunday of most months. 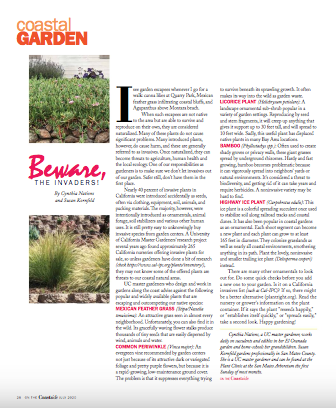