Hymenopterist Lynn Kimsey of the Bohart Museum of Entomology, UC Davis, is a noted expert on wasps. This is a specimen from the Bohart.
California this year has faced the COVID-19 pandemic, disastrous wildfires, racial unrest, and political strife--a combination resulting in undue stress and overall fatigue.

Should we now worry about those Asian giant hornets becoming residents of our Golden State?

Kimsey, a global authority on wasps, bees and other insects, is a two-term past president of the International Society of Hymenopterists. She recently co-authored “The Diversity of Hornets in the Genus Vespa (Hymenoptera: Vespidae; Vespinae); Their Importance and Interceptions in the United States” in the journal Insect Systematics and Diversity with two other entomologists: lead author Allan Smith-Pardo, U.S. Department of Agriculture Animal and Plant Health Inspection Service (APHIS); and  James Carpenter of the American Museum of Natural History's Division of Invertebrate Zoology.

The latest news: the Washington State Department of Agriculture (WSDA) announced Oct. 24 that a nest was discovered and destroyed in a tree cavity near Blaine, Wash. This marked Washington's first known nest of Vespa mandarinia. North America's first detected colony of the giant hornets was destroyed in September 2019 on Vancouver Island, British Columbia. A single V. mandarinia was found dead in Blaine, Wash., in December 2019.

But to worry. The hornet won't like California's hot, dry summers and lack of rainfall.

As Kimsey told reporter Kellie Hwang of the San Francisco Chronicle: "It is exceedingly unlikely that these hornets can establish in California. If you look at where they're found in their native range in southern Asia, this region has summer rain. I think California is too dry, except perhaps along the far northern coast.”

Washington State University (WSU) entomologists and their colleagues agree. They recently  "examined more than 200 records from the hornet's native range in Japan, South Korea, and Taiwan, then used a set of ecological models incorporating climate data to predict likely global habitat across six continents," according to a WSU news release.

They found that "Asian giant hornets are most likely to thrive in places with warm summers, mild winters, and high rainfall. Extreme heat is lethal, so their most suitable habitats are in regions with a maximum temperature of 102 degrees Fahrenheit. Based on those factors, suitable habitat for the giant hornet exists along much of the U.S. west and east coasts, adjacent parts of Canada, much of Europe, northwestern and southeastern South America, central Africa, eastern Australia, and most parts of New Zealand."

"Much of the interior of the U.S. is inhospitable to the hornet due to extremes of heat, cold, and low rainfall," the news release related. "This includes the eastern parts of Washington state and British Columbia, as well as California's Central Valley, all of which have major fruit and nut crops that rely on honey bee pollination."

Scientists dislike the sensationalized name "murder hornets" (so named because insects can quickly destroy a honey bee colony). The insects defend their colony when it is threatened, but generally will not attack people or pets, according to WSDA. The fear is there, though. "Their stinger is longer than that of a honeybee and their venom is more toxic," WSDA says. "They can also sting repeatedly."

Maybe we should just call them "giant hornets," you think? 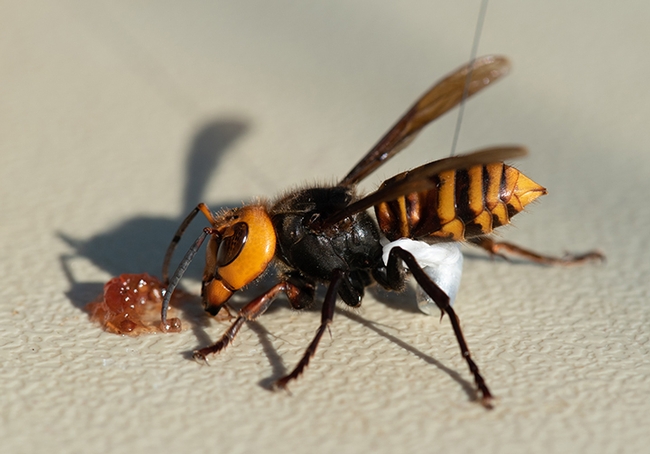 The Asian giant hornet measures a little less than two inches long. A nest was recently discovered and destroyed near Blaine, Wash. (Photo courtesy of the Washington Department of Agriculture) 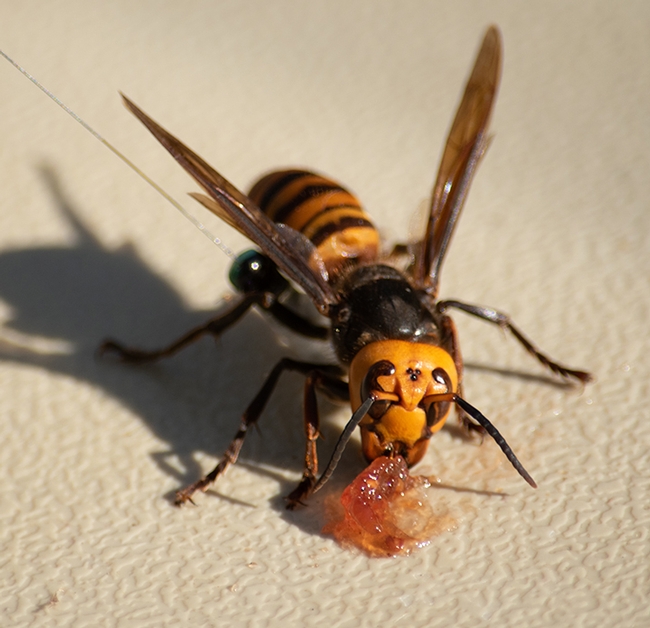