Apis mellifera scutellata, a honey bee subspecies from southern and eastern Africa, “first made the news in 1957 when swarms escaped from an experimental breeding program in Brazil,” said population biologist Erin Calfee, lead author of “Selection and Hybridization Shaped the Rapid Spread of African Honey Bee Ancestry in the Americas,”  published in PLOS Genetics.

The invasive bees expanded their range 300 to 500 kilometers a year, breeding with the European honey bees (Apis mellifera), also non-natives, and arriving in southern California in 1994.

“If we want to understand what makes a very fit honey bee, we should study scutellata-European hybrid honey bees, because in less than 50 years they've outcompeted other honey bees across most of the Americas,” said Calfee, who studies with major professor Graham Coop and collaborator Santiago Ramirez, both of the Department of Evolution and Ecology. The trio collaborated with  María Alejandra Palacio and Marcelo Agra from the National Institute of Agricultural Technology (INTA) in Balcarce, Argentina.

“Compared to European-adapted honey bees, African bees preferentially forage for pollen (vs. nectar) and store little honey for winter,” said Calfee. “Foraging behavior is one of many traits that distinguish African and European honey bees and may contribute to a natural climatic range limit for Africanized honey bees, which spread rapidly out of Brazil in the 1950s and today dominate across tropical (but not temperate) regions in the Americas.”

“We find that natural selection has favored African scutellata ancestry at some of the same regions of the genome in both North and South America,” said Calfee. “This beneficial genetic variation from A. m. scutellata could be used to breed more resilient honey bees, for example with higher Varroa mitetolerance. In contrast, it doesn't look like the European ancestry was that important to the invasion's success.”

Despite their rapid move from Brazil, “today African mitochondria and traits are not widely observed in Northern California or, at their southern limit, in southern Argentina, despite having plenty of time for the invasion to reach these latitudes,” Calfee said. “Before this study no one had done a thorough genomic study of the outcome of this invasion in either North or South America, and the expected range limit and impact of scutellata ancestry on U.S. agriculture was especially uncertain.”

"This study provides the first detailed analysis of how scutellata ancestry varies with climatic variable, and therefore, future breeding studies can use the existing genetic variation along these clines to breed bees optimized for different climates,” Ramirez said.

“Scutellata-European honey bees have a number of desirable traits for bee breeding in light of current honey bee declines, including higher overall genetic diversity and resilience to Varroa mites and toxins,” the UC Davis doctoral student said. “But they are also known for being much more defensive than most European honey bees.” European colonists brought Apis mellifera to what is now the United States in 1662. “It would be great to combine our data with more behavioral mapping studies to see if we can uncover which traits are driving the selection patterns we see in the genome,” Calfee commented “For example, scutellata-European hybrid honey bees defend their colonies from Varroa mite infection by removing infected brood and biting or ‘grooming' Varroa mitesoff of adult bees. These traits are potentially really important in the wild because Varroa mites are a common problem contributing to honey bee declines. But most genetic mapping studies have been done in European bees, so we currently don't know which regions of the genome underlie these beneficial behaviors in scutellata-European hybrid honey bees.”

Scutellata-European hybrid honey bees are known for their defensive behaviors. In comparison with European honey bees, they  defend their colonies in greater numbers, stinging predators and pursuing intruders at greater distances. That defense behavior resulted in news media sensationalizing them as "killer bees." Calfee said she was never stung. “That's mostly because bees sting only to defend their colonies, not when out foraging on flowers.” Calfee collected freely foraging honey bees. “We did find some feral nests in utility poles and trees in Argentina,” she said, “and we sampled bees from the entrances, but thankfully, we didn't disturb any of these colonies enough to elicit a defense response.” Just by looking at them, you cannot tell if a honey bee has African scutellata ancestry, Erin Calfee says. “There are subtle differences in body size--scutellata are slightly smaller and have shorter wings--but there's also a lot of variation between individual bees. (Photo by Kathy Keatley Garvey)
She sampled in California from San Diego County up toMonterey County (~ElCajon to Salinas). In Argentina she sampled with Marcelo Agra from Northern Argentina (Reconquista, Santa Fe Province) to Buenos Aires Province. "In both cases we netted hundreds of bees across transects that are hundreds of miles long (~400 miles in California ~550 miles in Argentina north to south)."


Just by looking at them, you cannot tell if a honey bee has African scutellata ancestry, she said. “There are subtle differences in body size--scutellata are slightly smaller and have shorter wings--but there's also a lot of variation between individual bees. So we didn't actually know what percent scutellata ancestry our samples had until we got the sequencing results back. It was pretty exciting to see such a beautiful cline in ancestry in the data!”

“What made scutellata-European hybrid bees such a successful genetic mixture, and also, what's stopped them from getting all the way to Canada? A lot of work has already been done on these bees and why they might be more fit than European honey bees, especially in the tropics. For example, we know that they are adapted to warmer climates, have higher resilience against Varroa mites and pesticides and overall much higher genetic diversity. What's really useful about taking a population genetics approach is that the most important selection pressures will naturally leave the largest detectable genomic signatures.”

“I also wanted to compare the genetic outcomes between the bees that spread north to California and those that spread south to Argentina. Because these bee populations split early in the invasion out of Brazil, they give us two sources of information about the range limits and which genetic regions are important to the incredible success of the invasion. It's a unique opportunity to have large-scale natural replication like this.”

In their collaboration with the Argentina scientists, they sought to compare the outcomes of the invasions in California to South America. “We only had a rough idea of where the hybrid zones were from previous studies based on mitochondria surveys or just a few bees,” Calfee related. “So we sampled very long transects, hundreds of kilometers, in both California and Argentina, netting individual bees.”

“Luckily for us, the hybrid zones ended up being very wide and hard to miss! We sequenced the genomes of hundreds of bees across these transects and determined how the proportions of scutellata vs. Europeanancestry changes with latitude. Because these hybrid bees are recent genetic mixtures of African A. m. scutellata and European bee subspecies, we were able to infer the patchwork of scutellata vs. European ancestry across their genomes and look for regions of the genome with an overabundance of one ancestry, a sign that natural selection has favored that ancestry.”

The project was funded in part by the Pollinator Partnership and North American Pollinator Protection Campaign. The study took several years, from planning to publication, but the all the sampling was done in 2018.

Recent biological invasions offer ‘natural' laboratories to understand the genetics and ecology of adaptation, hybridization, and range limits. One of the most impressive and well-documented biological invasions of the 20th century began in 1957 when Apis mellifera scutellata honey bees swarmed out of managed experimental colonies in Brazil. This newly-imported subspecies, native to southern and eastern Africa, both hybridized with and out-competed previously-introduced European honey bee subspecies. Populations of scutellata-European hybrid honey bees rapidly expanded and spread across much of the Americas in less than 50 years. We use broad geographic sampling and whole genome sequencing of over 300 bees to map the distribution of scutellata ancestry where the northern and southern invasions have presently stalled, forming replicated hybrid zones with European bee populations in California and Argentina. California is much farther from Brazil, yet these hybrid zones occur at very similar latitudes, consistent with the invasion having reached a climate barrier. At these range limits, we observe genome-wide clines for scutellata ancestry, and parallel clines for wing length that span hundreds of kilometers, supporting a smooth transition from climates favoring scutellata-European hybrid bees to climates where they cannot survive winter. We find no large effect loci maintaining exceptionally steep ancestry transitions. Instead, we find most individual loci have concordant ancestry clines across South America, with a build-up of somewhat steeper clines in regions of the genome with low recombination rates, consistent with many loci of small effect contributing to climate-associated fitness trade-offs. Additionally, we find no substantial reductions in genetic diversity associated with rapid expansions nor complete dropout of scutellata ancestry at any individual loci on either continent, which suggests that the competitive fitness advantage of scutellata ancestry at lower latitudes has a polygenic basis and that scutellata-European hybrid bees maintained large population sizes during their invasion. To test for parallel selection across continents, we develop a null model that accounts for drift in ancestry frequencies during the rapid expansion. We identify several peaks within a larger genomic region where selection has pushed scutellata ancestry to high frequency hundreds of kilometers past the present cline centers in both North and South America and that may underlie high-fitness traits driving the invasion. 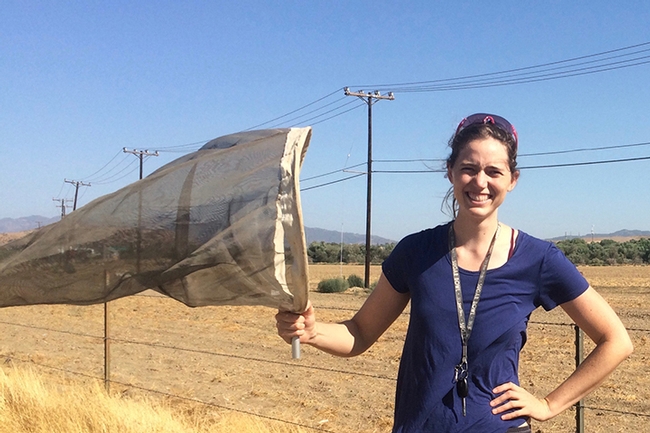 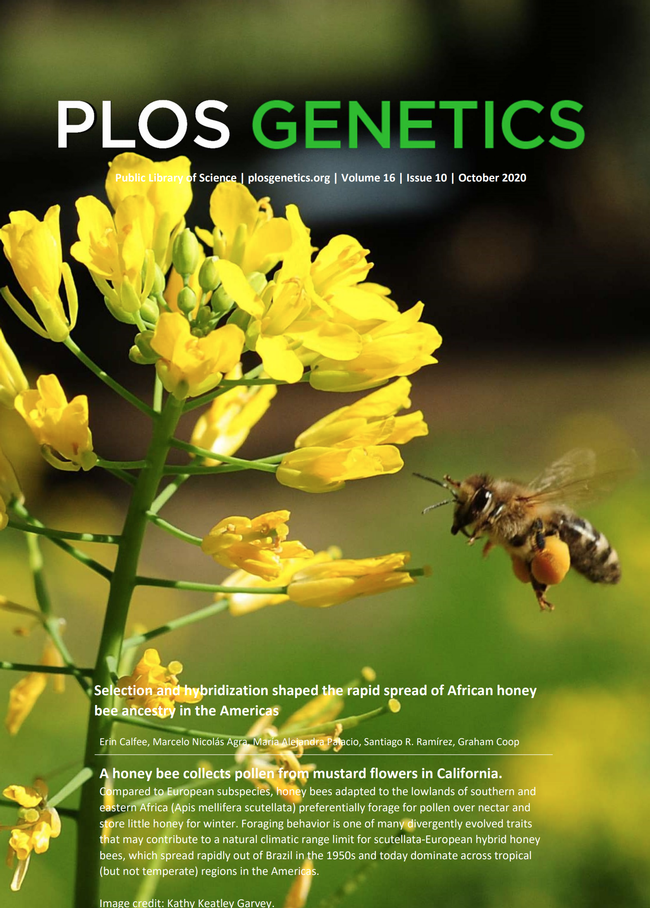