Those oak trees (Quercus lobata) in California’s Central Valley have a lot of gall.

Ian Pearse, Maxwell Joseph and Melanie Gentles of the UC Davis Department of Entomology recently surveyed 1234 oak apple galls in Davis and Woodland (Yolo County) and Vacaville (Solano County) and got a better understanding of the gall-making wasps and the organisms that prey upon them or live with them.

“Oak apple galls are themselves a complex ecosystem, with over 20 species of insects, that are in many people’s backyards,” said Pearse, who is studying for his doctoral degree in entomology with major professor Rick Karban.  “The galls and their wasps are not a major problem for oaks but are themselves food for other organisms such as birds and other insects.”

The wasp (Andricus quercuscalifornicus), a member of the Cynipidae family, lays her eggs on the leaves or twigs of a valley oak, which then forms a gall or a structure that resembles an apple hanging from the tree. “The gall is actually very beneficial, and necessary, for the insect,” Pearse said. In reality, the insect “’coerces’ the plant to make it a great home.”

“This community of insects has been poorly described for most cynipid-induced galls on oaks in North America, despite the diversity of these galls,” Pearse said.  Cynipids are small solitary wasps that produce galls on oaks and other plants.

Their research, published in a recent edition of the international journal Biodiversity and Conservation, shed light on the natural history of the common oak apple gall and its parasitoid and inquilines community.  They found that the composition of the insect community varies with galls of different size, phenology and location.

Galls provide their inducer with a consistent food source, a predictable abiotic environment, and a refuge from potential enemies, Pearse said.

Galls, which hang on the valley oaks like apples, are especially visible this time of year.

Researcher Maxwell Joseph, who received his bachelor of science degree last year from UC Davis, is now studying for his doctorate in ecology and evolutionary biology at the University of Colorado. Melanie Gentles, who holds a master's degree from UC Davis, is now the UC Davis campus arborist. 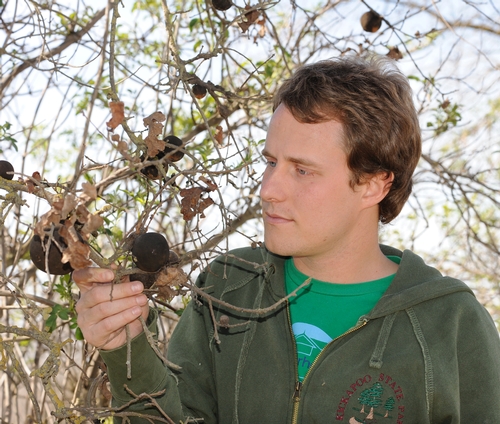