“At 1:55 p.m., I saw a male rapae flying a linear path along the edge of the waste ground between campus parking lot 1 and the railroad track, heading east,” he wrote in an email. “It stopped to nectar at a large Raphanus (wild radish) plant. That was directly south of the Manetti-Shrem Art Museum. I did not have a net and, there being no contest requiring a voucher, I did not care. It was 72F and clear with a trace of NE wind. I kept going. This is the earliest rapae since i.16.16 (Jan. 16, 2016)."

"Wouldn't it have been nice for the first one to be on the day of Biden's inauguration?" he asked.

Colleague Matthew Forister, the Trevor J. McMinn Research Professor of Biology at the University of Nevada and a former graduate student of Shapiro's, analyzes and graphs the annual data.  "The observed day (Jan. 16) is a couple of days earlier than the line would have predicted--in a funny twist of fate, before adding the new data point, the predicted day for this year was inauguration day!" Shapiro launched the contest in 1972 as part of his scientific research to determine the first flight of the Pieris rapae.

The traditional rules: if you collect the first live cabbage white butterfly of the year in the three-county area of Sacramento, Solano and Yolo, and deliver it to 2320 Storer Hall, UC Davis campus, from 8 a.m. to 5 p.m., Monday through Friday (and detail the exact time, date and location of your capture), and it's judged the winner, you win a pitcher of beer or its equivalent. It's all in the name of research. Matthew Forister (Courtesy of University of Nevada)
Shapiro, who maintains a research website at http://butterfly.ucdavis.edu, has monitored butterfly population trends on a transect across central California at approximately two-week intervals since 1972, except when the COVID-19 pandemic struck last March and interrupted his research. His fixed routes at ten sites in Central California range from the Sacramento River delta, through the Sacramento Valley and Sierra Nevada mountains, to the high desert of the western Great Basin.  The sites represent what he describes as "the great biological, geological, and climatological diversity of central California."

This year, however, Shapiro canceled the beer-for-a-butterfly contest "because (a) all the bars are closed open-endedly and (b) the level of circulating virus is so high that I am remaining in Davis and restricting myself to walkable sites to visit until it becomes less dangerous."

In 2020, Shapiro spotted the first-cabbage-white-of-the-year at 11:16 a.m., Jan. 30 at Putah Creek Nature Park, Winters but didn't claim the prize as he didn't collect it. "It flew back and forth across Putah Creek and then departed the area, flying out of reach above the trees," he noted.

Shapiro, who usually finds the first butterflies, has been defeated only four times, and all by UC Davis graduate students: Jacob Montgomery in 2016; Adam Porter in 1983; and Sherri Graves and Rick VanBuskirk each defeated him in the late 1990s.

The butterfly inhabits vacant lots, fields and gardens where its host plants, weedy mustards, grow. In its larval stage, it's known as the imported cabbageworm, and is a major pest of cole crops, including cabbage, broccoli, Brussels sprouts, cauliflower, and kale. 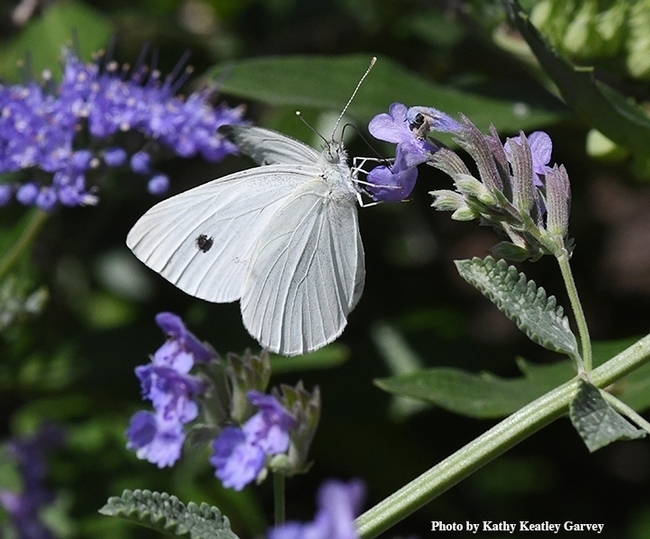 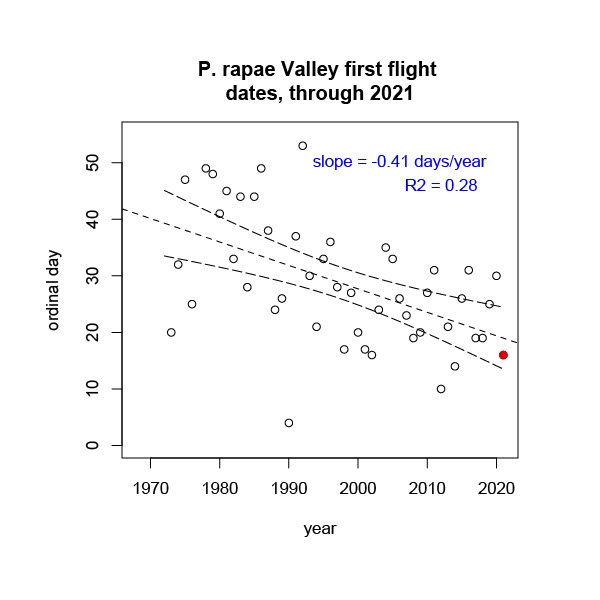