Make that "an early, unexpected guest who was given a warm welcome and an even warmer send-off."

Winter monarchs are becoming more and more common in the Bay Area and near the coast, according to butterfly experts Art Shapiro, UC Davis distinguished professor, and David James, associate professor at Washington State University.

Karen Gideon's front yard in Greenbrae yielded the caterpillar on her milkweed, “Hello Yellow" Asclepias tuberosa, on Dec. 9. The perennial, also known as "the butterfly weed," is native to eastern and southwestern North America.

Karen gifted the caterpillar to her friend, UC Master Gardener Alanna Brady of Ross, who reared him to adulthood from Dec. 9 to March 4, the day he eclosed.

“There were so many caterpillars in different stages/sizes all over the plant they were eating the stems down, too!” Alanna related. "Karen gave me one small and one large ‘cat since I had none. I think Henry was in his second instar stage, but we don't really know. The larger 'cat was gone the next day--never found, but Henry remained to feast on the entire plant! All other caterpillars left and she didn't find any chrysalids."

While Henry was cycling through metamorphosis, Alanna nicknamed him "Slow Poke."

In the monarch world, the life cycle from egg to caterpillar to chrysalis to adult, goes like this:

”It was an amazing experience,” Alanna said, noting that this is her first year rearing monarchs. She missed the eclosure. "I missed it—literally within 5 minutes he was out! He took a long time pumping up those wings! He hung around Friday morning and took off in the afternoon.  I am ready to do this again! So amazing.”

Why did she name him Henry? “After so many weeks of eating here, he needed a name--and "Henry" suited his voracious appetite--and being a monarch! Henry j'd and attached to our (mobile) teak birdhouse so I could move it into the sun in the afternoons. He remained outside the entire time except for one night below 32 degrees in our shed.”

So, on Friday, March 5, Henry the Winter Monarch fluttered away from his Ross home. Perhaps he soon found some nectar, a sunny spot to warm his wings, and a mate. Who knows?

One thing's for sure: "We miss Henry,” Alanna said. This is the empty shell of the chrysalis (known as an exuvium) that Henry exited. (Photo by Alanna Brady)
Researching Monarchs
WSU entomologist David James, who studies monarchs and posts his research on the Monarchs of the Pacific Northwest Facebook page, is keeping a close watch on the winter monarchs.

"As Director of the Washington State University Monarch tagging program, I would like to appeal to all monarch lovers in California who have milkweed and monarchs still active in their backyards, to carefully check all the monarchs they see for a tag! During late summer and fall, we tagged and released about 1200 monarchs in Oregon, Idaho and Washington and to date seven of these have been found in inland areas of CA around milkweed. None have yet been found at overwintering sites. This is very different from previous years when most sightings of our tagged monarchs occur at overwintering sites. We suspect that a far greater proportion of migrant monarchs this year have become reproductive and are staying inland rather than remaining non reproductive and overwintering at coastal sites. So please check that next incoming monarch for a WSU tag, photograph it and report it here or to the email address on the tag, Your observations are important!"

On Jan. 12, he posted a graph "showing the number of observations of monarch larvae/pupae (as recorded on I-Naturalist) in the San Francisco Bay area during November/December for every year since 2015. The graph showed a huge (>5X) increase in observations in 2020 compared to each of the the previous 6 years."

"Reports continue to come in on monarch breeding activity in the San Francisco Bay area. In fact, there appears to be a flush of new adults and egg laying. This apparent new generation is likely to be the sons and daughters of the migrant generation that eschewed spending winter at the conventional overwintering sites, in favor of reproduction. I believe the well-being and survival of eggs being laid now and over the next few weeks in the Bay area will play a role in determining the size and extent of western monarch populations this summer. With only 1914 monarchs at overwintering sites (50% sex ratio = estimated 950 females), current Bay area breeding populations may well support at least this number of females."

Endangered Species?
Note that the U. S. Fish and Wildlife Service, in a Dec. 15, 2020 press release, agreed that the monarch butterfly should be listed under the Endangered Species Act, but said that other priorities preclude that for now.

"After a thorough assessment of the monarch butterfly's status, the U.S. Fish and Wildlife Service  has found that adding the monarch butterfly to the list of threatened and endangered species is warranted but precluded by work on higher-priority listing actions," the press release indicated. "With this decision, the monarch becomes a candidate for listing under the Endangered Species Act (ESA), and its status will be reviewed each year until it is no longer a candidate."

Meanwhile, Henry the Winter Monarch is not alone out there! 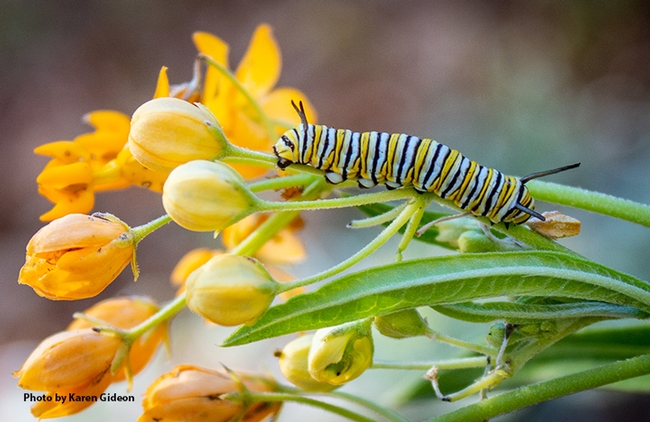 This is Henry as a winter monarch caterpillar found in the front yard of Karen Gideon, Greenbrae. It was feasting on her milkweed, “Hello Yellow” Asclepias tuberosa, native to eastern and southwestern North America. (Photo by Karen Gideon) 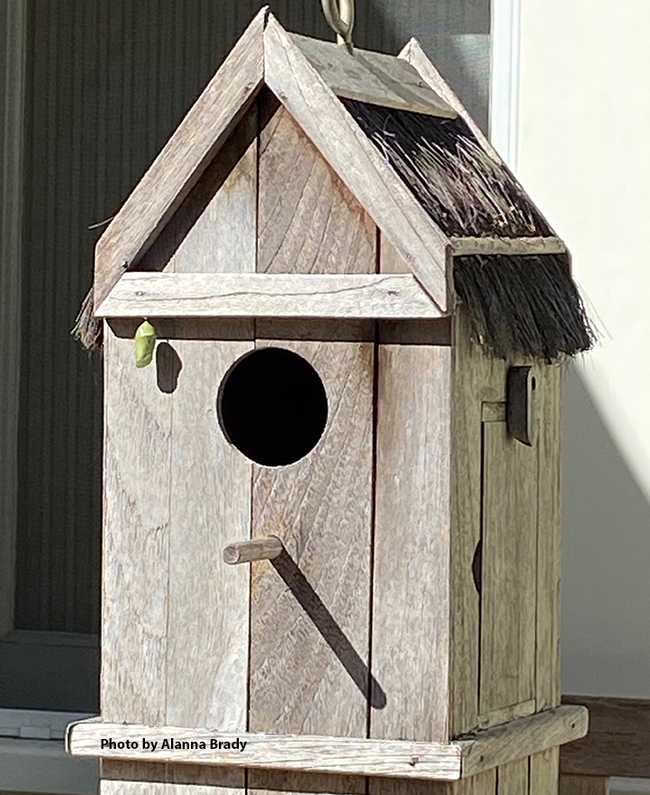 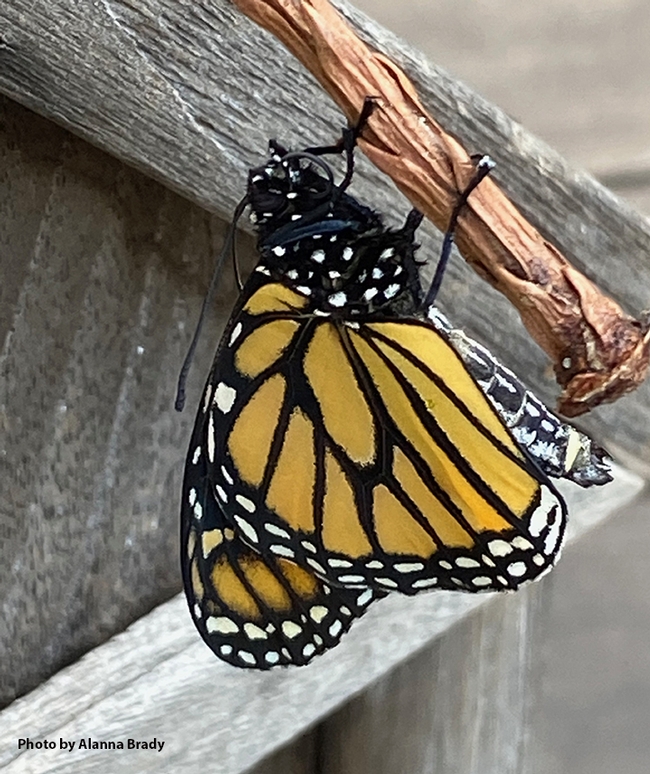 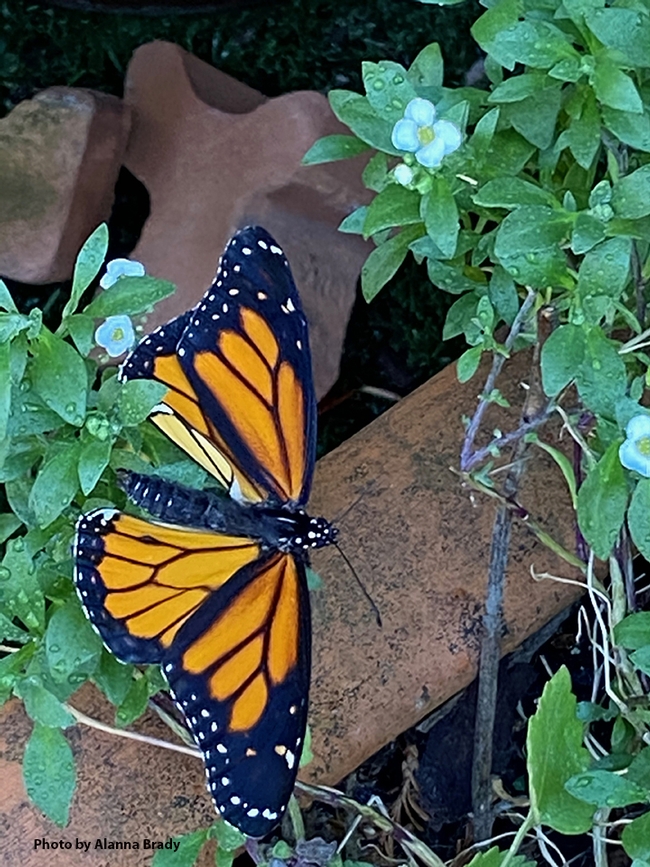 Seeds are cheap on Ebay. Garden centers sell plants in spring. Sadly, most treat them as spring flowers and it can be very difficult to get more plants in summer, just as your caterpillar population explodes, there are no plants. They 'cats won’t eat ANY other plant.

Plant LOTS and LOTS of milkweed to attract monarchs and you’ll see them.

They are a beautiful flower for beds as well, 'though comes and goes!

Aphids are an issue. They are easily washed off with a stream of water, and gently rubbed off, too. They do not tend to re-infest the plants because when you wash and rub them off, they leave their mouthparts.

Mesh butterfly cages allow you to get up close and observe the life cycle, which I think everyone should see once. It’s astonishing! Kids LOVE watching. Instructions on how to do that are all over the internet. You’ll maybe want two cages (or more) to separate the sizes. The caterpillars are cannibals and big ones will eat the smalls.

I bought my first three tiny milkweeds from a garden center. Couldn’t plant for a couple days, and when I went out to plant...they were FILLED with tiny 'cats! Commence panic shopping for more milkweed! Go crazy and spend a LOT and grow tons of them, or be fierce and let them eat each other to keep cage life on your budget.

I’d drive them to wild, beauty areas to release, as it’s overdeveloped where I live. Friends and loved ones love that part!

It’s not too late (June) to plant milkweed. They’ll need food on the return journey too.

It’s best to have other flowers for nectar for the stragglers in autumn, but trim the milkweed to the ground in late fall. You don’t want to encourage them to stay, but they’ll still need nectar for their journey.

Everyone needs to put out some native to their area, varieties of milkweed to keep these majestic beasties here!
Leave a Reply: