Bug Squad
sitenum=63
Happenings in the insect world
'When I Grow Up, I Want to Be an Entomologist' Rebecca "RJ" Millena as a pre-schooler at the Lawrence Hall of Science.
How many kindergarten students have you heard say "When I grow up, I want to be an entomologist?"

Five-year-old Rebecca Jean "RJ" Millena could have told you.

When she entered kindergarten in Concord, Calif., RJ penciled this on her "About Me" poster: "When I grow up, I want to be an entomologist."

To the amazement of her teacher and classmates, she even knew how to spell the five-syllable word referring to "the scientific study of insects."

Fast forward to today. She's 22, a senior majoring in entomology at the University of California, Davis, and an outstanding student researcher in the laboratory of UC Davis Distinguished Professor Jay Rosenheim of the Department of Entomology and Nematology.

And she's just accepted a four-year, full-ride fellowship offer to complete a doctoral program at the American Museum of Natural History. She will join the systematics laboratory of Dr. Jessica Ware after receiving her bachelor's degree from UC Davis in June.

In 2019, RJ was one of four UC Davis undergraduates selected for a two-year funded research career with the University of California Leadership Excellence through Advanced Degrees (UC LEADS) program, which prepares promising students for advanced education in science, technology, mathematics and engineering (STEM). The UC LEADS scholars embark upon a two-year program of scientific research and graduate school preparation.

Guided by Rosenheim, RJ launched her independent research project on those bizarre Strepsiptera endoparasites that attack their hosts, the Ammophila (thread-waisted) wasps.

RJ says that “being able to work with Jay on this project investigating the host-parasite relationship between Ammophila wasps and Strepsiptera was what made me fall in love with this super weird order of endoparasites." As larvae, members of the order Strepsiptera, known as “twisted wings,” enter their hosts, including wasps and bees, through joints or sutures. RJ Millena with a stick insect at the Bohart Museum of Entomology.
"Parasitoids are the love of my life," she says. "I want to focus on everything to do with parasitoid/parasite-host interactions and how these interactions affect the rest of the world.”

Over a two-year period, she studied thousands of specimens at the Bohart Museum of Entomology. The UC Davis insect museum houses a worldwide collection of eight million specimens, including “about 30,000 specimens of Ammophila from multiple continents,” says director Lynn Kimsey, UC Davis professor of entomology. Global wasp authority and UC Davis doctoral alumnus Arnold Menke, author of the book, The Ammophila of North and Central America (Hymenoptera, Sphecidae), identified most of the Ammophila specimens in the Bohart Museum. His book is considered "the bible" of Ammophila research.

RJ went on to enter a poster, “Parental Care and the Risk of Maternally Vectored Pathogens: Ammophila Transmit Strepsipteran Parasites to Their Young,” in the March 2021 Koret UC LEADS Symposium poster competition and won top honors.

A dean's honor student with multiple interests, RJ plays French horn and trumpet in the UC Davis Video Game Orchestra. She performed two years with the California Aggie Marching Band-Uh. In her Davis apartment she tends to a colony of Madagascar hissing cockroaches, a scorpion, a tarantula, a tailless whip scorpion, and an African cat-eye mantis.  “Over the last four years at UC Davis, I've had a colony of millipedes, two other tarantulas, a giant Vietnamese centipede, and five other assorted mantis species. The five-year-old me would also be thrilled about that.”

But back to what children want to be when they grow up. Usually they say cowboy, truck driver, cook, teacher, dancer, actor, musician, artist, athlete, firefighter, detective, writer, police officer, astronaut, pilot, veterinarian, lawyer, doctor and the like.

RJ's highly contagious enthusiasm toward the scientific study of insects serves as a definite role model to young girls aspiring to careers in STEM. Women make up only 28 percent of the workforce in STEM, according to the American Association of University Women. RJ is closing the gender gap.

Heather entered her project in an Entomological Society of America (ESA) contest and won honorable mention.

In her video, she runs with an insect net, counts bugs in the Zalom lab, watches bees in a hive, and visits the Bohart Museum. At the Bohart, she hugs a display of butterflies and cradles a rose-haired tarantula and Madagascar hissing cockroach from its live "petting zoo."

"I wanna be an entomologist, so freakin' bad," Wilson sings. "I wanna be on the cover of Economic Entomology, smiling next to Frank and Jim Carey..."

"Frank and Jim" are Frank Zalom and James R. Carey, UC Davis distinguished professors in the Department of Entomology and Nematology. Zalom is a past president of the 7000-member ESA, and both were selected ESA Fellows.

Watch Heather Wilson's video at https://youtu.be/rwNbbJgXNXA and you'll probably decide being an entomologist sounds much more fun than being a billionaire. Who wants to be a billionaire, anyway? Let's go check out the insects!

The entomology line forms over there...don't crowd and don't cut in. 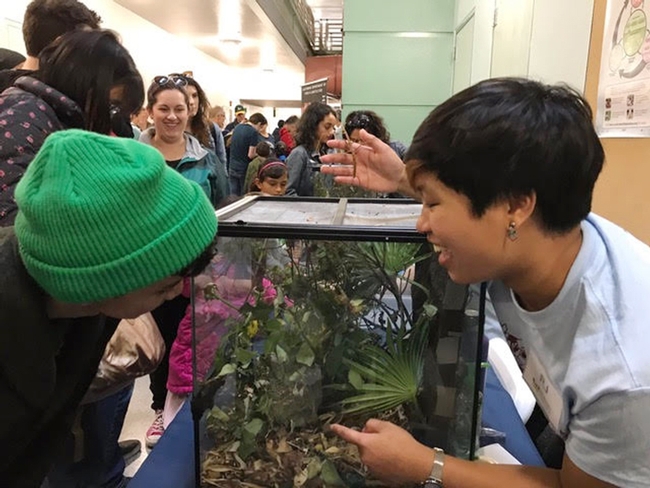 UC Davis entomology major Rebecca Jean "RJ" Millena shows visitors some of the critters in the Bohart Museum of Entomology. 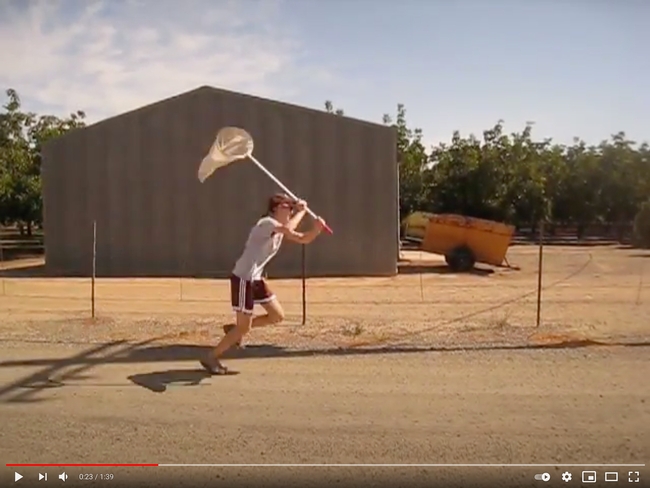