Introduction: Glassy-winged sharpshooter (GWSS, "gwiss") has been a significant threat to grape production in California for about 40 years, since its introduction in the 1980s.  Of course, GWSS is of concern because it is a highly effective vector for strains of Xyllela fastidiosa that cause Pierce's disease in grape and it spreads the bacterium far more effectively than native sharpshooters. In the Quantitative Biology & Epidemiology (QBE) group in Davis we have been looking at the long-term dynamics of GWSS in the southern San Joaquin Valley, using data from the insect trapping program operated by CDFA staff.  Our work is supported by the Consolidated Central Valley Pest & Disease Control Districts and this microblog and the associated webpage are intended to let our stakeholders stay up to date with progress.  We'll be using the blog for two or three different functions.

This season: Getting the starting date for degree day models is always a tricky issue. To keep things simple, we generally just use January 1 as the starting point unless there's good evidence that we'll be seriously off from making that choice.  Experimental studies under controlled conditions, and fitting field data to development models, suggest that GWSS don't accumulate much thermal time below about 53-54F and they probably don't like spending extended periods over 100F, even though triple digit temperatures won't kill them outright.  Within those broad limits it takes roughly 1150 - 1160 degree days for GWSS to complete their life cycle.  Under "typical" (we'll get to that slippery concept in a later blog) conditions in the San Joaquin Valley it takes about 20 weeks from January 1 for that many degree days to accumulate.  So, in a perfectly rule-based world, new GWSS eggs starting development on January 1 would be expected to have turned into adults by around May.  Is that what we see on the historical trap data?  Sort of.

The historical data collected in Kern County (see graph) show that adults are trapped in reasonable numbers in citrus throughout the winter and into spring, but it grape, numbers on traps won't start to go up until weeks 20-25 in the year.  A reasonable interpretation here, which accords with the experience of people who've worked on this problem for many years, is that the new generation of adults emerging in spring (in May) migrate out of citrus and spread out into grape and other woody crops.  The model, running from data collected at one of the weather stations east of Arvin, is currently predicting that the generation time (assuming a January 1 starting point) will be reached on May 25th-26th.  It'll be interesting to see if the trap catch data indicate that the third week in May reflect a peak in active GWSS adults.

Several people from the QBE group contribute to this work, but the main participants are QBE PI, Neil McRoberts and graduate student research assistant Alec Schmidt from the UC Davis Epidemiology Graduate Group. 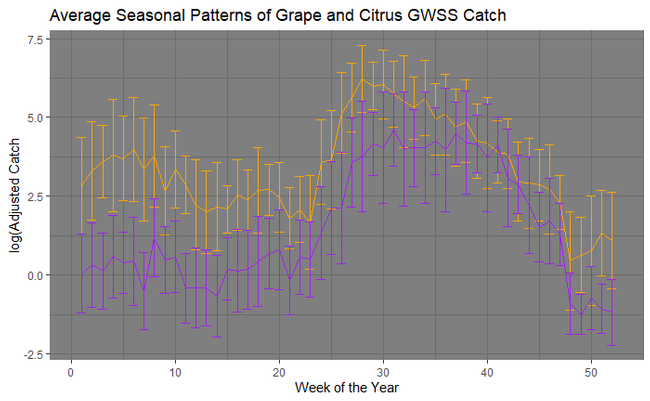