Chris Hamilton of the University of Idaho
What do tarantulas and Johnny Cash have in common?

When evolutonary biologist-taxonomist Chris Hamilton, a former doctoral student at Auburn University, Alabama, and now on the University of Idaho faculty, led a research team near the site of California's Folsom State Prison to look for tarantulas, he discovered a new species, solid black in color.

He named it Aphonopelma johnnycashi after Johnny Cash, the legendary country singer known as "The Man in Black."

Fast forward to this week:

Hamilton, now assistant professor in the Department of Entomology, Plant Pathology and Nematology, will speak on tarantula diversity when he presents a virtual seminar at 4:10 p.m., Wednesday, April 21 to the UC Davis Department of Entomology and Nematology. His  title: "Understanding Aphonopelma Diversity across the Madrean Pine-Oak Woodlands Hotspot by Integrating Western Science and Traditional Ecological Knowledge (TEK)." Click on this link to access the seminar.

Hosting the seminar is Jason Bond, the Evert and MarionSchlinger Endowed Chair in Insect Systematics, UC Davis Department of Entomology and Nematology, and Hamilton's major professor at Auburn University. Hamilton received his doctorate in evolutionary biology from Auburn University in 2015, after earning his master's degree in biology in 2009 from the University of Texas at Arlington.

Hamilton's naming of the new tarantula species drew widespread interest. Lindsay Miles of Auburn University's Office of Communications and Marketing wrote a 2016 news release:  "The species, Aphonopelma johnnycashi, was found in California near the site of Folsom State Prison, which Cash made famous in his song Folsom Prison Blues. The mature male Aphonopelma johnnycashi measures up to 6 inches across and is generally solid black in color, much like Cash's distinctive style of dress from which his nickname, 'The Man in Black,' was coined."

"Along with the Aphonopelma johnnycashi, Hamilton's study determined there are only 29 species of tarantula in the United States, 14 of which are new to science. Researchers had previously identified 55 species. The new descriptions nearly double the number of species known from the American Southwest, a region described as a  biodiversity hotspot featuring frigid mountains and scorching deserts."

The team, Miles wrote, "spent more than a decade searching for tarantulas throughout the American Southwest and studied almost 3,000 specimens, undertaking the most comprehensive taxonomic study ever preformed on a group of tarantulas." The study was part of Hamilton's dissertation, which was funded by two National Science Foundation grants made to Auburn University.

In the news story, Bond, then chair of the Department of Biological Sciences, praised Hamilton as "an accomplished field biologist and taxonomist (who) is also doing cutting-edge genomics research."

Miles pointed out that "Although this is the first time Johnny Cash has been honored by an Auburn researcher, Auburn University professors have garnered national attention in the past for naming celebrities, characters and even President Obama, with a species name. Bond has named species of trapdoor spiders after U2's Bono, actress Angelina Jolie and talk show host Stephen Colbert, to name a few. Jonathan Armbruster, also of the Department of Biological Sciences, made headlines last year when he named a newly discovered catfish species after the Star Wars fan favorite, Greedo." 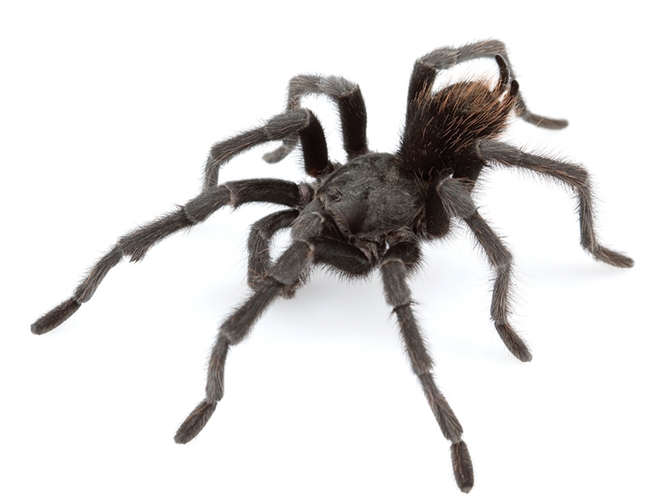