Freeze damage was reported in commercial walnut orchards throughout California during the winter of 2020. Although comprising the southern tier of the state's walnut-growing area, Tulare and Kings County orchards were not exempt from freeze damage. The damage caused by freezing temperatures in the fall are not perceptible until budbreak and leaf out the following spring. As a result, the extent of winter freeze damage is often not fully realized until well into the following season.

Walnuts are most susceptible to freeze occurring in late fall and early winter, prior to onset of full dormancy. Freeze damage may be caused by either an abrupt or rapid decrease in temperatures or a large fluctuation between day and night temperatures. Both the probability and extent of freeze damage are mitigated by climatic conditions that allow for a gradual acclimatization of the trees to colder temperatures as they enter dormancy.  Prior to complete dormancy, low temperatures of 22°F to 28°F may induce freeze damage; however, fully dormant trees may withstand lower temperatures (below 20°F) without sustaining damage (Sibbett, et al., 1998).  Tree health and soil-water status may also influence the occurrence of freeze damage (Sibbett, et al., 1998). For example, during the winter of 2020-2021, dryland farmed mature walnut trees in Lake County were killed by freezing temperatures, whereas irrigated trees in the region did not sustain the same damage (Elkins, R. June 2021).

Diagnosing freeze damage is largely based upon the distribution of the symptomatic trees in the orchard as well as the distribution of tissue damage on individual trees. Freeze damage may appear in low areas of the orchard where cold pockets of air settle (Figure 2A).  Affected trees may be adjacent to unaffected trees (Figure 2B). The outermost branches may die back but buds closer to the ground may survive and push in the spring (Figure 2C). Rootstocks are often less suscept to freeze injury due to the re-radiation of heat from the ground; however, excessively cold temperatures or cold air trapped by an inversion may offset the benefit of radiated heat from the soil surface. To diagnose freeze damage on a given tree or tissue, expose the cambium below the bark and look for darkened tissue. Growers may consider the potential to retrain scaffolds from surviving buds and shoots. The decision to retrain vs. replant may be based upon several factors including tree availability in the nursery trade, number of viable buds remaining, and overall extent of damage in the orchard.

Several methods have been suggested for preventing freeze damage in walnut orchards (Jarvis-Shean, 2016). Limiting nitrogen application and irrigation in September and during the post-harvest time will reduce the production of succulent shoot growth that may be more susceptible to cold damage as temperatures drop. Additionally, research studies conducted by Bruce Lampinen, CE Specialist, UC Davis, demonstrate that painting the trunks and shoots with dilute (50%) white interior latex paint after leaf fall will reduce the extent of temperature fluctuations at the plant surface, particularly on the southwest side of the tree. Studies conducted by Wilbur Reil, Farm Advisor Emeritus, demonstrated that application of the paint after a freeze event can still mitigate the damage. 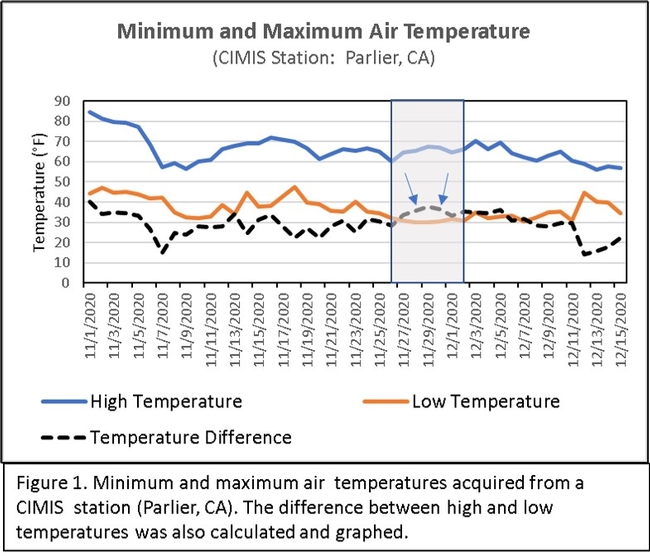 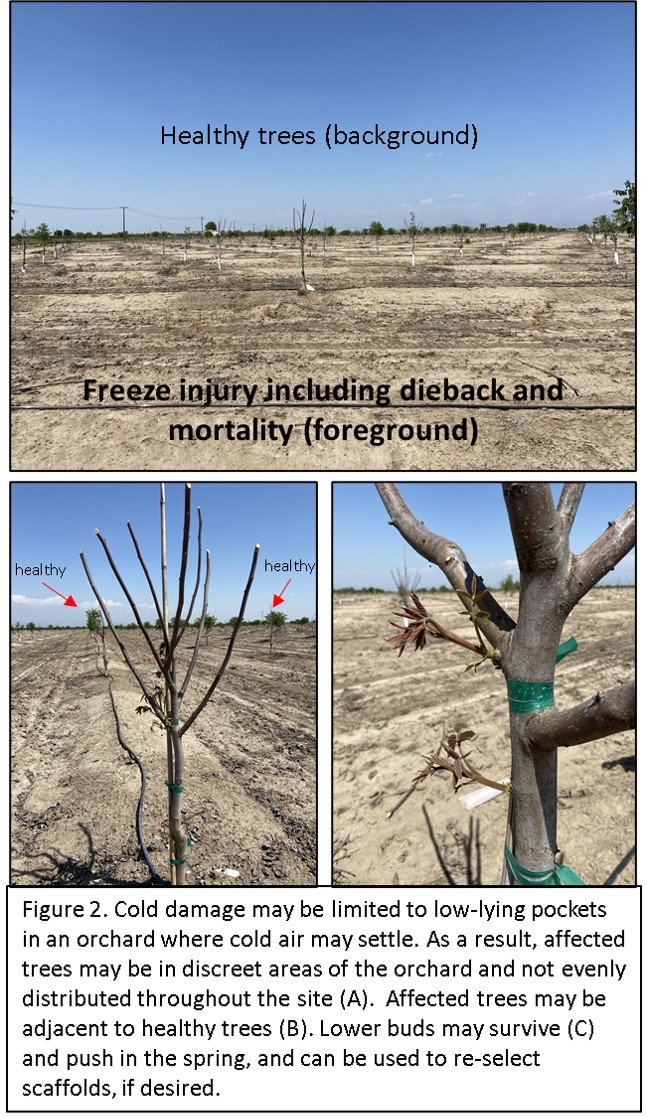