Bug Squad
sitenum=63
Happenings in the insect world
Artist Mark Rivera: He Made His Mark and His Mark Was Magical The hands of Mark Rivera (1971-2021) as he works to install art projects at the Häagen-Dazs Honey Bee Haven at UC Davis. (Photo by Kathy Keatley Garvey)
His name was Mark and he made his mark and his mark was magical.

We remember when professional ceramic- mosaic artist Mark Rivera of Davis joined fellow artists in May of 2013 to install newly created art projects at the UC Davis Department of Entomology and Nematology's bee garden, the Häagen-Dazs Honey Bee Haven on Bee Biology Road.

The talented artist was there to assist the UC Davis Art/Science Fusion Program, launched and directed by entomologist/artist Diane Ullman, UC Davis professor of entomology and former chair of the department, and artist-educator Donna Billick of Davis, a self-described "rock artist."

We remember Mark's paint-daubed hands, his gracious humility, and his gentle soul as he worked with Ullman and Billick to install the ceramic mosaic art on the planters at the haven. He and all of us around him were admiring the honey bees: bee motifs on the planters;  bees foraging on the flowers in the half-acre garden; and bees hived at the nearby Harry H. Laidlaw Jr. Honey Bee Research Facility.

His daughter, Jessica Williams, remembers him as "a kind, compassionate, and genuine soul who touched the lives of many.  He was also a talented mosaic artist and created countless pieces of art throughout his community of Davis, California." UC Davis entomology professor-artist Diane Ullman with professional ceramic mosaic artist Mark Rivera (1971-2021) at the Häagen-Dazs Honey Bee Haven. (Photo by Kathy Keatley Garvey)
"From a young age, Mark showed great creativity and artistic talent," his obituary in the Davis Enterprise reads. "He was never one to fit into the standard mold that society expected."

"Art and emotion intertwined for Mark. He channeled himself through different mediums, ultimately settling on ceramics, terrazzo and mosaics; these became his 'Mosaic Marks.'

"He was drawn to working on public works of art that were large and impactful. He started with public art in Denver and decided to make the big move in 2000 to Davis for additional opportunities to grow as an artist. He continued with pieces around Davis that reflected the evolution of his soul — having a daughter (Jessica), becoming an uncle (to Josie and Allie) and losing his father."

"His soul and his spirit shined from him and was witnessed by all who met him, leaving an everlasting impact."

"A Celebration of Life is planned for Thursday, June 10, in Central Park in Davis--preceded by an Art Procession from the  Co-Op at 4:30 p.m. The Celebration of Mark's Life will start in the Central Park gardens at 6 p.m. for a sharing of stories by those who experienced various aspects of his life."

Ullman recently wrote on her Facebook page: "Mark was a talented man, very kind and compassionate. He was a wonderful teacher and partner in community-built projects. In the UC Davis Art/Science Fusion Program, Mark assisted with nearly every installation we did on campus and even helped us install Nature's Gallery in Washington DC. In this go fund me campaign, his family is raising money for his funeral costs and memorial. If you wish to help, the link is here. His art installations grace our daily lives in Davis. He will be terribly missed." Newly installed art at the UC Davis Department of Entomology and Nematology bee garden in May of 2013. (Photo by Kathy Keatley Garvey)
Mark Rivera was indeed a treasure. His fellow artists, colleagues and friends are grieving as they post remembrances on the Go Fund Me memorial page and on his Facebook page.

Another friend posted author-poet Anita Krishan's quote that captures the artistic magic of the legacy of Mark Rivera:

“We are mosaics--pieces of light, love, history, stars--glued together with magic and music and words.” 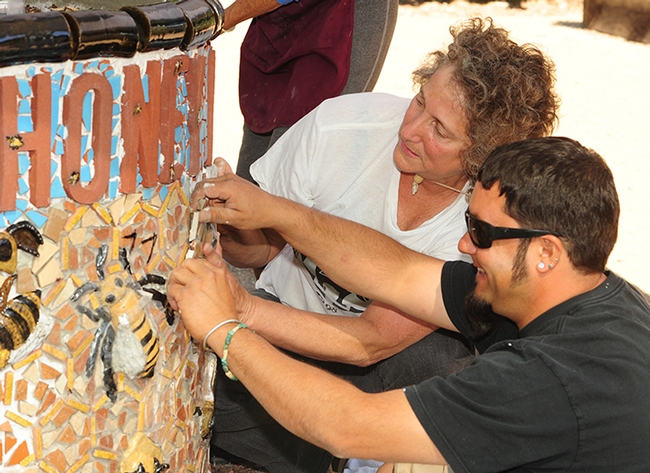 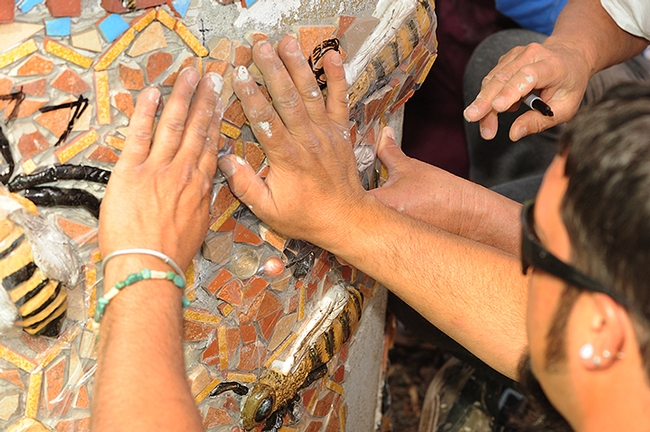 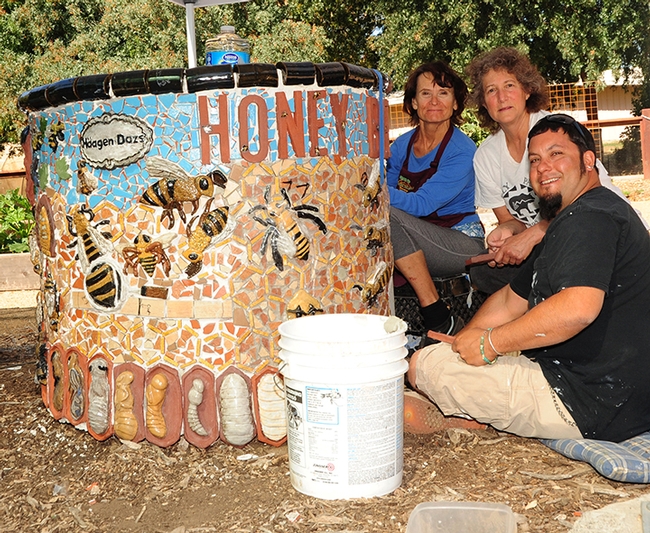 Artists installing the 2013 projects in the Häagen-Dazs Honey Bee Haven on Bee Biology Road pause for a photo. From left are Donna Billick, Diane Ullman and Mark Rivera. (Photo by Kathy Keatley Garvey) 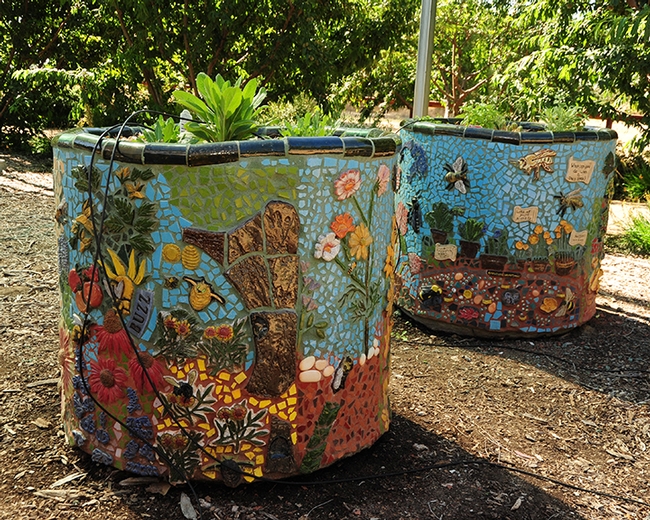