Lady beetles, aka ladybugs, are pollinators. These beneficial insects are known for eating scores of aphids. (Photo by Kathy Keatley Garvey)
When you think of pollinators, you think of bees, right?

And well you should: honey bees are the global workhorses of the pollination community and pollinate about one-third of the food we eat, including fruits and vegetables and some nuts, primarily almonds (California's almond acreage exceeds 1.6 million.)

But to continue the alliteration--butterflies, bats, birds and beetles are pollinators, too.

That includes "the good guys and gals," the lady beetles, aka ladybugs, which devour aphids.

However, this is National Pollinator Week and a good time to reiterate that insects can be both pollinators and pests. Take the blister beetles (family Meloidae, which contains about 2500 species) are one color or striped.  Blister beetles are a pest of alfalfa and many species secrete a poisonous chemical called cantharidin, which protects  them from their predators but is quite toxic to livestock, especially horses.

According to the Alfalfa Pest Management Guidelines published by the UC Statewide Integrated Pest Management Program (UC IPM): “Blister beetles do not cause widespread feeding damage to alfalfa; however, they contain a chemical, cantharidin, which is toxic to livestock. Cantharidin is contained in the hemolymph (blood) of the beetles, and can contaminate forage directly, when beetles killed during harvest are incorporated into baled hay, or indirectly, by transfer of the hemolymph from crushed beetles onto forage. Horses are particularly susceptible to the toxic effects of cantharidin. Consuming as few as six beetles can kill a horse.”

A 2020 news story out of the Midwest related that beetle-infested hay purchased at an auction in South Dakota led to the deaths of 16 horses at a riding stable in Mauston, Wisconsin. Reporter Carleen Wild wrote that even a small amount of the bug itself or cantharidin "can be toxic enough to kill a horse within 72 hours." The horse owners reported what looked like "blisters and holes down their esophagus and throughout their insides."

The odorless, colorless chemical also blisters the human skin; physicians use it to remove warts. 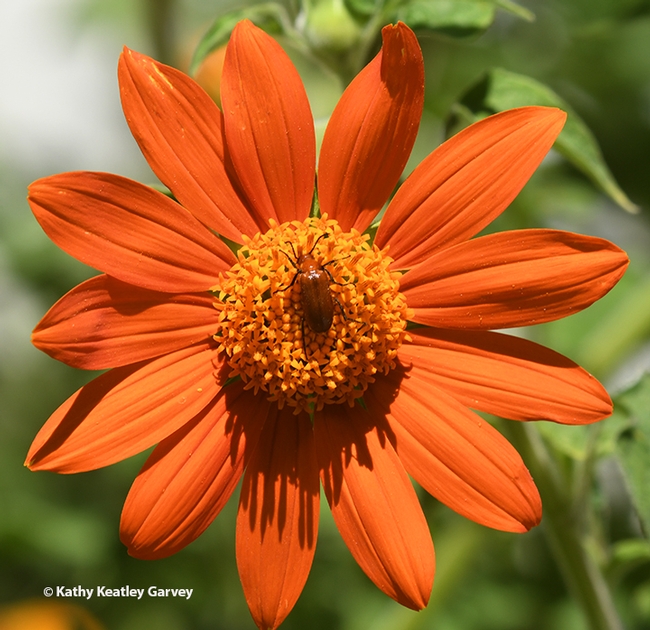 The blister beetle is both a pollinator and a pest. It is a pest of alfalfa and is toxic to livestock, especially horses. This one is foraging on a Mexican sunflower (Tithonia rotundifola) in Vacaville. (Photo by Kathy Keatley Garvey) 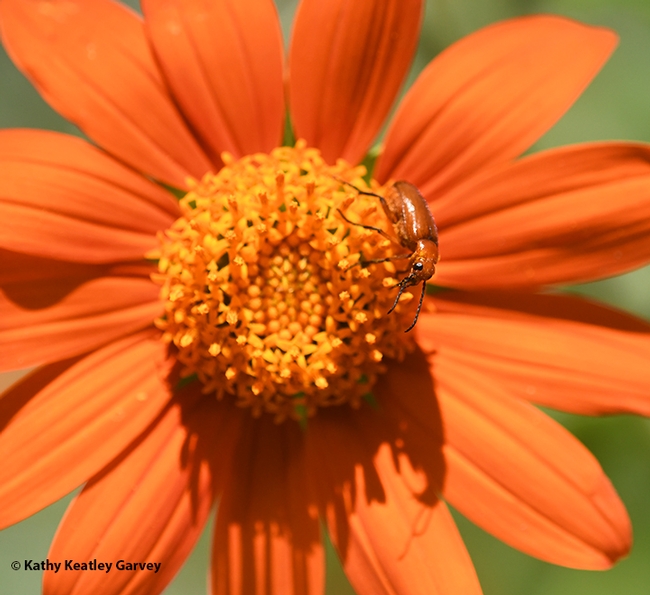 Side view of a blister beetle foraging on a Mexican sunflower (Tithonia rotundifola) in Vacaville. (Photo by Kathy Keatley Garvey) 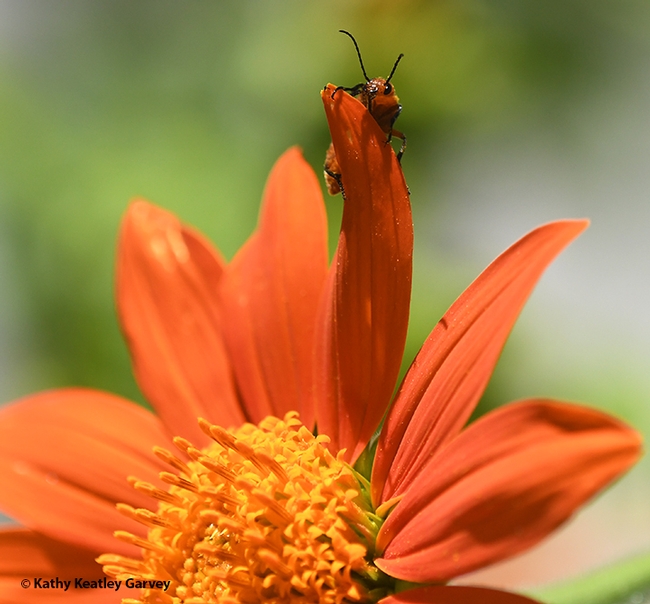