"Ant Man" Brendon Boudinot says the mandibles on the Vacaville ant are "quite chunky for this genus, Formica, so it might be a new species."
We're used to admiring street art that showcases such iconic insects as lady beetles, dragonflies and butterflies, but carpenter ants?

If you walk over the Ulatis Creek Bridge, Vacaville, to enter Andrews Park for the Fourth of July celebration on Sunday, you may be surprised.

There's a 12-inch sticker of a carpenter ant at the end of the bridge.

Noted "Ant Man" Brendon Boudinot recognized it immediately as a carpenter ant, of course. He knows his ants, inside and out.

Boudinot, who holds a doctorate in entomology (2020) from UC Davis, studying ants with major professor Phil Ward, is in Jena, Germany for a two-year Alexander von Humboldt Research Fellowship to research evolutionary and comparative anatomy.

"Haha awesome!" he wrote in an email. "Technically, I would consider this imperfectly identifiable because it lacks sufficient detail."

"However, using my sense of ant gestalt and the local fauna, I would say this is a Formica. The mandibles are quite chunky for the genus, so it might be a new species!"

If you ever want to talk ants, Boudinot is your man, the ant man. He wrote his dissertation on "Systematic and Evolutionary Morphology: Case Studies on Formicidae, Mesozoic Aculeata, and Hexapodan Genitalia" and received the coveted 2020 Robert E. Snodgrass Memorial Research Award from the Entomological Society of America (ESA), an award recognizing outstanding research by a PhD student who has completed a research thesis or dissertation in arthropod morphology, systematics, taxonomy, or evolution. (Nominees are scored on honors, awards, achievements and recognition; recommendations of professors and advisors; grantsmanship, publications, creativity and innovation of thesis or dissertation; and contribution to morphology.) Boudinot also drew widespread recognition when he won the 2019 John Henry Comstock Award, the top graduate student award given by ESA's Pacific Branch. The branch encompasses 11 Western states, U.S. territories, and parts of Canada and Mexico.

But back to the Art of the Ant.

Who did it? And why? A myrmecologist or an ant enthusiast or a future entomologist?

Maybe someone who read the April 5, 2021 feature, "Let Us Now Praise Tiny Ants," in the New York Times?

"We share our world with at least 15,000 unique species of ants — although this is surely an underestimate, as we have no way to count the number of species still unknown to science," wrote journalist Brooke Jarvis. "It is hard to express how ubiquitous they are. If you were to put all the animal life in a Brazilian rainforest on a scale, more than one-quarter of the weight would come just from ants. Even the sidewalks of New York City — where pedestrians walk unknowingly above armies of pavement ants that undertake huge, deadly turf wars each spring, dismembering each other in epic battles for territory — are teeming. One study found an average of 2.3 ant species on a given city median, doing the invisible work of making fallen potato chips and hot dogs disappear by the pound. Even in our densest habitations, there are orders of magnitude more of them than there are of us."

So during the Fourth of July celebration in Andrews Park, when fireworks explode and people applaud and cheer, will they remember that ants are all around them? Probably not. Still, as Jarvis wrote there are "more of them than there are of us."

Including one "permanent resident" on the bridge. Yes! 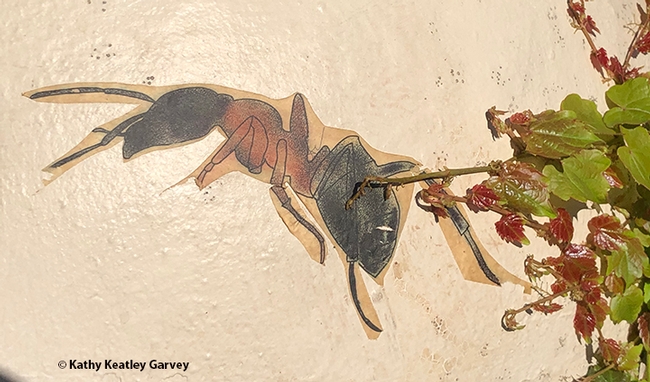 Street art usually focuses on such insects as bees, butterflies and dragonflies, but at Vacaville's Ulatis Creek Park, someone affixed this carpenter ant. (Photo by Kathy Keatley Garvey) 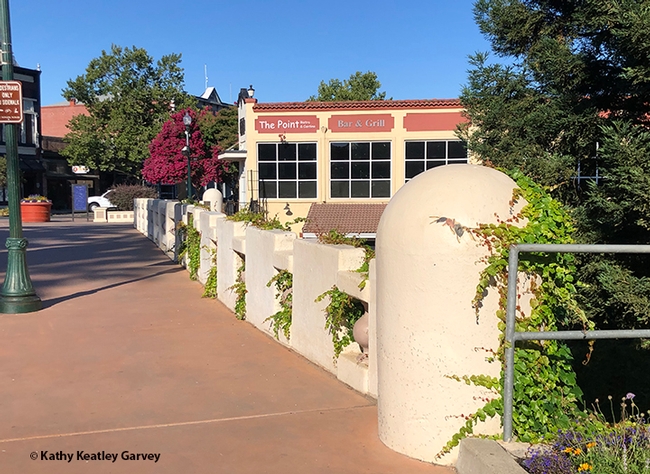