Throughout the year, we haven't been seeing this species, Pieris rapae, much--and neither has Art Shapiro, UC Davis distinguished professor of evolution and ecology who has been monitoring all the butterfly populations of the Central Valley since 1972.  Usually, cabbage whites are quite prevalent. (See his research website.) As you may remember, he sponsors the annual "Beer-for-a-Butterfly Contest." The first person to collect the first cabbage white of the year--in Yolo, Sacramento or Solano counties--receives a pitcher of beer or its equivalent. It's all for scientific research; he's studying the first flights of this species.

But back to the two cabbage whites fluttering in our garden. One seemed quite interested in the other. A suitor?

In one image (below), they both raised their abdomens. A male cabbage white butterfly, Pieris rapae. (Photo by Kathy Keatley Garvey)
They were exhibiting typical courtship behavior, Shapiro said. "The male, at right, is scattering pheromone on the female, who by raising her abdomen indicates she isn't interested. This is known in the trade as 'tail in the air.'"

The cabbage white butterfly is also known as the European cabbage butterfly. Shapiro provides interesting information on his website about this species:

"Our only introduced butterfly--from the Old World--this is also one of our weediest, occurring in disturbed habitats from sea level to about 8000.' It even invades riparian woodland and montane coniferous forest habitats in summer. We are not certain how or when it reached our area. We know the species was introduced in southern Canada in the 1850s; the great Lepidopterist Samuel H. Scudder traced its spread, but was unable to resolve the history on the West Coast. It was not in San Francisco in the early 1880s, but was abundant by the time of the earthquake (1906). There is a mysterious specimen sent by the early collector Lorquin to Tryon Reakirt in Philadelphia, which may have been collected at Yreka in Gold Rush days. Was there an early introduction by the Spanish during the Mission Period?"

"In a typical year, after overwinter mortality, numbers of this species rise rapidly to a peak in late spring, exploiting almost unlimited quantities of host plants (weedy mustards). Then all the annual hosts (Brassica and Raphanus) die off by the 4th of July, and the butterfly is forced to contract down to local pockets of hosts that remain green in summer--cultivated Crucifers and Nasturtiums, the perennial mustard Hirschfeldia incana, and the aggressive weed Tall White-Top or Perennial Peppergrass, Lepidium latifolium. This last plant has invaded the western Great Basin, producing virtual monocultures along the Truckee River and other watercourses, and spreading the butterfly into areas where it had been rare or absent not so long ago."

Agriculturists probably wish the cabbage white butterflies would be more absent, as the larvae, known as "imported cabbageworms," are pests of crucifer crops such as cabbage, kale, bok choy and broccoli. (See the Pest Management Guidelines on the UC Statewide Integrated Pest Management website.)

As for the two in our garden this week, the female lingered for a little more nectar.  The male butterfly fluttered silently away.

Rejection.  Rejection in the butterfly world. 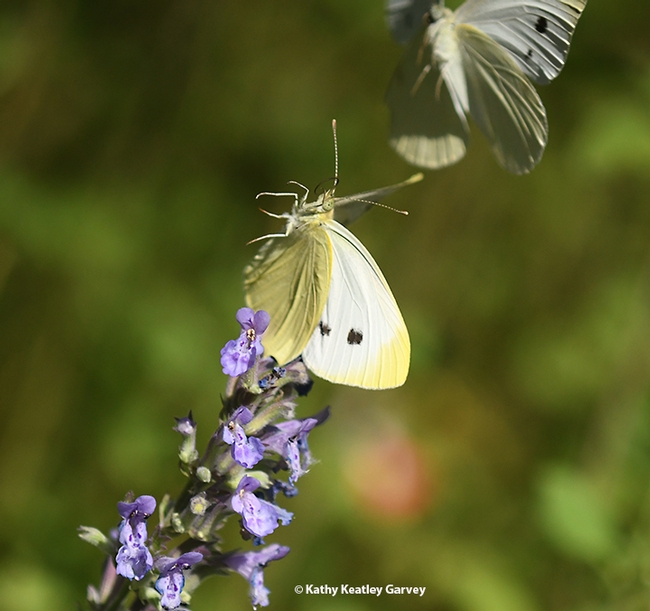 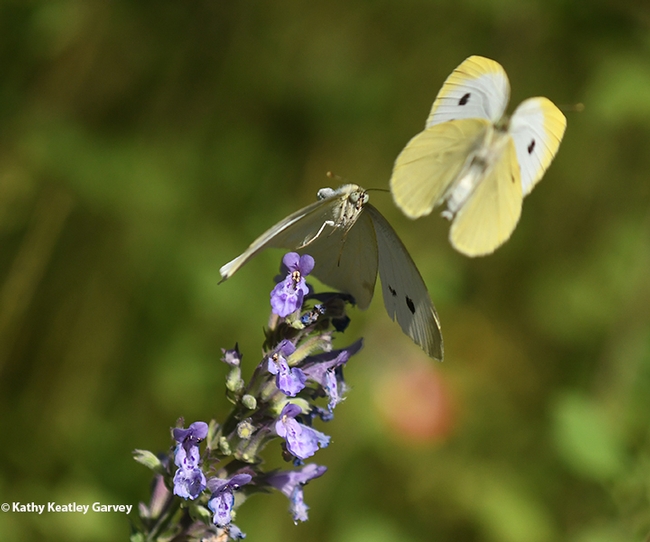 Look at me! A male cabbage white butterfly tries to draw the attention of a female. (Photo by Kathy Keatley Garvey) 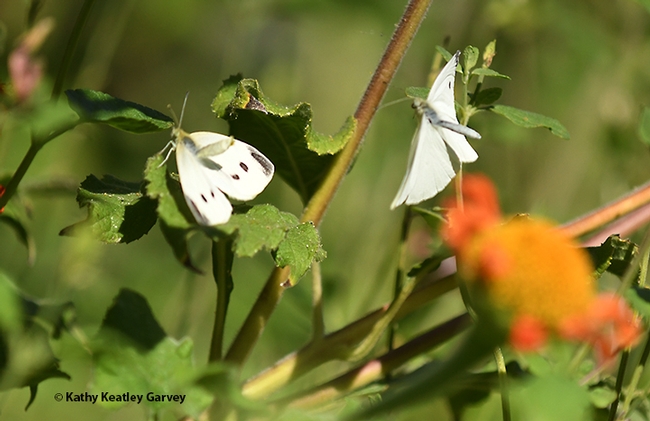 In this image, the female cabbage white butterfly (left) raises her abdomen, rejecting the male that is scattering pheromone on her, says Art Shapiro, UC Davis distinguished professor of evolution and ecology. (Photo by Kathy Keatley Garvey)
Focus Area Tags: Environment, Pest Management, Yard & Garden
Tags: Art Shapiro (263), cabbage white butterflies (3), courtship (2), imported cabbageworm (1), Pieris rapae (44), suitor (1), UC Davis Department of Entomology and Nematology (601)
Comments: 1
Comments:
by Florence Nishida
on July 15, 2021 at 11:41 AM
Thanks as always for good information and wonderful photos. Would it be possible to provide in the write-up, a link to the plants referred to? Would be so quickly convenient for us to see the host plants.