The set-up? It's basically a white sheet lit by an ultraviolet (UV) light, which attracts night-flying critters.

What a treasure to see this beautiful moth!

The large tannish-colored moth (wingspan 4 to 6 inches) is known for the striking eyespots on its hind wings--which probably distract, startle or confuse predators. In fact, the name originates from the cyclops Polyphemus in Greek mythology.

Karofelas, a longtime naturalist and avid photographer,  decided to rear the species and photograph the life cycle. He  credited UC Davis entomology student and researcher Gwen Erdosh (who goes by "Gwentomologist" on Instagram) with showing him "how to keep it alive in a critter cage.”

The Polyphemus silk moth laid  flat, light-brown eggs, and the eggs hatched into larvae or caterpillars. They fed on the leaves of a host plant, the Valley oak. Kareofelas said he reared and released a total of nine moths. They emerged as adults on June 21. The entire process, from egg to larva to cocoon to adult, took less than two months.

In celebration of National Moth Week, July 17-25,  Karoefelas created a video of the process, now posted on  YouTube at https://youtu.be/Ppsa7P7wr8M.

This Polyphemus moth is thought to be the same species that Alice of Lewis Carroll's "Alice's Adventures in Wonderland"  encountered, Kareofelas related.

Excerpts from the book:

The Caterpillar and Alice looked at each other for some time in silence....
'Who are you?' said the Caterpillar.
This was not an encouraging opening for a conversation. Alice replied, rather shyly, 'I — I hardly know, sir, just at present — at least I know who I was when I got up this morning, but I think I must have been changed several times since then.'
'What do you mean by that?' said the Caterpillar sternly. 'Explain yourself!'
'I can't explain myself, I'm afraid, sir' said Alice, 'because I'm not myself, you see.'
'I don't see,' said the Caterpillar.
'I'm afraid I can't put it more clearly,' Alice replied very politely, 'for I can't understand it myself to begin with; and being so many different sizes in a day is very confusing.”

This moth is just one of some 250 different species of moths that Kareofelas has recorded in his backyard. Blacklighting is something anyone can do, he says.

"Polyphemus moths are our most widely distributed large silk moths," according to Wikipedia. "They are found from southern Canada down into Mexico and in all of the lower 48 states except for Arizona and Nevada."

The Bohart Museum, located in Room 1124 of the Academic Surge Building on Crocker Lane, UC Davis campus, is temporarily closed to the public due to COVID-19 pandemic precautions. COVID, however, hasn't stopped the Bohart scientists from publicly celebrating National Moth Week via videos posted on their home page (more to come). 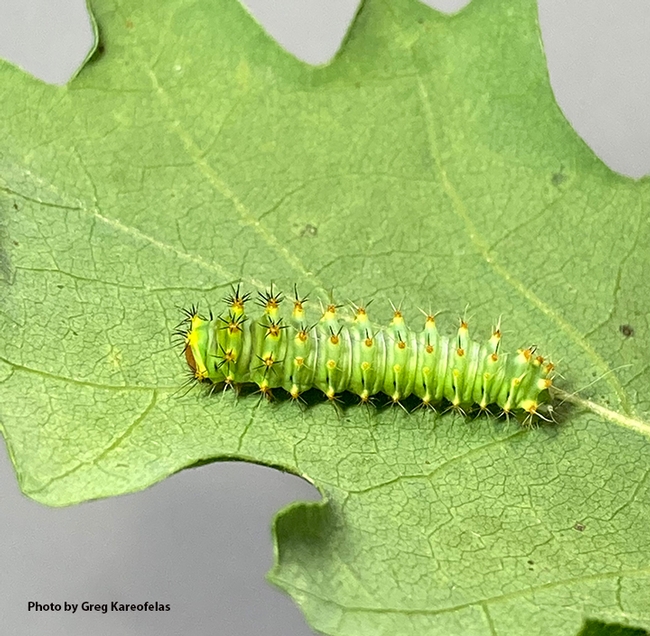 This image, taken May 2, shows the larva of the Polyphemus silk moth, Antheraea polyphemus. (Photo by Greg Kareofelas) 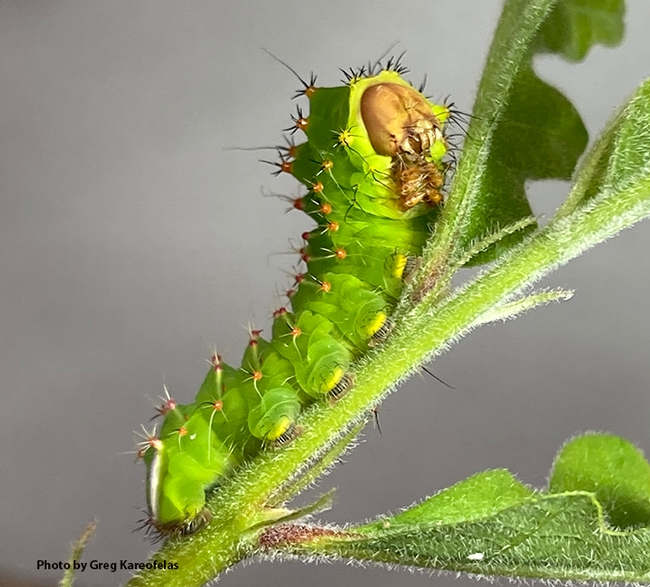 On May 9, the caterpillar of the Polyphemus silk moth, Antheraea polyphemus, looked like this. (Photo by Greg Kareofelas) 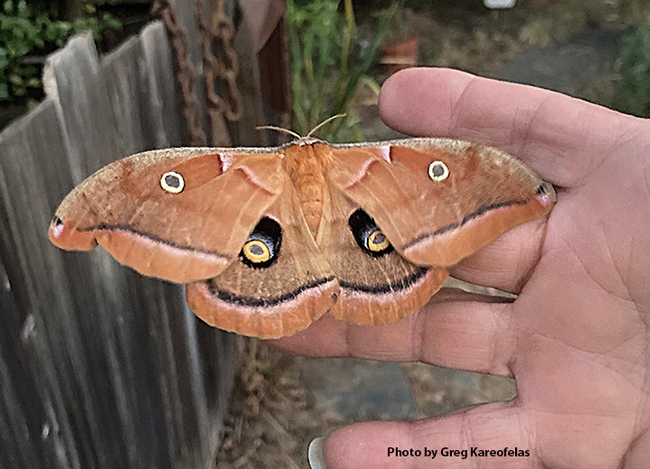