And a rousing double cheer to the National Science Foundation (NSF), and Professor Jason Bond,  the Evert and Marion Schlinger Endowed Chair in Insect Systematics, UC Davis Department of Entomology and Nematology

NSF recently implemented its Research Experience for Post-Baccalaureate Students (REPS) to recognize  “the importance of early-career research experiences, especially for individuals contemplating a career in science, technology, engineering, and mathematics (STEM) research, and the impact that the COVID-19 pandemic has caused on the career trajectories of undergraduate students who were denied such a research experience."

NSF officials went to point out: "Many undergraduates, who had been planning to participate in research experiences this past year-- whether through Research Experiences for Undergraduates (REU) Sites, REU supplements, or individual arrangements with faculty mentors– found that their host labs or research settings were not able to accommodate them due to restrictions imposed by the pandemic. Students from underrepresented groups and those from schools with no access to research are particularly impacted...”

So it is great news that Iris Bright and Megan Ma, two outstanding young scientists are now part of the REPS program. They're gaining research experience in the Bond laboratory. Iris Bright's projects included these pinned Onymacris (tenebrionid beetles from Namibia). (Photo by Kathy Keatley Garvey)
“The National Science Foundation put together a new ‘emergency' type of program earlier this year to support students that might have fallen through the cracks in terms of getting research experience due to the pandemic,” commented Bond,  who specializes in the evolutionary diversification of terrestrial arthropods (spiders, millipedes, and tenebrionid beetles). Prior to joining the UC Davis faculty in 2018, he directed the Auburn University Museum of Natural History and chaired Auburn University's Department of Biological Sciences.

Bond obtained supplemental funding from both his NSF grants to support the two young scientists  through the REPS program. “It's great to have Iris and Megan in the lab and potentially add a couple of really exceptional women to our entomology graduate programs, and future professoriate,” Bond said. “The REPS program provides full time employment for Iris and Megan to work in the lab for one year.”

Both Bright and Ma hope to enroll in graduate school, obtain their doctorates, and become professors.

Iris Bright, a fine arts graduate who switched to science, is attending classes at night at Sacramento City College, where she is working toward her associate of science degree in biology and her field ecology certificate to obtain the necessary prerequisites for graduate school in entomology. She received her bachelor of fine arts degree (creative writing and literature)  in the honors program from Emerson College, Boston, Mass., in 2015.

“This trip was an incredible invertebrate learning experience and it's where I met Dr. Jason Bond,” Bright recalled. “I afterwards was able to become a volunteer at the Bohart working on the Belize Bugs project with the help of Dr. Fran Keller which further enriched the experiences and knowledge I gained in the field.”

Joining the Bond lab has “really opened doors for me to get hands-on research experience that I was lacking and did not know how to obtain due to being a full-time worker,” she said. She had previously worked full-time at a Sacramento florist business to fund her education. Banded Alder Borer (long-horned beetle) (Wikipedia Photo)
Always Interested in Insects. Bright, who grew up in Paradise, Calif., in the Sierra Nevada foothills, said “I can't remember a time when I wasn't interested in insects and everything creepy crawly!”

“I started my first official bug collection around the age of 7 or 8 and it actually grew to be quite large,” she recalled. “My favorite specimen in the collection was a Banded Alder Borer (long-horned beetle) that my mom and I collected off the parking lot wall of a pet store. We were actually able to create a pretty unique display of the local insect life specific to that region. We also had a few specimens from friends in other states and comparing them to what I grew up seeing was my first foray into biodiversity.”

What fascinates her  about entomology? “I am fascinated by the complex inner and outer workings of insects,” Bright said. “They are all around us and contribute so many ecological services that we are still trying to discover. Delving into those mysteries is not only fun but incredibly important especially in our current species die-off. Also. they are beautiful, colorful, and strange looking! Seeing tiny green wasps or purple beetles under a microscope is endlessly exciting.”

Grandfather Was an Amateur Entomologist. Bright is not the first in her family committed to entomology. “When I first started expressing interest in insects, my mom walked into our basement and pulled out (entomological) supplies, forceps, pins, Schmidt boxes, etc. I was too young to realize that these were not essentials in every home. and later found out that my grandfather had been an ‘amateur' entomologist. My mom would watch him as he pinned (specimens) and started developing her own love for insects  which she was happy to revisit when she saw the same curiosity in me. She definitely instilled an appreciation for all nature in me from a very early age. In a way. I feel that becoming an entomologist will be putting an official title on a family tradition.”

Bright started working in the Bond lab in early August. “So far, I've been observing/assisting the graduate students with DNA extractions, and learning how to do digital imaging of specimens,” she said. “In the future, maybe Tenebrionidae (darkling beetle) work.”

She hopes to obtain her doctorate in entomology and become a professor “so I can do further research and also share my passion and interests with the next generations!”

Megan is a June 2021 graduate of UC Davis with a bachelor's degree in evolution, ecology and biodiversity and a minor in entomology.  Megan is an accomplished scientific illustrator.

“I love observing and recreating the colors and textures I see in biology through art,” she said. “I want to use both imaging techniques and systematics to study the function, ecology, and evolution of morphology in terrestrial arthropods, specifically in myriapods and arachnids.”

As an undergraduate, she worked  in the UC Davis laboratory of Jay Stachowicz, who specializes in marine community ecology. In the Bond lab, she is working on several projects involving wolf spiders, trap door spiders, and millipedes, as well as scientific illustrations.

First Generation College Student. A first-generation college student, Ma said that attending UC Davis as an undergraduate student and “getting a broad research and teaching experience has been extremely rewarding.”

“Getting involved in research early on (winter quarter of freshman year) really helped me hone in on what I enjoy about biology,” Ma said. “Some of the research projects I've worked on involve processing salt marsh plant matter for elemental analysis, studying the effects of warming and grazing on eelgrass, identifying marine invertebrates for biodiversity surveys, and using microCT imaging to visualize millipede genitalia development.

“I've been fortunate to have the opportunity to merge art and biology as an undergrad, as I've worked on the General Biology (BIS2C) laboratory manuals illustrations and taught scientific illustration at the Bodega Marine Laboratory to graduate students and professors. I've also begun to explore imaging techniques (like focus stacking and microCT) for studying spiders and millipedes in the Bond lab. Tarantula at the Bohart Museum of Entomology. (Photo by Kathy Keatley Garvey)
Intrigued by Terrestrial Arthropods. Born in Austin, Texas, but a resident of Alhambra, Calif., in the San Gabriel Valley, since age 3, Megan has long been intrigued by terrestrial arthropods (land-dwelling insects and their relatives, such as spiders, tarantulas, scorpions, praying mantids, and millipedes.)

Her interest in terrestrial arthropods piqued when she enrolled, as a freshman, in an “Introduction to Biology: Biodiversity and the Tree of Life” course, taught by Joel Ledford of the College of Biological Sciences faculty. “This was when I held Rosie The tarantula (at the Bohart Museum of Entomology) for the first time and learned about biology in the context of phylogeny. However, I didn't start rearing terrestrial arthropods until after joining the Bond lab around the end of my third year. Dr. Ledford introduced me to Dr. Bond and I started working as a scientific illustrator and research assistant for the lab with graduate student Xavier Zahnle.”

“During my first few weeks, Xavier handed me a female flat-backed millipede with black and orange coloring (Polydesmida: Xystodesmidae: Apheloriini),” Ma recalled. “I remember holding her with my bare hands and letting her crawl on my arm. Instead of worrying about potential repugnatory fluid secreting from her ozopores, I was thinking about how harmless she was, how little I knew about her, and how great it would be for me to study her.”

Millipedes, Tarantulas, Scorpions and Mantids. Ma immediately traveled to the Sacramento Reptile Expo, held that month, “and came home with my first two Florida Ivory millipedes (Chicobolus spinigerus). I knew I was hooked: I started prioritizing entomology courses.” She ended up adding an insect biology minor over other major courses and, in her free time, delved into arthropod husbandry information.  “In the past four years, I've kept a handful of millipedes, several colonies of isopods, tarantulas, scorpions, mantises, and leaf insects. I don't think I can imagine myself without them.”

What fascinates her about terrestrial arthropods? “Since there is an overwhelming amount of biodiversity yet to be explored, there's always a niche for researchers to fill,” Ma said. “I wasn't paying attention to the terrestrial arthropods around me before joining the lab and taking entomology courses--learning more about them has made me more in-tuned with my surroundings. It makes daily life a little more interesting whenever I come across an arthropod friend on the sidewalk. One of my favorite things to do is come home to see one of my arthropod pets molting. “

Her career plans? “Working in the Bond lab has made me realize I want to continue seeing science through an artistic lens. Eventually, I want to become a professor and researcher at an undergraduate institution. I'd like to use both imaging techniques and systematics to study the function, ecology, and evolution of morphology in terrestrial arthropods, with special interests in millipedes and arachnids. I'd also like to mentor students, especially future women in STEM. I'd like to give back in same way my mentors have--I would not be where I am had they not taken a chance on me.”

We looking forward to hearing more about these outstanding young scientists and their projects! 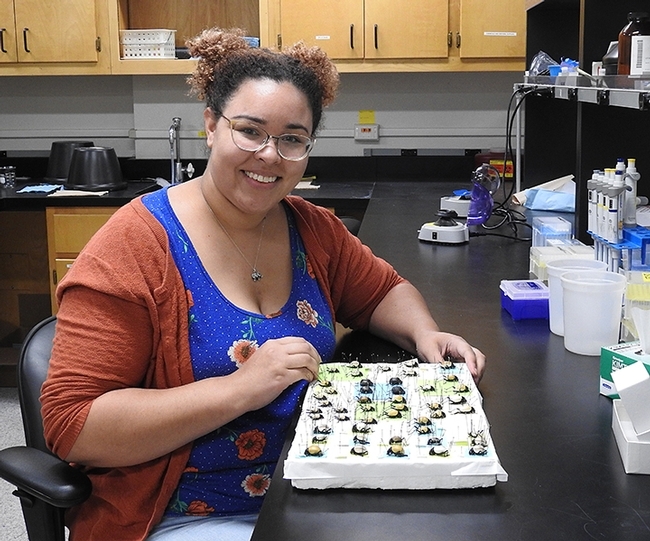 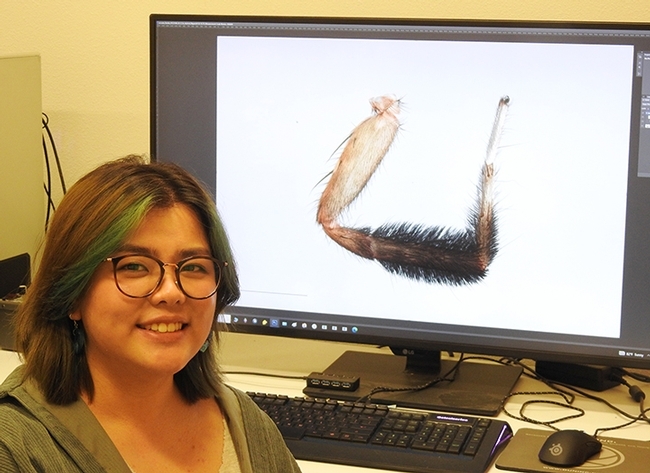