Entomologist Christine Melvin dressed as a monarch.
A newly created, unveiled banner for the Bohart Museum of Entomology's 75th anniversary drew "oohs" and "aahs" when the Bohart Museum Society hosted a Halloween party last Saturday on the UC Davis campus.

Melvin's artist statement: "It was a pleasure to create an image in honor of the 75th anniversary for the Bohart Museum of Entomology. I spent countless hours at the museum as an undergraduate student and learned so much from so many people who all shared a love for entomology. I wanted the image to include a diverse group of insects, a few California native plants and a banner; all in a heart shape of sorts. The bleeding heart flowers on the left are being visited by a hover fly from the order Diptera. The California poppies on the right have a thread-waisted wasp from the order Hymenoptera on top. On the stem of one of the poppies is an aphid from the order Hemiptera that is being hunted by a snakefly (far right) from the order Neuroptera. In the center of the image, flax flowers are being visited by Franklin's bumble bee, from the order Hymenoptera, in honor of the late Dr. Robbin Thorp. At the bottom right is a tardigrade, which visitors will find a statue of outside the museum building. Finally on the lower left-hand side is a twisted-winged parasite, from the order Strepsiptera, in honor of Dr. Bohart himself."

The Bohart Museum's tardigrade collection includes some 25,000 slide-mounted specimens. It ties in with the 2,112-pound tardigrade sculpture, created by artist Solomon Bassoff of Nevada County, that graces the entrance to the Bohart Museum.

Melvin, who received her degree in the spring of 2017 and moved to the Big Island in July 2019, is on track to receive her master's degree in entomology (distance-learning)  through the University of Nebraska-Lincoln.

"Shortly after moving here, the pandemic began which allowed me a rare chance of living in Hawaii when there were no tourists; I am truly grateful for that experience," she related. "The down-time from the pandemic has also allowed me to really focus on my MS degree which will be complete in the spring of 2022."

For her master's project, she will create an illustrated guide to the butterflies of Northern Yosemite with a heavy emphasis on life history and citizen science. "I am still working on the title," Melvin said. "The courses taken to complete my MS degree included specialized and general entomology, scientific illustration and science communication. It is my goal to make this the first of many entomology focused and illustrated publications to encourage and honor citizen science."

"I will be returning to the mainland in January of 2022 because as much as I love Hawaii, there are more insects on the mainland and I miss them!"

Bohart Museum and Director Toasted. Rain dampened the Crocker Lane event but not the enthusiasm as the crowd toasted the work of the Bohart Museum and its director Lynn Kimsey, UC Davis distinguished professor of entomology. Bond, who was named Associate Dean for Research and Outreach for Agricultural Sciences, the College of Agricultural and Environmental Sciences on Oct. 25, said museum collections have “tremendous educational value and they also have amazing research value as well.”

CrowdFund Project. Bond urged the crowd to help support the outreach mission of the museum. Bohart Museum scientists are seeking donations for their traveling insect specimen displays. They aim to raise $5000 by 11:59 p.m., Oct. 31 for their UC Davis CrowdFund project to purchase traveling display boxes for their specimens, which include bees, butterflies and beetles. These are portable glass-topped display boxes that travel throughout Northern California to school classrooms, youth group meetings, festivals, events, museums, hospitals--and more--to help people learn about the exciting world of insect science.

“When COVID halted our in-person outreach programs, we were still able to safely loan these educational materials to teachers,” said Tabatha Yang, the Bohart Museum's education and outreach coordinator.  “Now that UC Davis is open again to students we have all these bright, students on campus with fresh and diverse perspectives. We want to support their talent, so the funds we are raising will go to students for the creation of new traveling displays. This fleet of new educational drawers will expand and update what we can offer. Some of our current displays were created 15 years ago! One can only imagine all the places these drawers have been and all the people who have been inspired."

Donors can do so in memory of someone, a place, or a favorite insect. Bond donated $500 in honor of Lynn Kimsey. The donation page and map are at https://bit.ly/3v4MoaJ

The Bohart Museum, currently closed to the public due to COVID-19 precautions, is located in Room 1124 of the Academic Surge Building on Crocker Lane. In addition to its insect collection, the seventh largest in North America, it houses a live “petting zoo,” comprised of Madagascar hissing cockroaches, stick insects and tarantulas, and a gift shop (now online), stocked with insect-themed t-shirts, hoodies, jewelry, books, posters and other items. Further information is on the website at https://bohart.ucdavis.edu. 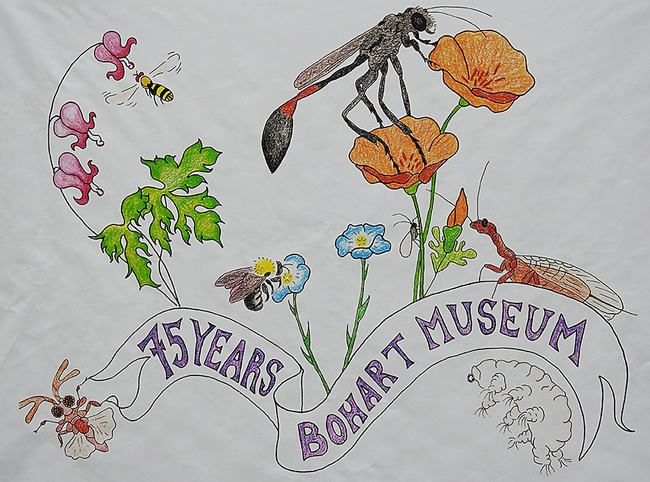 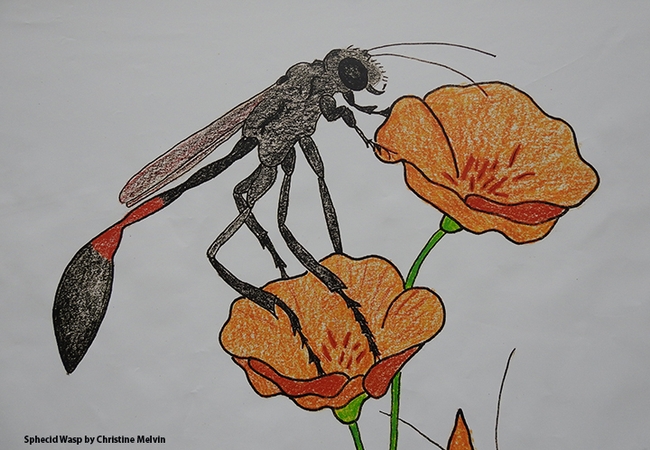 Close-up of a drawing of a sphecid wasp by Christine Melvin.