Jeff Smith spreading wings. (Photo by Kathy Keatley Garvey)
A “neighborly” project by entomologist Jeff Smith, the volunteer curator of the worldwide Lepidoptera collection at the Bohart Museum of Entomology, University of California Davis, has ended on a sweet note that will benefit the museum.

When Smith provided 10 framed insect displays for wall decorations at the Neighborly Pest Management, Roseville, the president-owner James “Jim” Steed gifted him with $1500, which Smith promptly donated to the museum.

"Jim knew that his check would be a donation to the Bohart Museum," Smith said, "and that was the reason for his generosity. As a past president of the statewide Pest Control Operators of California (PCOC) and the local chapter, Jim had previously gotten nice checks into the Bohart's hands and has high praise for the value of the museum."

Smith, a longtime friend and colleague of Steed (since 1993),  requested $500. “Jim thought that was far too low,” Smith said, adding “It's a wonderful company.  Neighborly Pest Management has been in business since 1978, nearly 45 years, and is one of the most forward-thinking and professional companies I've ever known.”

“They recently did a magnificent job of remodeling the interior of their office—they did it themselves--and wanted to decorate the walls with something entomological,” Smith related.  “Since I've made these framed displays before, they thought that was perfect and said they'd like all I could make for them and would pay top dollar.” It's intricate work. (Photo by Kathy Keatley Garvey)
“For 10 displays, I suggested maybe $50 each, and Jim looked surprised and said he was thinking twice that. Obviously, it turned out to be three times that!”

“The insect specimens,” Smith said, “are primarily from surplus material from that massive Chiapas, Mexico donation of papered bugs the Bohart Museum received in 2019, all collected in 1971-1974 by the renowned Lepidopterist Robert Wind, (1912-1975). His niece lives in Rio Linda and she was the family member who ended up with the huge amount of material that no other relative wanted.”

For the Neighborly Pest Management project, Smith spread all the specimens, including butterflies, bees and beetles, and created the frames, using “lots of surplus glass.”

“A flag on their wall was made from repurposed 2x6 redwood decking from the original owner's property and Jim said he wanted the USA flag to be the largest and most prominent thing in their office,” Smith commented.

Steed and colleague Ashley Clark, director and vice president of Allenstrategic Communications (Steed worked with her on pyrethroid training) founded a national movement, Black Ownership Matters, to find ways to encourage minorities, blacks in particular, to enter pest control management.  The two launched the project in 2020, on Juneteenth (June 19), a day that commemorates the official end of slavery in the United States. On their website, they emphasize creating equity and advancement in the pest control industry: "We are a community of individuals and organizations from across all backgrounds that have chosen to come together to support black economic advancement in the field of pest management."

“We have mentors and mentees in Black Ownership Matters,” Steed said. He recently took several mentees to a national pest management conference.

Said Smith: “They find ways to train them and get them started and they also encourage current black-owned pest businesses to continue to do well.”

Smith and Steed first met in 1993, the beginning of their 28-year friendship.  “It's a win-win for us,” said Steed. “We not only have these excellent framed specimen displays but we will always have of piece of Jeff in our office. He's a good man and we support him any way we can.”

Smith received the 2015 “Friend of the College” award from the UC Davis College of Agricultural and Environmental Sciences for his volunteer work in the Bohart Museum. Nominator Lynn Kimsey, director of the Bohart Museum and a UC Davis distinguished professor of entomology, said at the time that “Jeff has spread the wings of 200,000 butterflies and moths, which translates into something like 33,000 hours of work, over a 27-year period. He  has brought us international acclaim and saved us $160,000 through donations of specimens and materials, identification skills and his professional woodworking skills. This does not include the thousands of hours he has donated in outreach programs that draw attention to the museum, the college and the university.”  (link to https://ucanr.edu/blogs/blogcore/postdetail.cfm?postnum=18627

To date, Smith has made 2,300 drawers for the museum, and about 350 to 400 are from repurposed redwood from old decks and old fences.  “I've spread, likely, a couple hundred thousand Leps,” Smith related. “I figure it at a rate of maybe 6,000 per year for the past 30 or so years. I started doing some sorting of the neglected Lepidoptera collection while it was still in Briggs Hall, and accelerated once it moved to the current location in the Academic Surge Building on Crocker Lane.

“Right now, I'm continuing to sort and spread Leps for (Bohart lab assistant) Brennen Dyer's Delta Project.” Smith is also working on trap-caught material from Texas, and on Nov. 11 will do an evening spreading class for the UC Davis Entomology Club.  For the occasion, Smith has crafted 40 new spreading boards and will supply the club with not only the boards, but pins and hooked probes,  and “a LOT of relaxed butterflies from Chiapas, surplus material we received in 2019.”

The Bohart lepidopterist also presents information on butterflies and moths via videos, Zoom meetings, and at open houses (currently on hold due to the COVID-19 precautions).

Smith, who moved to Rocklin from San Jose in 1987, was introduced to the  Bohart Museum  collection in 1988 (then at Briggs Hall) and began volunteering that year. He is the sole curator of the Lepidoptera collection. In addition to the pens, the entomologist has also “made a lot of gifts to give to friends, including kitchen cutting boards, tissue box covers, and miscellaneous other things as needed.”

“I love the creativity,” Smith said.

The Bohart Museum, home of a global collection of nearly eight million insect specimens. is located in Room 1124 of the Academic Surge Building  on Crocker Lane. The museum, currently closed to the public due to COVD-19 restrictions, is also the home of a live “petting zoo,” comprised of Madagasgar hissing cockroaches, stick insects and tarantulas;  and a gift shop (now online) stocked with insect-themed jewelry, t-shirts, hoodies, books, posters and collecting equipment.  The gift shop also includes Smith's finely crafted wooden pens. 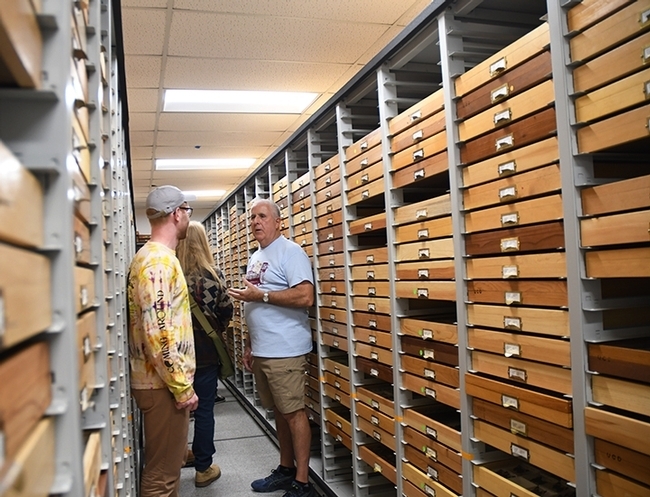 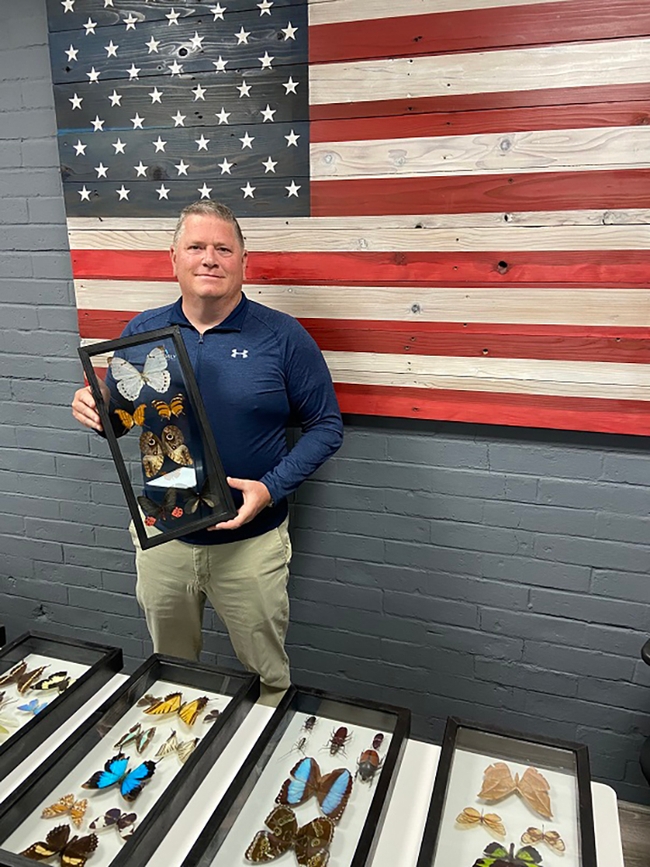 James "Jim" Steed, president and owner of the Neighborly Pest Management, Roseville, with some of the framed insect displays, the work of Jeff Smith. (Photo by Jeff Smith) 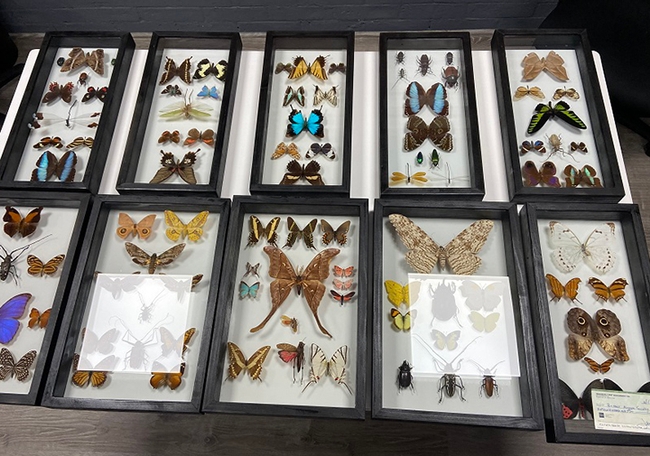