Let's pay special tribute to the servicemen and women who left the family farm to serve in our military. They were the farmers who fed the nation. And they became soldiers who defended our nation, much like guard bees defending their hives from intruders.

The late Harry Hyde Laidlaw Jr., (1907-2003),  a noted professor at the University of California, Davis,  was both a beekeeper and a military veteran. Harry spent his late boyhood and teen years in southeastern United States,  working as a beekeeper with his grandfather.  "Although he had never completed elementary school, he was able to enroll as a special student at Louisiana State University," according to a a UC memorial tribute. "In 1934 he completed a master's degree in entomology, and from there he went on to earn a Ph.D. in genetics and entomology from the University of Wisconsin in 1939."

Laidlaw went on to become renowned as "the father of honey bee genetics." (See his interview on Aggie Videos.)

But he was also an Army veteran. In 1942, he was inducted into the U.S. Army, commissioned, and served as the Army entomologist for the First Service Command in Boston, Mass. "He didn't see any war action, but I think he fought mosquitors on a base in Newfoundland," remembers his daughter Barbara Laidlaw Murphy. "Later he was stationed in Boston and that's how he met my mother. He stayed in the reserves and rose to the rank of lieutenant colonel."

If you visit the UC Davis bee biology facility, the Harry H. Laidlaw Jr. Honey Bee Research Facility located on Bee Biology Road, west of the central campus, you'll see a sign memorializing him. The sign, the work of Davis-based artist Donna Billick, creatively includes a hole in the skep for bees to tunnel to a hive located in back.   For years we saw bees entering with pollen, leaving to get more, and guard bees on duty. Due to liability issues, the hive is no longer there, but there are plenty of hives in the apiary behind the building.

Bees and veterans go well together. Take the Hives for Heroes, a national, non-profit organization founded in 2018 in Houston, Texas, to help America's military veterans by getting them involved in beekeeping. Hives for Heroes focuses on honey bee conservation, suicide prevention, and a healthy transition from service.  As their website says: "As a 501(c)3, Hives for Heroes gives back to veterans looking to start their beekeeping journey. Our organization is run by volunteers looking to serve those veterans who have selflessly served our country."

Our military veterans guarded and defended our nation. Now, in caring for their colonies in their newly acquired beekeeping roles, they can watch bees guard and defend their hives. 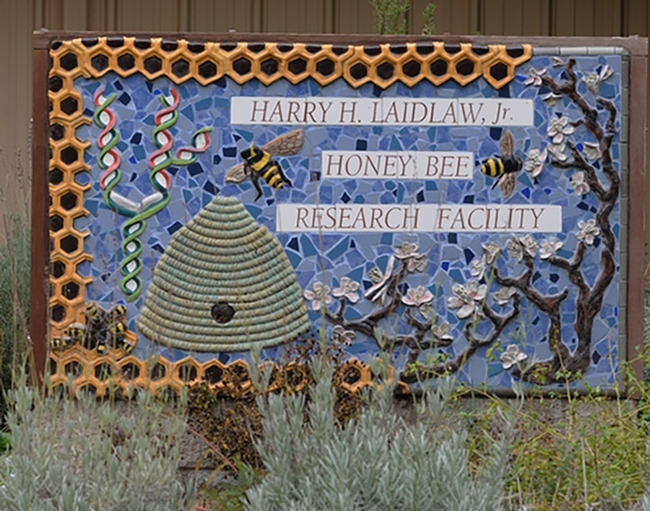 A sign in front of the Harry H. Laidlaw Jr. Honey Bee Research Facility at UC Davis includes a skep with a hole tunneling to a hive in the back. (Photo by Kathy Keatley Garvey) 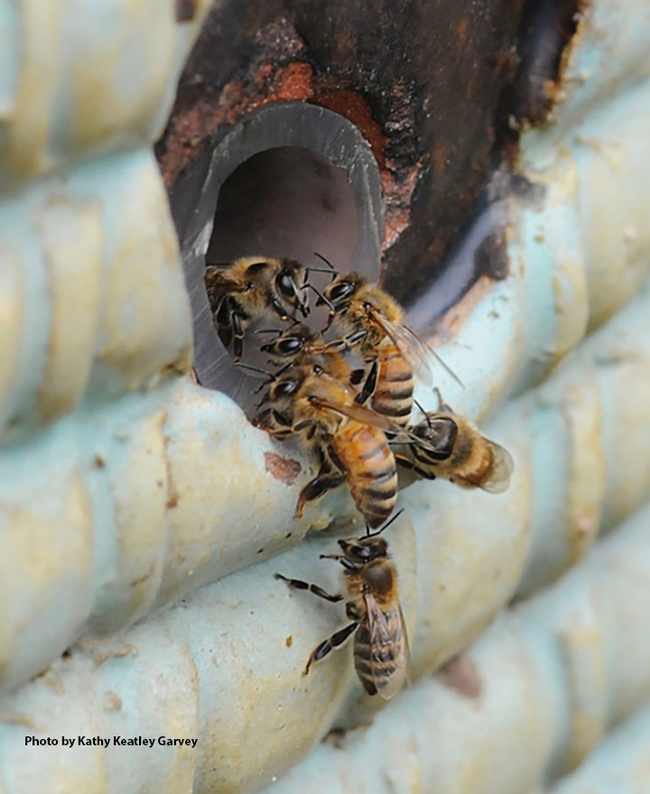